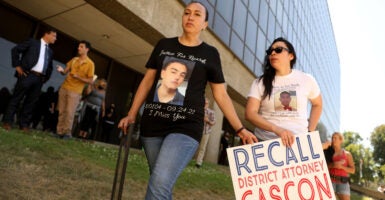 This commentary is part of a series on the rogue prosecutors around the country who have been backed by liberal billionaires such as George Soros and Cari Tuna, and the threat those prosecutors pose to crime victims and others alike.

It seems that voters in Los Angeles County have had enough of rogue prosecutor George Gascon’s policies, and are one step closer to showing him the exit.

On Thursday, the Recall Gascon team delivered 715,833 signatures of Angelenos to the Los Angeles County registrar-recorder, far exceeding the 566,000 signatures needed to put Gascon on the ballot this fall for a recall election.

On Saturday, Dean Logan, the controversial registrar-recorder, issued a press release confirming that their raw count of signatures submitted was 715,833.  Logan’s office has until Aug. 17 to conduct a complete review and verification of the signatures in order to certify the recall.

If those signatures are officially verified and over the threshold amount, Gascon could be on the ballot for recall as early as November. If more than 50% of voters vote to recall Gascon, he will be removed from office, and a successor will be elected.

Gascon isn’t the only rogue prosecutor to face a recall this year. In June, San Francisco voters removed DA Chesa Boudin by a 55% to 45% margin. Boudin refused to prosecute drug and most property crimes, and he turned a blind eye to open-air drug markets, all of which contributed to a dystopian cityscape in San Francisco.

The effort to recall Boudin was organized and funded in large part by liberals who, although they voted for Boudin in the first place, eventually realized that Boudin’s rogue approach to prosecution was pushing businesses to close; exacerbating the drug, homelessness, and crime problems; and emboldening criminals.

As with Boudin, the move to recall Gascon comes in response to his rogue and radical policies, which have wreaked havoc in Los Angeles County.

His policy directives, which we wrote about in depth here, issued on his first day to his 1,000 deputy district attorneys, included prohibiting his prosecutors from asking for bail in most cases; refusing to prosecute most misdemeanors; prohibiting his prosecutors from filing sentencing enhancements and priors allegations for new crimes; refusing to prosecute violent criminals under the age of 18 in adult court; refusing to allow prosecutors to seek the death penalty, no matter the crime; resentencing between 20,000 and 30,000 convicted felons who had served at least 15 years of a life sentence or what he deemed a too-long sentence; and reversing convictions of violent felons if he suspected that race played a part in the conviction, even when the conviction survived an appeal.

The results of Gascon’s policies have been predictable: Crime exploded, victims have been ignored, and minorities have borne the brunt of the violence.

Watch what minority female victims had to say about Gascon’s policies at our Los Angeles symposium on rogue prosecutors.

As of May, crime has exploded in Los Angeles compared with when Gascon was elected in 2020:

And arrests, because of Gascon’s policies, are down 20.8%

In addition to Angelenos who may have to address the problem at the ballot box, many high-profile figures have openly criticized Gascon’s record.

After Boudin was recalled in San Francisco, Los Angeles County Sheriff Alex Villanueva called Gascon a “failed district attorney” and also criticized him in a discussion with us at our Los Angeles symposium.

Even Gascon’s own prosecutors don’t believe in his policies. The Association of Deputy District Attorneys, the union representing the 1,000 attorneys who work for Gascon, has filed two lawsuits against him.

Eric Siddall, a deputy DA and vice president of the association, said that Gascon’s programs “[make] sure that the most violent offenders and career criminals are not appropriately punished and held accountable.”

Kathy Cady, a former Los Angeles prosecutor, has stated that “[other prosecutors have] been telling [Gascon] since Day One that his policies are foolhardy and will result in people being harmed, communities being harmed, public safety being impacted. And he doesn’t care.”

Jonathan Hatami, a deputy Los Angeles County DA and supporter of the Gascon recall movement, has stated that Gascon has created an environment with “no accountability & no public safety.”

When Gascon wouldn’t let his attorneys attend parole hearings, Villanueva offered to send personnel from the Sheriff’s Department to support victims instead.

It’s now up to Logan to certify the signatures, but many are worried about his ability to be fair and impartial. According to his biography, Logan is an active participant in the Future of California Elections collaborative, which is associated with the James Irvine Foundation, which carries out charitable activities that cross over with some of liberal billionaire George Soros’ work.

There’s no evidence, at this point at least, that Logan has any ties to Soros or any of his affiliates. If such evidence surfaces, then Logan could have to recuse himself, since Soros was a major contributor to Gascon’s election.

Even if there is no Soros connection, there are other reasons to question Logan’s ability to conduct the recount in a fair and impartial manner.

He served as the director of elections for King County in Seattle during the contested race for governor of Washington state in 2004, which pitted Democrat Christine Gregoire against Republican Dino Rossi.

Rossi was up by 261 votes when all the votes were counted, but then, on the third recount, Logan found a few hundred votes to put Gregoire over the top and into the governorship. Naturally, there were lawsuits, and eventually a judge ruled in favor of Gregoire, but during the process, it turned out that hundreds of illegal felons’ votes were counted, among other irregularities.

Logan resigned in disgrace in 2006, and then headed south to Los Angeles.

It seems the rogue prosecutor social experiment is starting to unravel across the country.

Boudin was replaced by Brooke Jenkins, a former deputy district attorney in Boudin’s office, who left in protest over his rogue policies. In her powerful and inspiring acceptance speech, Jenkins said:

The paramount mission of the District Attorney’s Office is to promote public safety. … I will restore accountability and consequences to our criminal justice system here in San Francisco. Violent and repeat offenders will no longer be allowed to victimize our city without consequence.

We hope she follows through with that promise. All cities need a district attorney who pledges to restore accountability and consequences to their criminal justice system.

As for Gascon, he still has the opportunity to reverse course on his policies and restore that accountability.