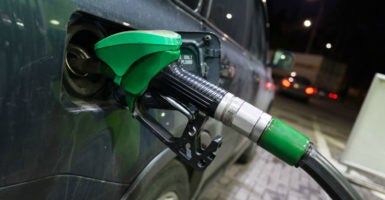 Open energy markets have produced enormous wealth for Americans and have lowered prices at the gas pump. (Photo: Ingram Publishing/Newscom)

Since Congress lifted the long-standing ban on crude oil exports, U.S. companies are taking advantage and Americans are reaping the benefits. This example shows how free market reforms can transform the energy sector and provide a massive boon to consumers.

In June, CNN reported that the U.S. reached a sevenfold increase in oil exports to countries other than Canada, which was excluded from the ban. In March, much of the non-Canadian exports went to Curacao, the Marshall Islands, Japan, Italy, Israel, and the Netherlands. Including refined petroleum products, the U.S. is now the world’s largest fuel exporter.

Americans will benefit through lower prices, too, as increased supplies reaching the global market will drive down the price at the gas pump. An IHS Inc. study predicts that exporting crude oil will lower gas prices 8 cents a gallon annually and that the exports could add 811,000 new jobs in 2017.

Open energy markets have important geopolitical and national security benefits as well. Increased supplies from a variety of producers reduce any one nation’s or entity’s ability to manipulate energy supplies for political or economic influence. More market suppliers can better respond to supply shocks.

While an important step, lifting the outdated ban on crude oil is far from the only measure Congress can take to improve America’s energy policy. To start, companies should have access to more of the country’s abundant natural resources. Underneath American soil and off American coasts sits 1.3 trillion barrels of technically recoverable oil, which is “enough to fuel more than 90 million cars and nearly 3.5 million homes for more than 50 years.”

Add centuries worth of coal and natural gas to the mix, and America is very energy rich. Regrettably, the federal government locks up these entirely or restricts access by making companies jump through onerous, duplicative regulatory hoops.

Both coal and natural gas industries face export challenges as well. The federal government throws up unnecessary obstacles to how much liquefied natural gas U.S. companies can export.

In addition to the burdens to accessing the oil supply, opponents of coal production are attempting to add unnecessary layers of regulation. Already faced with regulations, coal producers might be forced to submit comprehensive environmental impact statements.

This comprehensive review would assess the environmental and global warming effects not just from building a coal export terminal, but also from the mining, rail transportation, and end use of the coal. In other words, the review is another unnecessary way for anti-coal groups and government regulators to prevent coal producers from contributing to the growth of the U.S.’ energy sector.

Perhaps the most perplexing federal overreach is the Obama administration’s tariffs on importing its own politically preferred technologies. Despite the desire to replace conventional sources of energy with renewables like wind and solar, the administration has imposed tariffs on solar energy components in order to prevent subsidized U.S. manufacturers from having foreign competition. Protectionist tariffs will only keep prices higher, ensuring that the technology is less competitive. Tariffs will also reduce incentives for domestic manufacturers to innovate and lower their costs.

The rise of crude oil exports is a welcome sign, but there’s more work to be done. Congress and the next administration must take steps to continue to liberate America’s energy sector.