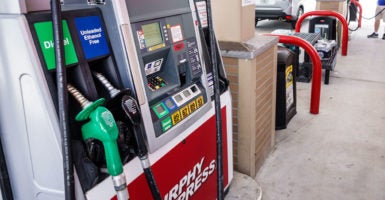 Projections that gas prices could soon fall below $2 per gallon would usually be cause for celebration. Pictured: Murphy Express in Fort Myers, Florida. (Photo: Jeffrey Greenberg/Education Images/Universal Images Group/Getty Images)

Warmer weather usually means more people getting out and driving—to stores, restaurants, baseball games, or sometimes, just to drive. Projections that gas prices could soon fall below $2 per gallon would usually be cause for celebration. But these aren’t usual times, are they?

The reality is the implications for the U.S. economy are unclear. They depend on a range of unpredictable events in the months ahead.

But first, here’s what we do know. Coronavirus has dampened demand. Curtailed production in Chinese factories, cancelled, conferences and less travel have decreased consumption. The International Energy Agency recently reported that oil consumption for the first quarter of 2020 is 2.5 million barrels per day fewer today than it was a year ago. The agency projects global oil demand will fall for the first time since 2009.

With demand slumping, conventional thinking was that the Organization of Petroleum Exporting Countries and Russia would agree to cut production in an effort to prop up crude oil prices. Petroleum revenues account for a sizeable chunk of these countries’ budgets.

Regardless, Saudi Arabia responded by discounting its oil sales at unprecedented levels to retain its market share and stick it to Russia for failing to agree to the price cuts. The result has been that oil prices plunged nearly 25% in recent days, marking the largest one-day drop in nearly 30 years.

What does this mean for the United States? The short answer is: It depends. Cheaper gas acts like a tax cut, providing more disposable income to families. America’s energy consuming businesses will save big, too, passing savings onto consumers.

Cheaper gas prices can also help boost consumer confidence that has been shaken in the wake of coronavirus. Researchers at the Loyola University Maryland and the University of Maryland, Baltimore County found that gas price decreases positively impact consumer sentiment.

However, for a country that has ascended to become the world’s largest oil producer, the news is not all good. 2020 is shaping up to be a challenging year for the industry. While many companies have hedged against low prices, prolonged periods in the $30 per barrel range will lead to layoffs, less capital expenditures, bankruptcies, and consolidations.

No matter what financial woes lie ahead for the U.S. oil industry, a taxpayer-funded bailout isn’t the answer. Though the industry hasn’t asked for one, some within the administration are floating the idea of a “financial relief” package.

Doing so would be a terrible idea. As George Mason economist Pete Leeson notes:

Profits and losses do for producers what traffic signals do for drivers. They tell them when to ‘go,’ ‘slow down’ and ‘stop’ their productive activities. By communicating which resource combinations consumers value most and which they don’t, profits and losses direct ‘economic traffic,’ informing producers how to produce. If government prevents ineffective producers from failing, the red light on the ‘economic traffic signal’ stops working.

Allowing markets to self-correct will be best for taxpayers, consumers, and the overall long-term health of America’s energy economy.