Meet Kim Foxx, the Rogue Prosecutor Whose Policies are Wreaking Havoc in Chicago 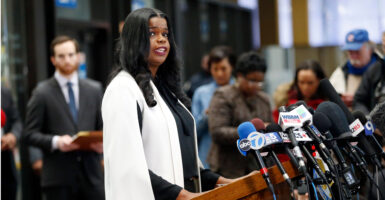 Cook County State's Attorney Kim Foxx—seen here at the Leighton Criminal Courthouse in Chicago on Feb. 23, 2019—has presided over a sharp increase in homicides in her first term in office. (Photo: Nuccio DiNuzzo/Getty Images)

The first war zone was Iraq. The second was Afghanistan. The third is Chicago.

To put this in perspective, in only four years, the number of Chicagoans who were shot equaled more than half of the total number of troops wounded in action in Afghanistan over a 13-year period between October 2001 and December 2014.

Keep in mind that crime rates in the United States as a whole have been declining over the past 20 years, including murders, rapes, and other violent crimes. Yet, Chicago still routinely tops the annual crime statistics for the absolute number of homicides committed within its boundaries.

But rather than implementing policies to combat violent crime there, Cook County State’s Attorney Kim Foxx is contributing to it by enacting her “progressive” agenda that, truthfully, can be more aptly described as lawlessness.

Just like other elected rogue prosecutors in cities such as Baltimore, Philadelphia, Boston, and St. Louis, violence is a big problem in Chicago under Foxx’s leadership.

Foxx was a harbinger of things to come, when four years ago she became the first George Soros-backed rogue prosecutorial candidate to win.

The Washington Post said that, at that time, he had “plunked $300,000 into a [political action committee] created to elect Kim Foxx.”

Up for reelection this year, Foxx again is the beneficiary of Soros’ largesse, as he has already pumped at least $2 million into the Illinois Justice & Safety PAC to help her get reelected.

But what’s all that money buying? And why is Soros so interested in county district attorney races?  As we’ve written elsewhere, it’s because he and his prosecutorial puppets are seeking to “reimagine” and fundamentally transform our criminal justice system from an adversarial system pitting prosecutors against defense counsel, to a system where criminal defense attorneys, beholden to the movement, take over DA offices and enact nonprosecution policies.

If they succeed, it won’t be “reimagined,” nor fundamentally transformed for the better.

In August, the Chicago Tribune conducted an analysis showing that “Cook County State’s Attorney Kim Foxx is dropping felony cases involving charges of murder and other serious offenses at a higher rate than her predecessor … .”

In response, Foxx said that “her office has dismissed cases against low-level, nonviolent offenders so prosecutors can concentrate on crimes of violence.”

That’s the same false response that Larry Krasner, the rogue DA of Philadelphia, has been giving. The problem is that the numbers don’t lie.

The Tribune found that “Foxx’s higher rates of dropped cases included people accused of murder, shooting another person, sex crimes, and attacks on police officers—as well as serious drug offenses that for decades have driven much of Chicago’s street violence.”

The picture is just as ugly when you look at conviction rates under Foxx’s leadership.

Foxx claims, with a straight face, that “she is more selective about prosecuting the strongest, winnable cases.” Again, however, facts are stubborn things.  Her predecessor won convictions in 75% of the felony cases her office tried during her last three years in office, while Foxx’s office has won only 66%.

Foxx’s ‘Get Out of Jail Free’ Policies

In the wake of Foxx’s efforts to pursue bail reform policies, more individuals have been placed on electronic home monitoring—apparently with no consequences for violating their bail terms.

According to the Tribune, “About 400 people are charged every year with felony escape. During [her predecessor’s] last three years in office, she dropped a total of 55 such cases, compared with 420 for Foxx.”

Chicago police have pointed to the “skyrocketing use of electronic monitoring as a key factor in the city’s shocking 50% rise in killings this year.” To date in 2020, 645 people have been slain in Chicago. That’s a 51% increase from 2019.

If these numbers seem shocking, it’s because they are.

On top of all that, who can forget the Jussie Smollett debacle that Foxx tried to get away with?

If you need a reminder, it’s the case in which a television actor faked a ‘‘hate crime” against himself.  Why? We wrote about it here.

The whole Smollett affair stinks, and Foxx’s fingerprints are all over the case.

But more shocking than that was the fact the Foxx’s office dismissed all of the charges in the 16-count indictment against Smollett a mere three weeks after a grand jury had issued it.

Many people were rightly troubled by that turn of events. Then-Chicago Mayor Rahm Emanuel asked, “Where’s the accountability in the system?  You cannot have, because of a person’s position, one set of rules applies to them and another set of rules apply to everyone else.”

There were also troubling emails from a former Obama administration official, Tina Tchen, to Foxx, in which Tchen weighed in on Smollett’s behalf.

All of those questions needed answers, so an Illinois court appointed former U.S. Attorney Dan Webb to investigate.

While he cleared Foxx and her office “of any criminal activity or claims that it responded to improper outside influence when it dropped the hoax” charges, as Reuters reported, he did find that “Chicago prosecutors abused their discretion and may have violated legal ethics by dropping charges that former ‘Empire’ actor Jussie Smollett falsely reported he was attacked.”

He found “substantial abuses of discretion and operational failures” in Foxx’s office. And, he said that “county prosecutors, including State’s Attorney Kim Foxx … made false statements that may violate state legal ethics rules.”

Foxx’s office, of course, disputes those claims—just as she “insisted [the Law Enforcement Legal Defense Fund was] manipulating data to fit their political agenda” when it released a report highlighting troubling statistics coming out of her office.

As we wrote in our commentary about Marilyn Mosby and Larry Krasner, the rogue prosecutors in Baltimore and Philadelphia, respectively, the Achilles heel for the rogue prosecutor movement is the fact that crime rates, especially violent crime, rise in cities where they are in charge.

When you listen to them talk, they use the same pet phrases: mass incarceration, structural racism, prosecutorial discretion, the school-to-prison pipeline, restorative justice, reimagining policing or prosecution, overpolicing, institutional change, and the so-called “correctional free lunch.” The latter would require prosecutors to take into consideration the cost of incarcerating people.

To date, Foxx cannot explain why there are so many homicides in Chicago, nor have any of her policies helped to stem the bloodshed in what amounts to a combat zone.

Foxx, the first Soros-backed rogue prosecutor, has been a failure as the Cook County state’s attorney, if you measure the success of an elected district attorney by reducing crime, making the community safer, making the criminal justice system better for everyone, and faithfully enforcing the law as written.

On the other hand, one could argue she has been a success as a rogue prosecutor, if you measure “success” by engaging in selective nonprosecution, giving criminals the benefit of the doubt, of blaming law enforcement and not standing with them to improve the criminal justice system, and if you don’t care about all black lives.

The fact is that most of those slain under Foxx’s haphazard and questionable leadership are black, and her policies harm the very communities she pretends to care about the most.