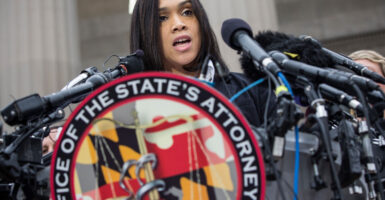 Baltimore City State's Attorney Marilyn Mosby, seen here on May 1, 2015, has presided over a sharp increase in crime in the city since taking office in January of that year. (Photo: Andrew Burton/Getty Images)

Do the residents of Baltimore ever look back on the TV series “The Wire”—which aired from 2002 to 2008—with its focus on guns, drugs, and gangland violence as the “good old days,” when violent crime was low and life was good?

And Baltimore City State’s Attorney Marilyn Mosby deserves a large part of the blame—as do her liberal billionaire backers.

Since she was first sworn into office in January 2015, homicides, rapes, aggravated assaults, burglaries, and robberies in the gritty city have exploded.

As one FBI chart shows, once Mosby took command, homicides skyrocketed in Maryland, because the vast majority of Maryland killings take place in Baltimore city. (We focus here on the city of Baltimore, as distinct from Baltimore County, which has its own elected state’s attorney.)

But that’s not all. As the chart (Figure 1) from Johns Hopkins University shows, once Mosby took over, all manner of violent crime in Baltimore city shot up, too.

That increase is even more shocking when you consider that violent crime across America—including homicides—has been falling for more than 20 years.

Yet, in cities that have elected rogue prosecutors, such as Baltimore, violent crimes have shot up dramatically.

So, how did Baltimore get here, with an elected prosecutor who doesn’t want to prosecute broad swaths of the criminal code?

Liberal billionaire George Soros realized early on that prosecutors are the gatekeepers to the criminal justice system, and he decided to hand select attorneys who would do his bidding by refusing to prosecute entire categories of crimes, fundamentally “reimagining prosecution” and reverse-engineering the criminal justice system into something unrecognizable in the process.

There are four fundamental problems with this rogue prosecutor movement.  First, rogue prosecutors usurp the constitutional role of the legislature by refusing to prosecute entire categories of crimes. Second, they abuse the role of the county prosecutor by refusing to faithfully enforce the law. Third, they contribute to increases in violent crime in their cities through their reckless policies. Fourth, they ignore victims, in addition to public safety suffering overall.

So, when Soros decided back in 2014 to spend millions to fund the election efforts of rogue prosecutors, one of the first people he backed was Marilyn Mosby in Baltimore city.

The crime statistics, reported each year by jurisdictions to the FBI, tell the story.

In the eight years before Mosby was elected, there were fewer than 300 homicides per year in Baltimore city, averaging 229 per year.  Every year since Mosby has been in office, there have been more than 300.

Between 2015 and 2019, there was an average of 331 homicides each year, a whopping increase of 102 killings per year. The vast majority of those killed are African-Americans, the very people Mosby claims to care about the most.

Put another way, from 2015 to 2019, there were 1,659 homicides in Baltimore city, meaning that about one out of every 350 residents was slain during that time frame.

For 2020, under Mosby’s leadership, Baltimore is on pace to have the most homicides since she was elected. As of Oct. 26, there have been 271 homicides.

Rapes have gone up as well. The average number of rapes per year in the five-year period before Mosby was elected was 292 annually. Since Mosby was elected, the average has been 330 per year.  In other words, there were 190 more people raped in the first five years of Mosby’s tenure, compared with the five years before she assumed office.

Aggravated assaults, which can include the use of a gun, have predictably soared under Mosby’s tenure as well.

Under Mosby’s hands-off approach to enforcing the law, Baltimore city has become the most dangerous city in the country for robberies.

Put another way, 7,541 additional people were robbed, many at gunpoint, while Mosby acted as Baltimore’s gatekeeper to the criminal justice system.

It’s so bad that even the deputy police commissioner and his wife were robbed at gunpoint in 2019. In fact, in 2019, Baltimore city was the No. 1 city in America for robberies, topping out at 95 robberies for every 100,000 residents.

The Achilles’ heel for the rogue prosecutor movement is the fact that crime rates, especially violent crime, rise in cities where they are in charge.

When you listen to them talk, they use the same pet phrases: mass incarceration; structural racism; prosecutorial discretion; school-to-prison pipeline; restorative justice; reimagining policing or prosecution; over-policing; institutional change; and correctional-free lunch. The latter would require prosecutors to take into consideration the cost of incarcerating people.

On Feb. 7, Mosby participated in a discussion at the Hastings School of Law at the University of California in San Francisco with three other prosecutors. The topic was “Progressive Prosecution and the Carceral State.”

When McGregor Scott, a fellow panelist, former elected California district attorney, and sitting U.S. attorney, made the point that violent crime was rising in Baltimore under her non-prosecution policy, Mosby said defensively, “You’re not from Baltimore” and claimed that Scott’s crime statistics were just “rhetoric.”

But Mosby never rebutted those statistics, because they were correct. (See the exchange here at 2:24:49.)

Check Out Numbers Yourself