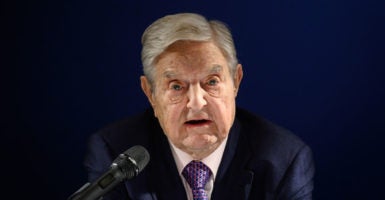 In Virginia’s Fairfax and Arlington counties, the “reformer” attorneys ran on platforms far to the left of the Democratic incumbents, beating them in primary races before ultimately winning the general elections.

In both cases, the incumbents expressed concern for public safety if the Soros-backed candidates took control. They also said that the activists were pushing a national platform about racism and over-incarceration that had no basis in reality in the affluent, liberal jurisdictions.

After losing the Democratic primary to Soros-backed Steve Descano, Fairfax’s longtime prosecutor, Ray Morrogh, warned his fellow party members that safety could be at risk if they elected Descano in the general election. He quit the party to endorse Jonathan Fahey, an experienced prosecutor who was running as an independent, to try to avert a Descano victory.

Descano “is completely unqualified for the office of commonwealth attorney,” Morrogh said in a video. “The only case he tried, he disgraced himself when the judge reversed the conviction because [he] lied in closing argument. This man is not fit to hold office in Fairfax County.”

“I’ve dedicated 36 years of my life to keeping you safe in Fairfax County, and I’ve never asked for anything,” Morrogh continued. “But I love my country, I love this county, and I believe in public safety. I’m asking you, vote for Jonathan Fahey for all the victims in this county.”

Descano narrowly beat Morrogh in the primary after receiving $400,000 from Soros’ PAC, financial disclosures show. Morrogh raised $250,000, with no one donor giving more than $10,000.

Fahey told The Daily Caller News Foundation, “The weird thing is, as a result of Soros pouring money into low-turnout primaries, center-left voters are unquestionably more closely aligned to the Republican candidates than they are to these radical challengers. If the citizens were informed they’d never vote for this.”

With little media coverage of suburban politics, locals seemed unaware of the schism between traditional Democrats and the far-left candidates backed by the New York billionaire’s political fund, Fahey said. Even though Descano only narrowly won the primary with 51% to Morrogh’s 49%, Fahey—the candidate endorsed by Morrogh—received only 38% of the vote in the general election.

Descano received another $200,000 from Soros’ PAC during the general election, while Fahey raised $240,000 with no single massive donor, according to the most recent financial disclosures.

“People just went in and voted party ballots. They tell themselves they’re somehow sticking it to [President Donald] Trump by voting for someone unqualified to be the local prosecutor,” Fahey told The Daily Caller News Foundation. “They want to make a stand, but it’s like, you have a chance to do that and it’s in 2020. It’s self-destructive how Trump kind of owns the Democrats mentally.”

“We have a world right now where the president picks the U.S. attorneys and George Soros picks the top state prosecutors. And that’s a scary world to live in,” he said.

“The Dem politicians don’t actually want it to happen, but they’re afraid to stand up to it because they don’t want to be the next one to be primaried,” Fahey continued. “And the Republicans, I don’t know why they aren’t willing to put resources into pushing back on this.”

The Soros candidates ran on a platform of not prosecuting certain crimes and charging others as misdemeanors when state law says they’re felonies. “Virginia’s felony larceny threshold of $500—the value of stolen goods that gives rise to felony charges instead of misdemeanor charges—is much too low,” Descano wrote in campaign materials.

But prosecutors like Morrogh insisted that regardless of how they feel personally, it is up to the state legislature to pass or repeal laws.

“We are a nation of laws, not men,” Morrogh said, Sun Gazette Newspapers reported. “I’m not a super-legislator.”

Fahey told The Daily Caller News Foundation, “You take an oath to enforce the law and do so fairly and impartially, not just the laws you like or the ones that are popular within your party … If a Republican candidate won and said, ‘I’m pro-gun so I’m not going to enforce any gun laws,’ people would be up in arms.”

Descano has said he won’t charge theft under $1,500 as a felony.

“Property crimes will go up, more victims. Police are so demoralized by this that good police are going to leave, so quality of policing will go down within a year,” Fahey said. “Criminals know where they can commit crimes and not get in trouble, and they will come here.”

“In California they did the same thing and theft is up dramatically,” he continued. “California is our future other than we don’t get the weather. If you look at objective data, it doesn’t work. But Soros has nothing at stake, if it goes poorly here he’s not harmed.”

Police Benevolent Association of Fairfax County President Andrew Wright said in a statement that “The stated goals of Mr. Descano to decrease or eliminate the prosecution of minor theft and drug cases will change our county for years to come.”

An Inner-City Movement Implanted in the Suburbs by a Billionaire

Soros’ out-of-state group, the Justice & Safety PAC, pushed candidates running on a platform about “criminal justice reform” that originated out of the identity politics movements in inner cities. But this year’s batch ran in quiet, affluent suburbs where those issues plainly didn’t apply, Fahey and Arlington’s Democratic prosecutor said.

“If you take away Soros, there is no organic ‘criminal justice reform’ movement in these counties,” Fahey told the DCNF. “No one is really wanting it, and they’re going to do it anyway.”

“I will tackle mass incarceration by ending the practices of charging felonies where misdemeanors are sufficient and charging misdemeanors where a dismissal or diversion would be more appropriate,” he wrote, adding that he believes prosecutors over-charge crimes. “The numbers don’t lie. Far too often race and ethnicity are determining factors in the outcome of one’s experience with the criminal justice system.”

Chap Petersen, a Democratic Virginia state senator who represents Fairfax, said in a Washington Post op-ed that Descano ran primarily on a false narrative that had no applicability to the county.

“A few months ago, Fairfax County was the envy of American municipalities for its system of law enforcement,” he wrote in June. “Its crime rate was the lowest of any jurisdiction with more than 1 million residents in the United States. Its jail population was at its lowest point in 40 years. The county had successfully implemented jail diversion programs for veterans and drug courts to treat the addicted.”

“Morrogh was outspent 2 to 1; his message of quiet competence was drowned by out by a mail and canvassing campaign that used words such as ‘racial profiling’ and ‘mass incarceration’ in describing Fairfax County’s criminal-justice system,” Petersen wrote. “The fact that these buzzwords were largely irrelevant in the low-crime, progressive county didn’t matter. It was a winning message in a primary focused on hardcore partisan voters. By a narrow margin, the Soros-funded campaign was able to unseat Morrogh in favor of a ‘progressive’ champion who has never tried a case in a Virginia courthouse.”

Petersen has fought against the influence of corporations who give large political donations, and said that Democrats should keep in mind that the effect was no less harmful when it was a progressive out-of-state billionaire exerting influence.

“The Soros episode has raised an entirely new cause d’etre: the wealthy dilettante—right or left—who seeks to impose his viewpoint on a jurisdiction (or jurisdictions) to which he has no evident connection,” he wrote. “Say no to billionaires.”

In Arlington, Democratic incumbent Theo Stamos lashed out at Parisa Dehghani-Tafti—who has no experience as a prosecutor—saying that the jail population was at a five-year low under her tenure and that there have been no Chicago-style racial unrest or high-profile police shootings in the tiny Washington suburb.

“Arlington County is of the most educated, progressive, engaged and enlightened communities in the country,” Stamos said, Politico reported in June. “To postulate that unbeknownst to this very active community for the past three decades, all under the watchful eye of Chief Judge William T. Newman, who is an African American pioneer in this community, there has been this malignant and oppressive force at work … is preposterous.”

“I’m not going to apologize for being a prosecutor,” she continued. “I think it’s very misguided to back away from the actual work of prosecution because that’s what does keep communities safe, it’s what gives voice to victims of crime.”

There was no independent or Republican on the ballot to challenge Dehghani-Tafti after her unexpected defeat of Stamos.

The organization is a “super PAC” that runs “independent expenditures” that support the candidates, meaning Soros’ staff was essentially controlling the bulk of the efforts—creating mailers and running polls and digital ads—and simply using the candidates’ names.

The PAC focused almost exclusively on D.C.’s Virginia suburbs, Federal Election Commission records show, and had a 100% victory rate there in the Nov. 5 elections. The only other candidate it backed, a far-left candidate running against a Republican in upstate New York, was defeated.

“George Soros doesn’t know a damn thing about me,” Sandra Doorley, who fended off that challenge, said.

In previous election cycles, Soros’ PAC helped install Kim Foxx, a Chicago prosecutor who gained notoriety for her role in the Jussie Smollett case, and Larry Krasner, a Philadelphia prosecutor who the city’s federal prosecutor blamed for a “culture of disrespect” after a felon allegedly shot six police officers in August.