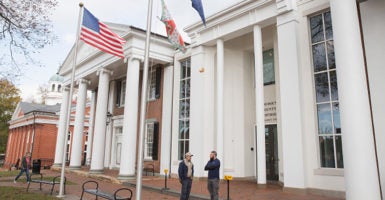 Parisa Dehghani-Tafti placed her left hand on her old law school textbook, “A Theory of Justice,” from New York University as she was sworn in Monday evening as commonwealth’s attorney for Arlington County, Virginia, and the neighboring city of Falls Church.

Dehghani-Tafti is one of three new progressive prosecutors seeking to “reimagine” law enforcement in the Washington suburbs of Northern Virginia. The others are in nearby Fairfax and Loudoun counties.

“Prosecutors had plenty of discretion when they were white men, trying to make the system more harsh. That’s the truth,” Dehghani-Tafti said Tuesday at a panel discussion in Washington sponsored by a liberal think tank, the Center for American Progress.

Commonwealth attorneys are the chief prosecutors of crimes for local jurisdictions in Virginia. Elsewhere, the position often is called district attorney or state’s attorney.

“The system isn’t broken. It’s functioning exactly how it’s supposed to function, and that is wrong,” Dehghani-Tafti said, referring to the criminal justice system. “What that has done is create an incredibly inequitable society.”

Left-wing billionaire George Soros began bankrolling the campaigns of local prosecutors across the country in 2016 and has continued to have success in electing liberals, often in larger cities. Of these three in Virginia, Soros reportedly was involved only in the campaigns in Fairfax and Arlington counties.

Until now, much of the electoral success of progressive prosecutors has come in major metropolitan areas. The Virginia wins marked a shift to the suburbs.

“Now that the face of prosecutors is different, and now that we are saying we need to reimagine the system, all of a sudden prosecutorial discretion is very, very bad,” Dehghani-Tafti said, adding: “As soon as women of color [who are] trying to reimagine the mass-incarceration machine and trying to change its direction show up, now discretion is suddenly not a good thing.”

Dehghani-Tafti was elected Nov. 5, as were Steve Descano in Fairfax and Buta Biberaj in Loudoun.

The three commonwealth’s attorneys agreed that prosecutors should consider the personal circumstances of criminal defendants that might have led them to commit crimes, and consider the impact on the defendant’s family in sentencing.

They also said commonwealth’s attorneys should prosecute fewer drug crimes and promote what they consider “smart-on-crime policies.” An example of the latter is focusing more on drug rehabilitation programs instead of “mass incarceration” for crimes such as theft that are rooted in drug addiction.

Criminal justice reform has drawn bipartisan support at the federal and state levels. A year ago this week, President Donald Trump signed into law the First Step Act, aimed at rehabilitation in hopes of curbing recidivism and at reducing mandatory minimum sentencing, among other things.

Fairfax County is one of the largest jurisdictions in the United States, Descano noted.

“People of Fairfax County deserve a criminal justice system that preserves their values and what they need today, not in the mid-’60s,” Descano said, after noting the county has had only two long-serving prosecutors in the past five decades.

“And, also, it’s important to realize that as part of this great progressive-prosecutor movement, we’ve seen that take hold in the big, urban cities—Philadelphia, Chicago, L.A.,” he said. “But, if it’s really going to thrive and survive, it needs to move out of the cities and into the suburban jurisdictions.”

Biberaj, elected as prosecutor for Loudoun County, said it’s OK to be tough on crime “but we can’t be stupid on crime,” citing the costs of mass incarceration.

“When 2016 happened, the elections were very devastating,” she said, apparently referring to Trump’s election, adding: “It made me feel very powerless  to think, ‘How did we get here?’ Then you start seeing what’s going on in our system and think, ‘Maybe I can’t change that level, but I sure as heck can change my local level.’”

Addressing a question about illegal immigration, Biberaj said her office would take a look at how enforcing certain laws would affect the accused.

“A lot of times when we have these convictions, what might otherwise be a low-level offense might be devastating to somebody’s ability to be able to remain in the country, and be able to remain with their family and remain in their community, remain and be an active participant,” she said. “These are things, as a policy in our office, we are going to take into consideration: What are the consequences to immigration status?”