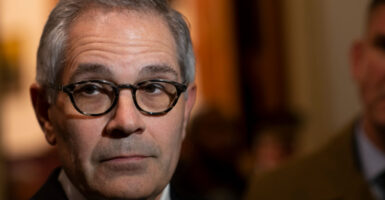 “F— the FOP [the Fraternal Order of Police]” and “No good cops in a racist system!”

Those are the sayings that supporters of Philadelphia District Attorney Larry Krasner chanted at his election-night victory party two years ago. Did he tell them to stop? No. Instead, he smiled approvingly.

Krasner, a career criminal defense and civil rights attorney, who had sued the Philadelphia Police Department dozens of times over the decades, ran to be Philadelphia’s district attorney and received almost $1.45 million in campaign spending from George Soros in the process.

Unfortunately, Krasner is one of many elected rogue prosecutors around the country who have usurped the legislative power by refusing to prosecute large categories of crimes. By refusing to hold criminals to account, Krasner and his ilk abuse the power of their offices and harm victims and their communities as a result.

A straight line can often be drawn from their anti-cop attitudes and their radically dangerous policies to increases in violent crime. And in Krasner’s case, even to the death of a Philadelphia police officer.

Let’s put it bluntly: Philadelphia Police Cpl. James O’Connor, a 23-year veteran of the Department, would likely be alive today if Krasner had done his job. Instead, Hassan Elliott, a career felon, parole violator, and wanted murderer, gunned down and killed O’Connor on March 13.

The United States attorney in Philadelphia, William McSwain, laid it all out this past March in a press statement, saying, “The murder was the direct result of Philadelphia District Attorney Larry Krasner’s pro-violent defendant policies.”

Sadly, O’Connor is but one of hundreds of victims at the hands of Krasner’s reckless rogue policies.

The press release outlines how Krasner’s office, following Krasner’s policy guidance, allowed Elliott to roam the streets and kill O’Connor, and includes disturbing facts such as:

As the press release from the federal prosecutor bluntly puts it, Elliott was “a gang banger wanted for murder,” yet Krasner’s office “did nothing.”

And that is just one of thousands of cases per year where Krasner’s office, following Krasner’s orders, does nothing instead of faithfully enforcing the law as written.

Immediately after he was elected and sworn into office, Krasner fired 31 career prosecutors in the office, many of whom were in the homicide division and highly experienced. Krasner didn’t do the firing himself; he had one of his top lieutenants do the dirty work, and that person told the career prosecutors they had hours to clear out their desks.

Since deputy district attorneys in the Philadelphia DA’s office serve at will, and don’t enjoy civil service protection, Krasner’s move was legal, but extraordinary.

Like many newly elected rogue prosecutors, Krasner also issued a non-prosecution policy memo to attorneys in his office soon after he was elected.

The Krasner memo required his assistant district attorneys to radically change the way they approach their job, including the following orders:

These are exactly the type of radical changes to a prosecutor’s office you would expect if you put a dyed-in-the-wool criminal defense attorney, beholden to Soros and his ilk, in charge of a district attorney’s office.

To highlight the absurdity of Krasner’s view of himself as the city’s “public defender with power,” imagine for a moment if the movement’s goal was the opposite: to place career, dyed-in-the-wool prosecutors into the role of head public defender in large jurisdictions, and have those public defenders instruct their deputy public defenders to encourage all or most of their clients to accept responsibility for their crimes, plead guilty, and not oppose the government’s sentencing recommendation.

Both movements, the rogue prosecutor movement and the hypothetical public defender/prosecutor movement, are radical departures from the adversarial system of justice we have in most places, where prosecutors prosecute and enforce the law, and defense attorneys defend the constitutional rights of those accused of crimes, and both handle their respective duties zealously, ethically, and aggressively.

Krasner’s office is essentially ignoring or refusing to prosecute lower-level offenses, such as possession of illegal drugs, loitering, violations of ordinances prohibiting public encampments, and the like, despite the fact that each is a crime under state law.

Two hundred and thirty-five additional murder victims, and counting. That’s how many extra dead people there have been in total in the city of Philadelphia since Krasner took over.

In the three years before Krasner was sworn into office, there were a total of 867 murders in the city of Philadelphia, an average of 289 murders per year.

As a result of Krasner’s hands-off approach, the U.S. attorney for the Eastern District of Pennsylvania (headquartered in Philadelphia) has picked up the slack by prosecuting violent crimes that can be charged in federal court.

McSwain, the U.S. attorney and a former Army Special Forces officer, has repeatedly called out Krasner, saying that his “radical experiment has failed,” that he is “fed up” with Krasner’s “new culture of disrespect for law enforcement,” and that you can “draw a straight line from these policies to the carnage on the streets.”

The number of auto thefts across the country have been going down for the last two years. But not in Philadelphia since Krasner was elected.

His non-prosecution policies have negative social consequences, and criminals who aren’t held to account affect the quality of life for all residents of Philadelphia.

In the two years prior to Krasner taking office, there were 11,187 car thefts, on average 5,594 thefts per year.

Commercial Burglaries Up 130% Over Last Year

You don’t have to click on hyperlinks to learn that commercial burglaries are up in Philadelphia. All you have to do is watch the television and see the rioting, destruction of property, and criminal behavior by thugs in downtown Philadelphia.

Aggravated Assaults with a Gun Up 42%

As we wrote in our commentary about Marilyn Mosby, the Baltimore rogue prosecutor, the Achilles heel for the rogue prosecutor movement is the fact that crime rates, especially violent crime, rise in cities where they are in charge.

When you listen to them talk, they use the same pet phrases: mass incarceration, structural racism, prosecutorial discretion, school-to-prison pipeline, restorative justice, reimagining policing or prosecution, over-policing, institutional change, and correctional-free lunch. The latter would require prosecutors to take into consideration the cost of incarcerating people.

To date, Krasner has refused to explain why crime rates have gone up under his watch, or how his non-prosecution policies have made the City of Brotherly Love safer.

No need to really, though, because we already know the answers.

Check Out the Numbers Yourself

Click on the links, by year, for crime statistics reported to the FBI.