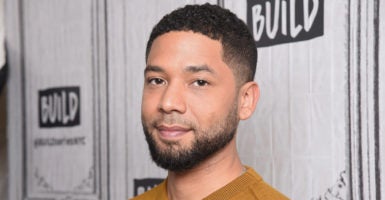 The Chicago police chief on Thursday said Jussie Smollett faked a hate crime against himself in order to advance his career. (Photo: Gary Gershoff/Getty Images)

Jussie Smollett, the now-disgraced actor from “Empire,” has turned himself in. Chicago police say he fabricated a hate crime against himself in order to get attention because he was dissatisfied with his salary. In this episode, we recount what happened, the media’s careless response, and what Smollett’s actions mean for the real victims of hate crimes. Plus: Daniel Davis, The Daily Signal’s commentary editor, sits down with Nick Adams, author of “Class Dismissed,” who argues that college isn’t for everyone—and that that’s OK.