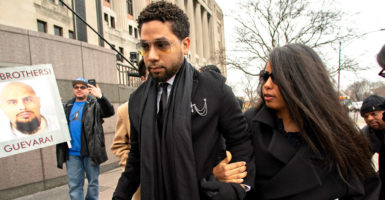 Jussie Smollett arrives Monday at the Leighton Criminal Courthouse in Chicago, where the actor pleaded not guilty to charges of disorderly conduct in a new criminal case connected to allegations that he staged hate crimes on himself. (Photo: Nuccio DiNuzzo/Getty Images)

Jussie Smollett was back in an Illinois court on Monday, and things are not looking good for the ambitious actor.

This time, an independent special prosecutor has filed a six-count felony indictment against Smollett in Chicago and his lawyers are crying foul, claiming the state already has prosecuted him for the same conduct.

It’s going to get interesting.

Before examining the new charges, and why the actor’s lawyers likely will fail to have them thrown out on grounds of double jeopardy, let’s review how we got here in the first place.

Despite his role in the Fox television series “Empire,” Smollett became a household name after allegedly staging crimes against himself and declaring himself a victim of hate crimes, which we elaborated upon in November.

In January 2019, Smollett, who is openly gay, said he received a hateful letter at the television studio where “Empire” is filmed. He said the letter contained white powder, showed a stick figure hanging from a tree, and contained cut-out letters saying, “Smollett Jussie you will die black f—.”

A week later, Smollett claimed that while he was walking home at 2 a.m. in Chicago’s Streeterville neighborhood, “two offenders who engaged in racial and homophobic slurs” assaulted him, poured a liquid on him, put a rope around his neck, and pulled him by the rope. Smollett claimed that at least one of his attackers was a white man.

However, police investigations soon revealed that the alleged attackers actually were two brothers from Nigeria whom Smollett had hired to do the deed. Police said Smollett paid the brothers $3,500 and gave them an additional $100 to buy supplies to stage the scene.

Smollett was indicted for 16 counts of disorderly conduct.

Kim Foxx, the state prosecutor for Cook County who undoubtedly will face an uphill battle in her quest for reelection this year, announced her recusal from the case. Initially, Foxx characterized her decision as a way to avoid seeming personally involved in the case because she discussed the matter with one of Smollett’s relatives after Michelle Obama’s former chief of staff, Tina Tchen, asked her to do so.

However, Foxx later changed her explanation and said an ethics officer had forced her to recuse because of the appearance that she was personally involved. In text messages released by Foxx’s office, Foxx referred to her recusal as “bulls—.” Without formally recusing, she gave Smollett’s case to an assistant and sent him a text calling the actor’s charges “excessive.”

Foxx’s office soon dropped all charges against Smollett. In exchange, Smollett forfeited his $10,000 bond and was given credit for 16 hours of community service. His case was then, for unexplained reasons, sealed.

The city of Chicago was not about to let Smollett walk away so easily, however. The city sued Smollett for the $130,106 that officials said was spent in investigating the fabricated crime.

In turn, Smollett, apparently happy to play the role of victim, countersued for malicious prosecution, despite the fact that the charges against him had been dropped.

Meanwhile, an Illinois state judge appointed Dan Webb as special prosecutor to figure out how Smollett could have been allowed to walk away essentially scot-free.

Last week, Webb indicted Smollett on charges of disorderly conduct under Chapter 720 Act 5 Section 26-1(a)(4) of the Illinois state code. Similar to the charges dismissed by Foxx, the indictment charges Smollett with falsely reporting the supposed attack to police, including allegations that his (paid) attackers used “racial and homophobic slurs;” “struck,” “punched,” and “kicked” him; “[put] a rope around his neck;” and poured bleach on him.

Smollett did this, the indictment says, even though he knew “there was no reasonable ground for believing that … [a criminal] offense had occurred.”

At the arraignment Monday on the new charges, Smollett’s defense attorneys argued that he can’t be prosecuted again for the same crimes by the same sovereign government, and that doing so violates his constitutional right against double jeopardy.

According to news reports, his attorneys tried to halt the arraignment and seek the Illinois Supreme Court’s review of their motion to dismiss the new indictment. But the trial judge went ahead with the arraignment anyway, and Smollett entered a plea of not guilty.

His claims of double jeopardy won’t fly, because when Foxx dropped the initial charges (most likely without prejudice, meaning they could be refiled), Smollett never was formally found guilty or not guilty of those charges.

This means that the state is free to refile charges in the future, even the same charges.

Where this case ends up is anyone’s guess. We finally may learn about the how and why of the Foxx-Smollett deal, and more about the inner workings and politics of the Cook County State’s Attorney’s Office during Foxx’s tenure.

Now that will be a show worth watching.