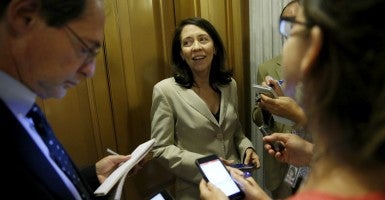 The Senate will soon vote on a bipartisan energy bill. Introduced by Sens. Lisa Murkowski, R-Ark., and Marie Cantwell, D-Wash., the Energy Modernization Act illustrates the wrong approach Washington takes when it comes to energy policy. Proponents claim that the bill is non-controversial. But for those concerned about government interference in the energy sector, the authors have planted red flags throughout the legislation.

Rather than remove market barriers, the legislation would extend and expand the federal government’s role in the energy economy. The additional amendments the Senate agreed to vote on merely make a bad bill much worse.

The bill contains money for career skills training to build expertise in installing energy efficiency technologies in buildings and other energy-related activities. However, the federal government cannot create a labor force out of thin air.

When Washington tries, it fails and wastes taxpayer dollars. When the government embarked on “green jobs” training programs in the 2009 stimulus bill, job placement was sparse, and much of the training was delivered to already employed workers who did not need the training to perform their jobs. If energy-efficient products and investments make economic sense, the government will not need to artificially create both the demand and the supply. As the private sector expands, it trains workers appropriately to meet demand—and it will make those investments with its own resources.

The legislation encourages renewable energy and efficiency retrofits at schools and non-profits and provides subsidies for manufacturers to improve energy efficiency. Markets drive energy efficiency and consumer and business savings without the help of the government or the taxpayer. The fundamental problem with the federal government’s efficiency measures is that they ignore the many diverse needs of American families and businesses, who ultimately are the best arbiters of efficiency and how to spend their money.

A one-size-fits-all regulation or subsidy to artificially elevate the importance of energy efficiency is not only wasting taxpayer dollars, it is skewing preferences and market activity. Businesses and families make energy-saving investments when it makes sense for them to do so. The paternalistic view of federal intervention in energy efficiency ignores the trade-offs, budget constraints, and payback periods that families and investors face, as well as the preferences they hold.

Several titles in the bill empower the federal government to allocate how energy investments are made. For instance, the bill would provide subsidies for hydroelectric production, demonstration projects for geothermal energy and hydrokinetic energy, a recycling program for critical minerals and for the government to identify potential supply disruptions to critical minerals, money to make methane hydrates commercially viable and more than half a billion dollars per year to build a “clean” coal pilot project—to name a few.

None of these activities is the legitimate function of the government. Any economically successful technology will not thrive as a result of a government program but because they have a market viable product. When the government tries to pick winners and losers, the spending distorts the market by dictating where investments flow, taking labor and capital away from potentially more promising endeavors.

Importantly, producers become dependent on that special treatment from the government. Rather than relying on the appropriate market signals and properly assigning risk to an investment, companies rely on the taxpayer and enter into the market with a skewed vision of what profitability looks like.

Title V of the bill would create a new $150-million-per-year National Park Maintenance and Revitalization Fund to attempt to address park maintenance backlogs and permanently reauthorizes the Land and Water Conservation Fund (LWCF) and the Historic Preservation Fund. Enacted in 1965, the LWCF uses offshore energy royalties to buy private land and turn it into public parks. This bill would specify that the funds collected could be used not only for land acquisition but also for hunting, fishing, and recreational purposes as well as conservation programs. The act would also permanently reauthorize the Historic Preservation Fund (HPF) at $150 million a year; the fund administers preservation grants to state, territorial, tribal, and local governments, educational institutions, and nonprofits.

Federal ownership of land in America is massive, consisting of some 635 million acres. America’s largest land holder, the Department of the Interior, has tens of billions of dollars in maintenance backlogs, resulting in terrible land mismanagement and environmental degradation. The answer is not to throw more money at the problem as the bill aims to do, but to transfer ownerships and responsibility to state and local governments and private property owners.

By devolving responsibility to those parties closest to the issue who can prioritize problems, solve them effectively, and properly weigh the needs and desires of local communities, the result will be better land use and environmental protection.

Throughout the Senate Energy Modernization Act, politicians are attempting to solve problems that aren’t problems at all. They are simply outcomes of the market and a reflection of what consumers value.

Whether it’s less investment in green energy projects or energy efficient appliances and infrastructure, it is not the role of the government to make those determinations for investors and families. Every attempt to ends up inflicting much more harm than good and distorts energy markets in ways that retards innovation.