How the Shale Revolution Became the MVP of US Energy Production 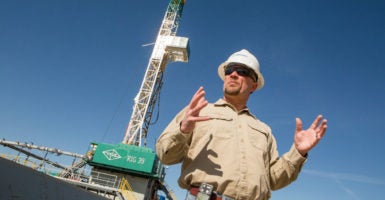 According to a 2019 report by the president’s Council of Economic Advisers, natural gas production has increased nearly eightfold since 2007, while oil production has increased nineteenfold. Pictured: Paul Ulrich, director of Jonah Energy, stands in front of an oil rig drilling for natural gas at the Jonah Field May 4, 2018, outside Pinedale, Wyoming. (Photo: Melanie Stetson Freeman/The Christian Science Monitor/Getty Images)

Coleman Raush is a graduate of the Young Leaders Program at The Heritage Foundation.

For the average American, that means lower energy bills, job growth across the country, and a healthier economy.

The Council of Economic Advisers found that increased production has saved U.S. consumers nearly $203 billion annually, which averages out to approximately $2,500 for the average family of four.

These energy cost reductions are an especially huge boost to lower-income households, who spend a large percentage of their income keeping the lights on.

According to the Council of Economic Advisers, the poorest one-fifth of U.S. households have been able to keep 6.8% of their annual income as a result of shale revolution energy savings.

Additionally, Timothy Komarek of Old Dominion University found that counties in the Marcellus shale—covering Pennsylvania, West Virginia, and Ohio—saw wages increase by 6.6% since 2007.

America’s energy revolution isn’t just about the oil and gas companies. Far from it. We all benefit because increased supplies lower prices, increase economic prosperity, and shield consumers from supply disruptions that have occurred around the world.

And the service industry is thriving, too. One barber in Texas is pulling in more than $180,000 a year by taking his mobile barbershop to remote oil fields.

Fortunately for Americans, most of the shale resources fall under private and state-owned lands, as opposed to land and mineral rights that the federal government owns and controls. Effective state management has allowed for rapid expansion while maintaining a strong environmental record.

State and local governments are more accountable than the federal government to the people, who will directly benefit from an efficient permitting process and environmental stewardship. That makes it more likely that natural resources will be developed to create jobs and grow the economy, while protecting the environment.

The Interior Department also cut the average time frame for an environmental assessment from the Bureau of Land Management down from one year to three months.

President Donald Trump touted America’s energy dominance during his State of the Union address Tuesday night, reminding the nation that the U.S. is firmly in the No. 1 position when it comes to global oil and gas production.

As Axios’ Amy Harder wrote, the 2010s were “the decade that blew up energy predictions.” Ten years ago, the U.S. Energy Information Administration projected America would produce 6 million barrels of oil per day.  To the benefit of hardworking families and businesses across the country, we’ve more than doubled it.

For the first time in nearly 70 years, America is a net energy exporter and could be in that position well into the future.

No one fully knows what the 2020s will bring, because energy markets are unpredictable.  But just like for Mahomes, the Super Bowl-winning Kansas City Chiefs’ quarterback, the future looks bright.