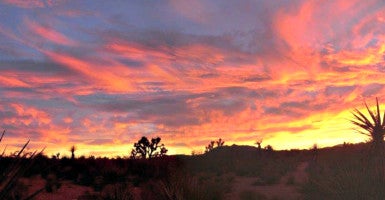 The sun sets to the southwest of Judy Bundorf's home in Searchlight, Nev. If federally backed wind turbines are built little more than a mile away, she says, the Searchlight skyline would be defaced. (Photo courtesy Judy Bundorf)

If they prevail, they will have handed a rare defeat to the U.S. Senate’s top Democrat, Harry Reid, in his hometown.

A federal District Court judge ruled against the development of an 87-turbine, 200-megawatt wind farm in tiny Searchlight, Nev., and the company behind the project joined with the U.S. Interior Department to file an appeal.

The case, which now sits before the U.S. 9th Circuit Court of Appeals, could stretch out for at least another year.

Even so, the Searchlight Wind Energy Project, as it is officially known, appears to be stalled permanently.

If the court decision in October had gone the other way, it would have provided the federal government with the legal “right of way” to press ahead with installing wind turbines that would cut across almost 19,000 acres of public lands.

“For at least the time being, the District Court ruling means that people in Searchlight can continue to enjoy the spectacular mountain views they presently have, and can avoid the dust storms that follow when large areas of the desert are stripped of vegetation,” Judy Bundorf, one of the town residents who filed suit against the project, says.

Searchlight, a former gold mining center in Clark County, is perhaps best known today as the birthplace of Reid, now Senate minority leader and one of the Democrats’ leading national advocates of green energy.

A revised plan removed turbines that would have been near Reid’s property. Judy Bundorf, here in front of a mature Joshua tree, fears that such typical flora could be bulldozed to make way for wind turbines near Searchlight, Nev. (Photo courtesy Judy Bundorf)

Searchlight is part of the southern tip of Nevada, about 58 miles south of Las Vegas.

Bundorf and others filed suit to halt the Searchlight Wind Energy Project in an effort to preserve the bucolic desert regions in and around their community.

Bundorf’s home in the town of under 600 residents is about a mile from where wind turbines as tall as 428 feet were to be located. But the court ruling is a much bigger victory, she says in an interview with The Daily Signal.

Americans across the country, Bundorf says, confront “well-connected special interests and their allies in government” such as Reid, who favor “inefficient and expensive renewable energy plans” that “degrade and burden the environment.”

Basin and Range Watch, a grassroots conservation group and co-plaintiff, carefully tracks legal developments on its blog. The group opposes development of wind and solar energy facilities in the Searchlight area.

In her ruling, Du concluded that the Bureau of Land Management and U.S. Fish and Wildlife Services, both divisions of the Interior Department, produced a flawed analysis of the likely impact of the wind turbines on wildlife such as golden eagles, desert tortoises, and bats.

Du found “analytical gaps” in the Final Environmental Impact Statement and Biological Opinion that she said the agencies must rectify.

“People can continue to enjoy the stillness of the desert and the dark night skies,” Bundorf says. “Most of the economy of the little town is dependent on the tourism industry.”

On Feb. 10, though, the Bureau of Land Management put a notice in the Federal Register that it had moved to prohibit mining claims in the area of the Searchlight wind project for the next two years.

This could be viewed as the federal government’s first step toward preparing the supplemental analysis under the National Environmental Protection Act needed to move forward with the wind project, according to sources familiar with the Bureau of Land Management.

Bundorf, 72, retired in 2007 after 23 years with Harris Consulting Engineers, a small, privately held mechanical and electrical consulting engineering firm in Las Vegas. She started out as office manager and rose to principal business development manager.

“One issue that was never addressed was the potential for people getting valley fever, or coccidioidomycosis,” Bundorf tells The Daily Signal. “This is a fungal infection that is not uncommon when the desert crust is destroyed by grading. The spores are carried by the wind, and the infection can be fatal to elderly people or people with compromised immune systems.”

Bundorf, who is married but has no children, cites the “thousands of boaters, fishermen, hikers, and campers” who visit the area, particularly those who travel in and around Cottonwood Cove on Lake Mohave, just 14 miles east of Searchlight.

The turbines were set to be erected on both sides of the road for much of the distance to the lake, she says. In addition, a large electrical substation would have to be built adjacent to the entrance to Lake Mead National Recreation Area and, along the road, an operations and maintenance building with laydown yard for storing heavy equipment.

“People come to the desert to enjoy the solitude, not to drive through a heavy industrial zone to get to their destination,” Bundorf says.

The view looking southeast across Searchlight, Nev., to Spirit Mountain. About 40 of the 87 planned wind turbines would be visible from this angle, although two to seven miles from town. (Photo courtesy Judy Bundorf)

Reid, the Searchlight native who had been a vocal supporter of the wind energy project, has gone silent on it since the October court ruling.

The proposed wind farm initially was rolled out in 2008 as a subsidiary of Duke Energy Corp., a major player in the renewable energy market. The company made campaign contributions to Reid and other political figures in both parties who support such green energy.

Until Republicans regained the Senate in the 2014 elections, Reid was majority leader for eight years and a member of the Democrats’ leadership team for years before.

Duke Energy’s original plans called for 161 wind turbines, but the company decided to cut the project to 87 turbines. This modified plan removed turbines that would have been located near Reid’s property in the western section of Searchlight.

The Daily Signal called Reid’s office several times to ask if the Senate minority continues to support installation of wind turbines in Searchlight but received no response.

Apex Clean Energy acquired the Searchlight Wind Energy Project from Duke Energy in January 2014. Although Apex actively lobbies for the green energy agenda, it is not clear how connected Reid remains to the push for wind energy in his hometown—or what kind of stake he might have in ongoing litigation.

Dahvi Wilson, director of public affairs for Apex, based in Charlottesville, Va., told The Daily Signal in an email that the company has not decided if it will move forward with the Searchlight project.

“On Searchlight, we are currently evaluating our options to determine next steps,” she wrote.

Apex, however, did file an appeal of the District Court ruling with the 9th Circuit. In March 2013, the Bureau of Land Management released a “fact sheet” highlighting benefits of the Searchlight wind project.

The Daily Signal telephoned and emailed Greg Helseth, the federal agency’s renewable energy project manager in Nevada, to ask whether the agency intended to address and rectify the flaws and “gaps” identified by the judge in its analysis. Helseth has not responded.

When he was Senate majority leader, Reid cultivated strong ties with high-ranking government officials overseeing these projects. Neil Kornze, director of the Bureau of Land Management, is a former Reid staffer.

By devoting considerable time, effort, and expense to take on the well-connected special interests behind wind energy, residents of Reid’s hometown helped to change the legal landscape, Bundorf says:

The judge’s ruling has accomplished something that more than five years of letter-writing, public protests, telephone calls, petition-signing, and attendance at public meetings could not accomplish at the county level or the normal channels to the Department of Interior, BLM, and Fish and Wildlife. It is my understanding that the judge’s ruling is a first when it comes to overturning the approval of renewable energy projects on public lands.

The new twist, the Bureau of Land Management’s two-year prohibition on mining claims in the area, suggests that federal authorities have not given up on the Searchlight Wind Energy Project.

Bundorf, who has a bachelor’s degree in business administration from the University of Nevada, Las Vegas, says she encourages Americans to view proposed wind energy projects with a skeptical eye.

She recommends resources available at WindAction.org, including an extensive library of material on the costs of  wind energy farms and their impact on communities across the country.

Wind turbines also have a very short lifespan of something like 15 to 25 years, and they require a lot of maintenance. They must also be backed up by another source like gas, coal, or nuclear energy. And because they can’t be placed near a high-density population, they require many miles of expensive high-voltage transmission lines. Just imagine the environmental impact of these transmission lines to accommodate wind farms.

The American Wind Energy Association, however, sees its preferred energy source yielding long-term benefits for the environment and the economy.

“Wind’s growth is being propelled by cost reductions of two-thirds over the last six years, which  now makes wind the lowest-cost source of new generation,” Tom Kiernan, CEO of the trade association, said during the annual winter meeting of the National Association of Regulatory Utility Commissioners at the Renaissance Hotel in Washington, D.C.

It’s one of the biggest, fastest, cheapest ways we can reduce U.S. carbon emissions and the low-cost solution for power sector reductions. Utilities and other purchasers are turning to wind energy also because it provides stably priced energy with no fuel price risk and protects consumers by creating a more diverse energy portfolio.

For now, Bundorf says, she is grateful her town’s property values won’t be “negatively affected,” and may even rise, “because Searchlight could one day be a bedroom community for Las Vegas.”