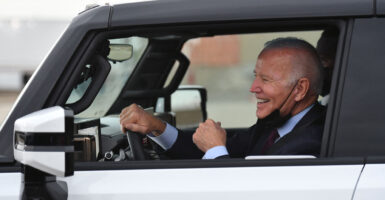 Democrats have spent decades warning that the United States must stop using the most efficient and affordable energy sources or it will be consumed by heat waves, fireballs, and cataclysmic weather events.

Every flood, every hurricane—every natural event, really—is now blamed on climate change. We have burdened our children with an irrational dread over their future. Then again, many in The Cult of Malthus won’t even have children.

So, why, if we’re on the precipice of this apocalypse, if saving the planet trumps every other concern, is President Joe Biden begging everyone to drill? On the days Democrats aren’t blaming Russian President Vladimir Putin for rising gas prices (a cost the president not long ago argued was worth paying for “freedom”), they’re blaming oil companies for profiteering.

As the national average hit $5.01 last Wednesday (nearly $2 higher than a year earlier), Biden sent letters to refining companies threatening to once again abuse his executive powers if they do not immediately alleviate high prices—a political appeal to the imaginary “greedflation.”

Biden, who promised a 100% “clean-energy economy” with “net-zero emissions” in a couple of decades, now demands energy companies, already at utilization rates above 90%, invest tens of billions more in new drilling infrastructure, when everyone knows that tomorrow, when prices recede, Democrats are going to go right back to passing laws and regulations that undercut their business.

Today, Democrats demand CEOs spend more; tomorrow, they will promise to “hold oil executives accountable” and drag them in front of congressional committees where they will be scolded by economically illiterate windbags.

That future is baked into today’s price. Because Democrats’ energy policy is a schizophrenic mess, oscillating from puerile to pernicious. You can’t spend decades working to undercut production and campaign on the promise of destroying an industry and then demand it turn on a dime when it’s politically convenient.

Democrats will argue that this is a unique emergency as prices have spiked to historic highs. Guess what? Energy prices will always be at historic highs when you create shortages, which is exactly what progressives have been advocating we do for years.

Virtually every left-wing energy proposal in the past two decades, if not longer, has been designed to create false scarcity, either through fabricated marketplaces and stringent regulations or by putting caps on production. This is what they wanted.

“No more drilling on federal lands,” Biden promised during the 2020 presidential campaign. “No more drilling, including offshore. No ability for the oil industry to continue to drill, period, ends, No. 1.”

Blue states across the country have either banned fracking or are in the process of banning fracking projects.

And, on the first day of his presidency, Biden rejoined the Paris Agreement—an accord he is now working hard to break—revoking permits for Keystone XL, a 1,700-mile pipeline that was going to carry approximately 800,000 barrels of oil a day into the United States (also baked into the price).

Biden signed a slew of executive orders prioritizing climate change over energy production, halting oil and natural gas leases on all public lands. When a court blocked him, the Biden administration appealed the decision, even as indications of an energy spike were clear.

Rather than threatening price controls, the president should just rescind all his executive orders.

Of course, until some new technology is devised, implementing any policy that resembles the Green New Deal—the plan Biden says is the “framework” for his own efforts on “environmental justice”—would hold approximately the same economic consequences as having coronavirus economic shutdowns for 30 years straight. That’s merely if we followed the Intergovernmental Panel on Climate Change recommendations on carbon emissions.

Last year, with inflation already looming, Biden preached that it was a “moral imperative” to cut greenhouse gas emissions by 50% from 2005 levels by 2030 and 100% by 2050. That’s a policy that will have us fondly reminiscing about $5 a gallon.

Energy policy can’t be capriciously implemented and then abandoned every time the Democrats’ poll numbers flail. This is just a little taste of the Green New Deal. There is no sentient being that could accept the notion that Democrats are the party that is in favor of abundant fossil fuels.

Hopefully, the price—even in small measure—for Democrats’ green policies is so politically severe that they will moderate. Because we all have unattainable dreams.