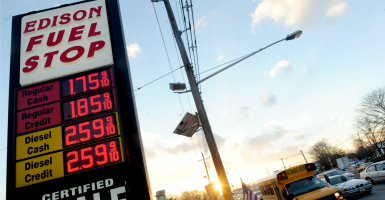 Yet again, the push is on to lift the 40-year-old ban on exporting crude oil. Yet again, opponents claim this would be a disaster … that prices would climb, availability would be threatened and the strategic advantages of holding onto our oil would be discarded.

But what Americans need to understand is that lifting the ban probably would reduce prices at the pump, that American refineries—set up for the heavier crudes we import from Venezuela, Mexico, Canada and the Middle East—are ill-suited to process the lighter, sweeter crudes produced by America’s fracking and horizontal drilling explosion, and that government retains its dismal record for picking economic winners and losers.

Moreover, the legislation recently reintroduced by Rep. Joe Barton, R-Texas, to effectively eliminate export restrictions on crude oil not only would ease logistical problems within the oil and refining industries, it would reduce the U.S. trade deficit, create jobs, increase wages and encourage investment, all of which are good for the economy.

Fracking and horizontal drilling have enabled the U.S. to increase its domestic production of liquid fuels to 9 million barrels per day, up 4 million barrels per day since 2006, and enough to lead the world in fuel production. But refining capabilities have not kept up with the rising production of domestic crude that is different than the type of oil refiners in the U.S. typically manage.

Domestic oil is lighter and sweeter than the heavier oil typically imported. Sweet crude includes more sulfur than sour crudes and thus costs more to produce and lowers the value of end products of the oil. But lighter crudes—light v. heavy is determined by the “American Petroleum Institute (API) Gravity” rating, which compares the weight of the oil to the weight of water—are more valuable because they are easier to produce and less costly to process.

According to a Government Accountability Office study, Americans could save up to 8 cents per gallon if crude were exported.

Light sweet crudes produce a range of higher value-added products with simple distillation and are generally more expensive than heavy crude. Before the shale boom, refiners in the U.S. invested tens of billions of dollars to handle the heavier crudes from Mexico, Venezuela and the Middle East. Domestic refiners that can process light crude have reduced their imports substantially, and a number of companies have made investments to handle more light crude. But it is not nearly enough to handle the excess of light sweet crude coming out of the ground.

The lack of efficiency for American refineries to handle light sweet crude in addition to burdensome restrictions on exports forces oil companies to offer their crude at a discount or reduce production. The discounted crude as a result of the ban concentrates benefits to refineries when they buy crude at depressed prices, refine it then sell the finished products on the global market at higher prices.

This is why lifting the ban on crude exports would reduce, rather than increase, prices. Refined products produced in the U.S., such as gasoline and diesel fuel, are available to the global market, but crude oil is not, so the glut of crude oil is not now holding down prices. If that crude were available on the world market, prices would fall, which would mean lower gas prices for Americans. According to a Government Accountability Office study, Americans could save up to 8 cents per gallon if crude were exported.

This is not your father’s energy economy. The landscape of the 1970s, or even the 2000s when Americans were importing two-thirds of their energy, simply does not exist anymore. The benefits of the innovation brought to us by a free market approach to energy exploration should not be allowed to go to waste because of outdated rules.

Marshal Wilson is a member of the Young Leaders Program at The Heritage Foundation.