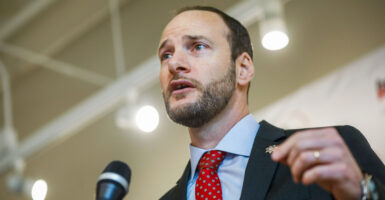 San Francisco District Attorney Chesa Boudin—seen here Dec. 20—is out of the job after fed-up voters in the City by the Bay supported his recall Tuesday. (Photo: Gabrielle Lurie/San Francisco Chronicle/Getty Images)

Chesa Boudin, the rogue prosecutor of San Francisco, was recalled from office Tuesday by voters who were disgusted by his feckless leadership and pro-criminal, anti-victim policies.

The recall was organized and funded primarily by liberal Democrats who were fed up with Boudin and his hands-off approach to enforcing the law.

Boudin’s recall is significant not just for the voters in the City by the Bay, but nationally, as it is the clearest signal yet that the rogue prosecutor movement, as we have been saying, is a colossal failure.

We warned readers about Boudin last August, specifically how his policies of not prosecuting thefts, burglaries, shoplifting, drug cases, and other crimes have turned the city into a nightmare for businesses and residents alike.

Voters in San Francisco, quite honestly, should have known better when they voted for Boudin. His parents are Kathy Boudin and David Gilbert, both of whom were members of the Weather Underground, a radical, militant Marxist organization. The duo drove the getaway car following an armed robbery of a Brinks truck in New York, in which a Brinks guard and two police officers were fatally shot.

Before attending Yale Law School, he lived in Venezuela and served as a translator to the dictator, then-President Hugo Chavez. After clerking for two federal judges, he began his career in the San Francisco Public Defender’s Office, where he argued that California’s bail system was unconstitutional.

It wasn’t and isn’t. But that didn’t matter.

The entire so-called progressive prosecutor movement is built on two premises: (1) that the entire criminal justice system is systemically racist and (2) that to fix the system, you have to reverse-engineer and dismantle the criminal justice infrastructure.

The first premise is simply not true, and voters are finally starting to wake up to the fact that law and order matters. The second premise, in practice, has meant funding candidates for district attorney and requiring them, once elected, to act like public defenders and to ignore victims.

What Boudin and other rogue prosecutors didn’t count on was liberal, inner-city residents and voters rising up and demanding that their district attorneys actually prosecute criminals. They gambled on the idea that liberal voters would tolerate crime, robbery, thefts, open-air drug markets, rising gang violence, and more homicides, as long as these policies were sold as “reimagining prosecution” and a way to combat “mass incarceration.”

They also assumed that inner-city residents and voters are stupid. They assumed that voters didn’t remember that crime rates, especially rates of violent crime, had been falling dramatically for 25 years, until Boudin, George Gascon (Los Angeles), Larry Krasner (Philadelphia), Kim Foxx (Chicago), and Kimberly Gardner (St. Louis), and others of their ilk came along a few years ago.

They assumed that voters wouldn’t figure out that those crime rates fell, at least in part, because of creative programs like drug courts, domestic violence courts, teen and peer courts, family justice centers, and thousands and thousands of alternatives to incarceration—genuinely progressive programs that had been implemented by traditional law-and-order prosecutors who were in favor of limiting access to those programs to truly deserving offenders, while prosecuting the rest for the crimes they had committed.

These rogue prosecutors—and the entire movement created, funded, and inspired by Soros—assumed that if you just repeated “racism, racism, racism” enough times, blamed guns, talked about the “carceral state,” and bloviated about “reimagining” this and that, woke inner-city Democratic voters would elect their candidates.

They further assumed that because the mainstream media—such as The Washington Post, The New York Times, the San Francisco Chronicle, the Chicago Tribune, and various other papers—refuse to fairly cover crime stories, the denizens of those cities, who read those papers daily, would simply go along to get along.

It appeared to work for a while, but they were wrong. As we featured in our two rogue prosecutor symposiums, it turns out that people, especially in the inner city, want public safety. They want safe streets. They want criminals to be held accountable. They want people with drug problems to be arrested and to get help. They want their kids to be able to walk safely to and from school, free from gang members. They want to be able to shop at a Walgreens or Target or CVS and to be safe when they are there.

They want prosecutors to prosecute cases, and defense attorneys to defend. They want justice.

Just as importantly, these community members are starting to realize that crime is the fault of criminals. And they are realizing that if their elected DAs won’t prosecute criminals, then the crime will continue to rise, especially when the police have no incentive to arrest criminals because the DAs won’t prosecute them.

The bloom is off the rogue prosecutor rose. Voters in San Francisco have said enough is enough. Voters in Los Angeles are close to gathering the requisite number of signatures by early July to send their rogue prosecutor, Gascon, to a recall election this fall.

Gascon’s policies, which we wrote about previously, are even worse, and more dangerous, than Boudin’s.

Jonathan Hatami, Los Angeles County deputy district attorney, and an outspoken critic of Gascon—his boss—told us: “Democrats, Republicans, and independents came together in San Francisco and chose public safety over politics and [over] rogue and radical criminal justice policies. The reign of Chesa Boudin is over.”

He was hopeful that the same fate will befall his boss, saying, “We will do the same here in Los Angeles and recall George Gascon if we all work together … . We can have reasonable criminal justice reforms without sacrificing public safety.”

Baltimore City State’s Attorney Marilyn Mosby, under federal indictment, is on thin ice with city residents because of her lenient policies, as is Foxx in Chicago. The district attorney for the city of St. Louis, Gardner—another Soros DA—is under an ethical cloud, and may lose her law license while presiding over a crime-infested city.

San Francisco Mayor London Breed will appoint Boudin’s successor, who will serve until the election in November. Since Breed has taken a firm stand (at least in words) on enforcing the law, and has been critical of Boudin’s policies, let’s hope she appoints someone who enforces the law and gives the voters what they want; namely, a DA who actually prosecutes criminals.