Rogue US Attorneys Coming to a City Near You? 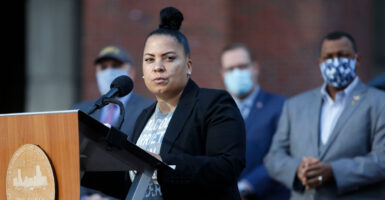 Rogue prosecutor Rachael Rollins claims the Biden transition team is considering her for the position of U.S. attorney for the District of Massachusetts. Pictured: Rollins speaks during a press conference to discuss the outcome of the presidential election in Boston on Nov. 8. (Photo: Jessica Rinaldi/The Boston Globe/Getty Images)

This commentary is part of a series on the rogue prosecutors around the country who have been backed by liberal billionaires such as George Soros and Cari Tuna, and the threat those prosecutors pose to crime victims and others alike. Previous entries in the series focused on prosecutors in Baltimore, Philadelphia, Chicago, Boston, and Fairfax County, Virginia.

Rachael Rollins, the rogue prosecutor in Boston, may want to be the United States attorney for the District of Massachusetts. According to news reports, Rollins says people working on the Biden transition team have approached her about the position.

It is irrelevant whether she is just playing the “look at me, I’m important” political game or is serious about wanting the job. She could be the nation’s first rogue U.S. attorney. The more disturbing thought is the possibility that we might end up with several rogue U.S. attorneys in key areas around the country.

If you thought things were bad in cities with elected rogue prosecutors—and they are—just imagine how crime rates will explode across the country if a President Joe Biden nominates, and the Senate confirms, rogue U.S. attorneys.

As much damage as these state-level rogue prosecutors can do, at least there’s been a federal backstop, with U.S. attorney’s offices in places like Chicago, New York, and Philadelphia willing to step in and prosecute the most dangerous, most violent felons when the rogue prosecutors like Kim Foxx, Marilyn Mosby, Larry Krasner, Steve Descano, and yes, Rachael Rollins, refuse to do their jobs. On their watches, crime rates have exploded, victims are ignored, and public safety doesn’t exist.

As we highlighted in our work on the rogue prosecutor movement, there are over 2,300 felony prosecutor offices spread across the 50 states. The vast majority of criminal prosecutions are handled by these offices, as are almost all misdemeanors.

Most local elected prosecutors are traditional, independent law-and-order prosecutors. Their policies and programs—like drug courts, domestic violence courts, mental health courts, family justice centers, diversionary programs, and alternatives to incarceration—have resulted in the lowest crime and incarceration rates in 20 years. They are the real “progressive” prosecutors, if by “progressive” you mean “willing to try new methods to achieve better results.”

On the federal side of the house, though, there are 94 presidentially-appointed, Senate-confirmed U.S. attorneys. They are charged with enforcing federal law, and they work closely with local officials, including local police and elected district attorneys.

Not surprisingly, in cities with elected rogue prosecutors, especially those cities mentioned above, that working relationship has suffered because rogue prosecutors often appear disinterested in enforcing the law, and they recoil at working with those who are.

Take, for instance, Philadelphia, where career civil rights and criminal defense attorney-turned-rogue prosecutor Larry Krasner reigns. Crimes rates have soared, including the murder rate. This is a direct result of Krasner’s pro-criminal, anti-law enforcement polies, according to the current U.S. attorney in Philadelphia, William McSwain.

McSwain, a former Army Special Forces officer, doesn’t suffer fools lightly, and has rightfully excoriated Krasner for his dangerous policies that have led to scores of murders in the so-called City of Brotherly Love. Unfortunately, one of those murdered was a Philadelphia police officer, cut down by a thug Krasner treated with kid gloves.

No doubt Kamala Harris as vice president would have a big say in who gets to be the U.S. attorney in any of our nation’s 94 districts. Not only is she a former elected San Francisco district attorney and California attorney general, she has expressed sympathy for these rogue prosecutors, and her billionaire backers—who also support the rogue prosecutor movement—will expect her to deliver.

Many are former criminal defense attorneys, which, by itself, is certainly not a disqualifying attribute. The problem is that once former criminal defense attorneys become the elected district attorney, or the appointed U.S. attorney, they have a different job and a different client. They have a duty to do justice, which includes a responsibility to enforce the law, to ensure safety, to protect victims of crime, and to go after bad guys.

The Larry Krasners of the world don’t do that. Although they occupy the office of the district attorney, their sympathies still lie with criminal defendants at the expense of public safety and the victims of crime.

At least now there’s a chance that the U.S. attorney in an area covered by a rogue district attorney will bring federal charges against these dangerous individuals if it’s appropriate. That won’t happen if the U.S. attorneys go rogue, too.

U.S. senators, who are required to give their “advice and consent” to anyone nominated to be a U.S. attorney, should be skeptical of nominees who are currently elected rogue prosecutors, or who have the backing of Soros, his allies, or any of his political action committees.

Rogue prosecutors tend to copycat each other, and they share four similar traits.

First, they usurp the constitutional role of the legislature by refusing to prosecute entire categories of crimes.

Second, they abuse the role of the county prosecutor by refusing to faithfully enforce the law.

Third, they contribute to increases in violent crime in their cities through their reckless policies.

And fourth, they ignore victims, in addition to a decline in public safety overall.

As a group, they see the police as the enemy, and criminal defendants as victims. In practice, their policies harm the very people they pretend to care about the most: low-income and minority individuals.

So it is not hard to imagine what will happen if the Biden-Harris administration nominates, and the U.S. Senate confirms, rogue U.S. attorneys.

Since the movement is the brainchild of Soros, who was also at the forefront of the marijuana legalization movement and supports broad de-criminalization of most drugs, expect to see a dramatic decrease in the number of federal drug prosecutions.

It’s also not hard to imagine a rogue U.S. attorney refusing to prosecute entire categories of crimes, ignoring real victims, treating the police as the enemy, and allowing crime rates to tick up across the country as a result.

Perhaps the Rachael Rollins and Larry Krasners of the world don’t want the U.S. attorney jobs but rather just want to have a significant say in who gets those jobs in their districts.

Either way, it’s a disaster in the making.

Rollins is proud of her so-called policy memo, outlining the 15 crimes you can now commit in Boston with impunity. We don’t need that to go nationwide, and we don’t need it at the federal level.