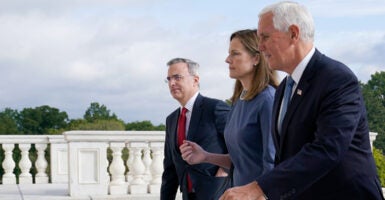 Vice President Mike Pence arrives Sept. 29 at the Capitol with Judge Amy Coney Barrett to meet with senators about her nomination to the Supreme Court. With them is White House counsel Pat Cipollone. (Photo: Susan Walsh/Pool/Getty Images)

SELMA, N.C.—Vice President Mike Pence predicted Friday that the Senate will confirm Judge Amy Coney Barrett for the Supreme Court, calling on Democrats to help give her a “respectable” margin.

Pence also warned that if Democrats succeed in adding justices to the high court, it would be “the biggest power grab in American history.”

“We’re going to fill that seat, I promise you,” Pence told a crowd approaching 400, referring to Barrett’s pending Senate confirmation. “Get ready.”

The vice president’s audience at The Farm at 95, an outdoor venue, let out a loud cheer for Barrett, a judge on the Chicago-based U.S. Court of Appeals for the 7th Circuit since November 2017.

“I’m partial to Amy Coney Barrett,” Pence quipped, noting that the judge and University of Notre Dame law professor is from Indiana.

Pence represented Indiana in the House of Representatives and was the state’s governor when Donald Trump tapped him as his running mate in 2016.

Barrett, 48, was questioned during two of four days of confirmation hearings this week before the Senate Judiciary Committee, which is expected to vote to confirm her late next week.

Her nomination then will go to the full Senate for a vote. Republicans hold 53 seats and need a simple majority of 51 votes to confirm Barrett.

Trump, who nominated Barrett in 2017 for the 7th Circuit seat, announced Sept. 26 that she was his choice to fill the Supreme Court seat of the late Justice Ruth Bader Ginsburg, who died Sept. 18 at age 87.

Pence reminded his audience that during a Judiciary Committee hearing on Barrett’s nomination to the 7th Circuit, Sen. Dianne Feinstein, D-Calif., told her that “the dogma lives loudly within you.”

“Hollywood started the same thing, attacking her faith,” Pence said, adding: “Well, I’ve got news for Hollywood and Democrats: The dogma lives loudly in me too, and in all of those who live by their faith.”

This prompted strong cheers from the audience.

The vice president also criticized congressional Democrats who, in response to Barrett’s likely confirmation, are talking about “packing” the Supreme Court by adding more justices than the current nine, the total since 1869.

“Adding justices to the court … would be the biggest power grab in American history,” Pence said.

In remarks that lasted nearly an hour, Pence also spoke against the left’s efforts to defund or “reimagine” police departments.

“The president stands with the men and women on the thin blue line,” the vice president said, criticizing those who say law enforcement agencies are implicitly biased against racial minorities.

“You don’t have to choose between supporting law enforcement and supporting African American families,” Pence said.

He went on to tout the Trump administration for achieving record low unemployment for blacks and Hispanics, making unprecedented investments in historically black colleges and universities, and fostering opportunity zones and school choice.

A giant American flag behind him, the vice president spoke on a stage decorated with bales of hay and bookended by Case IH Magnum 250 tractors, two of the red vehicles parked on one side and one on the other.

Noting that Fort Bragg is less than 60 miles away, Pence said the Trump administration rebuilt the military and gave troops their largest pay increase in 10 years.

“Last year, American special forces captured the last inch of the ISIS caliphate [and] took down their leaders without an American casualty,” he said.