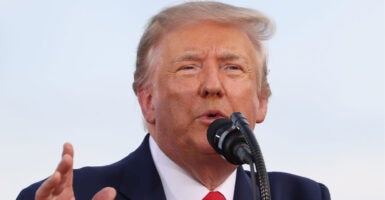 President Trump’s defense of the Second Amendment and support for law enforcement rhetorically and financially have already benefited black America—both those who serve in blue and those whose neighborhoods have improved. (Photo: Tasos Katopodis/Getty Images)

In the wake of George Floyd’s death, America has been presented with a false narrative about blacks and law enforcement.

Elite progressive voices have pushed a radical idea: Law enforcement is the embodiment of bigotry in America and that “defunding” or even banning the police department is the solution that blacks want most.

But nothing could be further from the truth, as I explain in Chapter 4, “Stop or I’ll Shoot,” of “How Trump is Making Black America Great Again.”

It turns out that black Americans are as interested in law and order as the rest of the country, if not more so.

For instance, it was only last month that Rasmussen released a poll showing that blacks are the most fearful of their communities becoming less safe if police are not around.

A staggering 67% of blacks say that the growing criticism of America’s police will lead to a shortage of police officers and reduce public safety in the community where they live. That’s a 3 percentage points higher fear level than the response of Americans overall.

The fact is that black communities suffer far more from under-policing violent crime than from over-policing.

In a city like Chicago, the astronomical homicide rate has nothing to do with peace-officer shootings and is instead due to intentional underfunding of law enforcement. This strangulation of the Chicago Police Department results in elevated emergency response times and a mounting list of unsolved homicides. This is a concern across the nation.

Blacks know this, and that’s one reason why, contrary to media perceptions, black men disproportionately serve in law enforcement. While black men are only 6.2% of the population, they make up more than 11% of all law enforcement officers nationwide.

Here’s the truth: Time-tested traditional law enforcement solutions work, and that’s the reason that over the past three years, the Trump administration has pushed new grants for violent crime investigation, as well as higher funds to improve the skills of law enforcement personnel.

Consequently, neighborhoods have become safer in Memphis, Tennessee; Tulsa, Oklahoma; Indianapolis; and even Detroit, thanks to these grants and due to greater coordination between local police and the feds. But one city stands out: Chicago.

Liberal leaders like Chicago Mayor Lori Lightfoot tend to express the issue of crime and policing in black neighborhoods in starkly Marxist terms; i.e., that economic disparities and “systemic racism” are the primary cause of crime in black communities.

Notably, Lightfoot oversees one of the least business-friendly cities in the country.

Worse than the negative business climate, more Americans have been killed in Chicago than in the combat zones of Afghanistan and Iraq combined since Sept. 11, 2001.

This is why Trump appealed directly to Lightfoot and Illinois Gov. J.B. Pritzker two weeks ago, offering to bring needed resources and federal support to stop Chicago’s crime wave.

Black residents in Chicago are still waiting for the mayor to accept his offer.

Also, blacks know something that most woke elites don’t. Private citizens have no constitutional right to police protection.

When you can’t sue the government for malfeasance when it fails to protect you from a violent crime, it is only logical that you’ll want greater funding for the police department and, notably, the ability to get a firearm to protect yourself.

A 1989 D.C. Circuit Court decision involving the families of victims of brutal homicides has been replicated in courts all across the country. The government is “under no general duty to provide public services, such as police protection, to any individual citizen.”

In other words, if the police don’t show up, you’re on your own. Less funding for the police makes this situation worse, not better.

The Right to Bear Arms Is Critically Important to African Americans

On the latter front, blacks are seeking out lawful gun ownership in record numbers. In fact, the National African American Gun Association, an organization that barely had four chapters in 2016, has exploded its membership to over 110 chapters all across the country today.

The Second Amendment provides a vital way for blacks and whites to maintain autonomy and freedom. And this right—frequently praised and supported by Trump—is increasingly the first (and sometimes only) line of defense for black families against the epidemic of violence in their own neighborhoods committed overwhelming by people who look like them.

Black Americans want what all other citizens want—safer communities and more police. Trump’s defense of the Second Amendment and support for law enforcement rhetorically and financially have already benefited black America—both those who serve in blue and those whose neighborhoods have improved.

Gun ownership over the past three years has skyrocketed as more black Americans recognize the importance of supplementing law enforcement, not enabling crime.