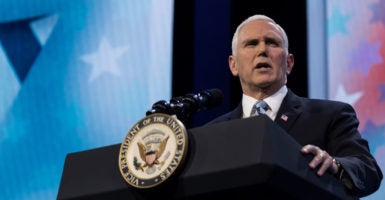 “North Korea’s desire to meet to discuss denuclearization—while suspending all ballistic missile and nuclear testing—is evidence that President Trump’s strategy to isolate the Kim regime is working,” Pence said in an official statement.

“President Trump greatly appreciates the nice words of the South Korean delegation and President Moon [Jae-in],” White House press secretary Sarah Huckabee Sanders responded in an official statement. “He will accept the invitation to meet with Kim Jong Un at a place and time to be determined. We look forward to the denuclearization of North Korea. In the meantime, all sanctions and maximum pressure must remain.”

Pence emphasized that “the North Koreans are coming to the table despite the United States making zero concessions,” as past U.S. presidents have done to appease the Kim regime. Instead of concessions, the U.S. has continued to ratchet up the pressure on North Korea, urging it to pursue a path of peace instead of destruction.

The elevation of Kim’s status to a nuclear-armed equal could be considered a type of concession. However, the U.S. is committed to maintaining its maximum pressure campaign until North Korea denuclearizes.

“Our resolve is undeterred and our police remains the same,” Pence explained, adding, “All sanctions remain in place and the maximum pressure campaign will continue until North Korea takes concrete, permanent, and verifiable steps to end their nuclear program.”