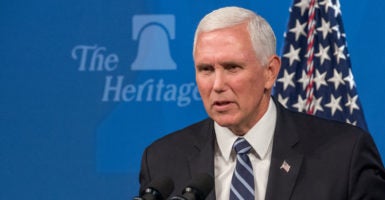 Pence’s speech will be part of the leading conservative think tank’s annual President’s Club Meeting, which runs Oct. 21-23 at the Marriott Marquis in Washington, D.C. The event is Heritage’s largest annual gathering of supporters, drawing hundreds of attendees each year.

“We are delighted to have the vice president at The Heritage Foundation President’s Club Meeting and gala next month,” said Heritage President Kay Coles James. “There’s an instinctual trust that conservatives have with Vice President Pence that’s been built through nearly two decades of working together.”

Pence’s speech will be his second to a Heritage audience in just about a month. Last week, he visited Heritage for a Constitution Day address, focusing on America’s military, free trade, foreign policy, and the federal judiciary.

“You know, The Heritage Foundation is a flagship of freedom,” Pence told a standing-room-only crowd. “Since its founding in 1973, Heritage has been advancing conservative public policy based on the principles of free enterprise, limited government, traditional values, and, from its very founding, focused on a strong national defense. And now for nearly half a century, it’s undeniable The Heritage Foundation has made a difference for America.”

At this year’s President’s Club Meeting, the think tank will introduce a new black-tie gala dinner called Heritage Honors. The event will include presentation of Heritage’s highest honor, the Clare Boothe Luce Award, and feature an announcement about a major new initiative to expand the reach of the conservative movement.

This year, Heritage is celebrating the 40th anniversary of President’s Club. It includes the think tank’s top supporters, many of whom travel to Washington each fall for the annual meeting.

Attendance at this event is by invitation only. To learn more about how to register to attend, call 1-800-546-2843 or email Shawn.Bhatia@heritage.org.