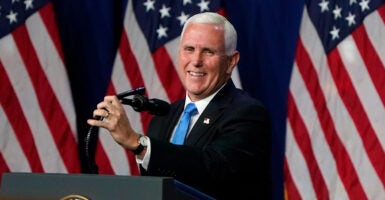 The so-called mainstream media, including CNN, is apoplectic over former Vice President Mike Pence’s recent commentary in The Daily Signal, in which he says that “election integrity is a national imperative.”

Apparently, many media outlets disagree, and don’t like that he points out the serious problems with HR 1, which just passed the House of Representatives, that would “trample the First Amendment” and “increase opportunities for fraud.”

Pence is absolutely correct in that assessment. CNN published its supposed refutation by claiming that he got his facts wrong about what the legislation designated HR 1 does. But the CNN fact-checkers are the ones who are wrong—and some of their claims border on the absurd.

For example, the fact-checkers assert that Pence is wrong when he said that HR 1 bans voter ID laws. But the bill requires states to allow individuals to vote who sign statements in which they claim they are who they say they are.

This federal requirement eviscerates state voter ID laws and, in essence, bans them; states obviously can’t enforce their voter ID requirements if federal law says they have to allow anyone who just signs a form to vote.

CNN’s characterization of the vice president’s claim as “not true” is disingenuous and should earn them a Pinocchio award.

Next, CNN claims that Pence is wrong over his concern that imposing automatic voter registration requirements on the states will lead to noncitizens, i.e., illegal aliens (although CNN follows the politically correct rule of referring to them as “undocumented immigrants”) being registered to vote. But there seems little doubt that will happen, and already has happened in places like California that have implemented automatic voter registration.

The complex sections of HR 1 on automatic voter registration require numerous state and federal agencies to send information on individuals to state election officials so they can be registered.

Many state and federal agencies don’t have citizenship data on the individuals they deal with. In fact, most “public secondary schools” and “institution[s] of higher learning” that are included in this automatic voter registration requirement studiously avoid getting citizenship information on their students, especially illegal aliens.

So it is highly likely that these schools will send information on all of the individuals they deal with, regardless of their citizenship status, to state election officials. Moreover, HR 1 specifically states that no alien can be “prosecuted under any federal or tsate law” or “adversely affected in any civil adjudication concerning immigration status or naturalization” due to being automatically registered.

CNN does acknowledge that Pence is correct about felons voting. While admitting that the legislation would require states to allow what CNN terms “formerly incarcerated persons” to vote “the moment they set foot out of prison,” as the former vice president said, CNN fails to add that this particular provision is blatantly unconstitutional.

The 14th Amendment specifically gives states the right to decide if felons lose their ability to vote and if and when they can get it back. You can’t override a constitutional amendment with a bill passed by Congress.

CNN says that the accuracy of Pence’s assertion that HR 1 “would force states to adopt universal mail-in-ballots” depends on how you “define” that term.

CNN’s “fact-check” on redistricting is also amusing in what it reveals about the network’s view of government. Pence said in his commentary that “congressional districts would be redrawn by unelected, unaccountable bureaucrats.”

CNN is forced to admit that HR 1 does take the power to redraw political boundaries away from state legislatures and forces states to set up so-called “independent” redistricting commissions. But CNN claims that what “constitutes” an unaccountable bureaucrat is “up for debate.”

Really? State legislators who redraw political boundaries after each census are accountable to the voters who put them in office—and voters can try to vote them out of office if they don’t like how those legislators conduct themselves, including the way they do redistricting.

But the members of the commissions required by the legislation all would be appointed. That means they would be unaccountable to voters who would have no recourse against commissioners whom they view as having drawn unfair, overly partisan, or inequitable political lines in the redistricting process.

That sounds like “unaccountable bureaucrats” to me—and any member of the public with common sense.

Finally, CNN admits that Pence was correct when he said that the bill requires that illegal aliens and citizens be given equal representation in Congress. But it tries to excuse that by saying “this is already the case,” and that President Joe Biden has ordered that the population used for reapportionment include aliens, legal and illegal.

This “equal representation” may be true relative to apportionment, but Pence’s comment had nothing to do with apportionment.

What CNN fails to explain is that Pence is talking about redistricting, and it is not currently a requirement under federal law for state legislatures to draw new congressional district lines using total population data that includes aliens. Each state sets its own criteria.

In fact, in the interest of fundamental fairness and equal protection principles, states legislatures should all switch to using citizen population rather than total population when drawing new congressional districts lines. If HR 1 becomes law, they won’t have that option.

Contrary to CNN’s biased, partisan review, Pence assessed the legislation accurately and succinctly. As he said, it “mandates the most questionable and abuse-prone election rules nationwide” and would “prevent states from implementing new, needed reforms.”

Pence added that we should be working to “restore public confidence in our elections.” He is absolutely right. If it becomes law, HR 1 will do the exact opposite of that.