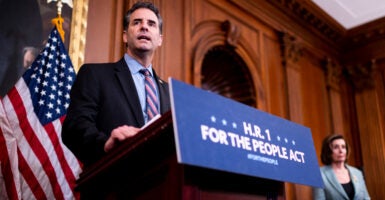 In a letter to congressional leaders, nine former members of the Federal Election Commission warn that a Democrat-backed bill to overhaul elections, now before Congress, is a “threat to bipartisanship” at the agency.

The former FEC members’ four-page letter cautions the Democratic and Republican leaders about provisions of HR 1, dubbed the For the People Act, and its companion bill in the Senate, S 1.

The proposed changes, among many other provisions, include requiring states to allow any eligible voter to vote by mail in federal elections and requiring states with voter identification laws to allow those without an ID to vote if they complete a sworn, written statement confirming their identity.

But in their letter, the nine former commissioners limit their criticism to Titles IV and VI in Division B of the bill, which “concern the jurisdiction of the FEC,” on which they served a combined total of more than 60 years between 1985 and 2020.

“Title VI would transform the FEC from a bipartisan, six-member body to a five-member body subject to, and indeed designed for, partisan control. Proponents claim this radical change is necessary to prevent ‘deadlock’ on the commission and assure efficient operations,” they say in the Feb. 9 letter. “This perception of perpetual deadlock is incorrect.”

The letter argues that the Federal Election Commission’s current makeup—with an equal number of members of each major party and a voting structure requiring some “bipartisan agreement before an enforcement action went forward or a rule was adopted”—is “indispensable” for bipartisan support and to ensure the commission isn’t perceived as a partisan tool of the majority party.

The former commissioners note that “even the most extreme study of FEC votes … found a maximum of 30% of votes ending in 3-3 ties,” adding that other studies “consistently found much lower rates of ‘deadlock,’ typically in the [1% to 6%] range.”

An analysis by the nonpartisan, nonprofit Institute for Free Speech found that in 2014, the FEC achieved bipartisan agreement—6-0, 5-1, or 4-2 decisions—on 93% of all votes.

“On substantive matters, bipartisan agreement was reached on 86% of votes,” said the institute, which was founded by Bradley Smith, one of the letter writers, after he left the FEC in 2005. “[O]nly 14% of substantive votes resulted in 3-3 splits.”

The few examples of “deadlock” were due to differences of opinion over campaign finance laws, the nine ex-commissioners, all Republican appointees, say in their letter to Pelosi and the other congressional leaders.

Also among the nine signatories to the letter is Hans von Spakovsky, a senior legal fellow at The Heritage Foundation who manages the think tank’s Election Law Reform Initiative.

Most importantly, we believe that Title VI, by shifting the commission from a bipartisan, six-member body to a five-member body subject to partisan control, would be highly detrimental to the agency’s credibility. It would lead to more partisanship in enforcement and in regulatory matters, shattering public confidence in the decisions of the FEC. …

If Congress wanted to destroy confidence in the fairness of American elections, it is hard to imagine a better first step than to eviscerate the FEC’s bipartisan structure.

The bill’s Title VI also would allow the FEC chairman, who is appointed by the president on a partisan basis, to hire and fire the commission’s general counsel with the support of just two other commissioners.

That change would enable that important enforcement position to be filled without bipartisan support, the letter writers say.

“Both the appearance and reality of bipartisanship in enforcement is fundamental to the FEC’s success,” the letter says, “and Title VI destroys both.”