Why Election Integrity Is So Important to Me 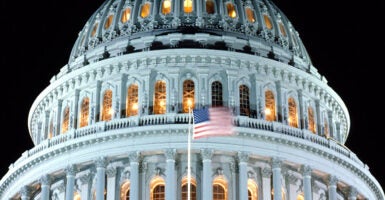 Having escaped oppression under European dictatorships in the middle of the last century, Hans von Spakovsky’s parents witnessed firsthand the truth articulated by President Ronald Reagan: “Freedom is a fragile thing and is never more than one generation away from extinction.” That is why he is deeply committed to safeguarding the integrity of U.S. elections. (Photo: VFKA/Getty Images)

I had a phone call recently from an old friend who follows the work I do on safeguarding the integrity of our elections. He asked me how I could stand the venomous atmosphere of the political world in Washington, or vicious, unfair, and seemingly constant attacks by a biased, partisan media.

After all, the media seems intent on going after anyone who brings to light the problems with our current election process. Just mentioning the fact that the U.S. has a long history of election fraud—as the U.S. Supreme Court itself acknowledged in 2008—apparently makes you public enemy No. 1.

As I told my friend, I don’t much like it. But I can’t do anything other than continue trying to preserve and protect the democratic process that makes the U.S. the greatest republic the world has ever known.

What always put this malevolent behavior of my detractors into perspective for me is the knowledge that my family has experienced much worse.

If my parents could survive the harrowing experiences they had growing up in war-torn Europe in the middle of the 20th century, then I can simply brush off the attacks of ill-informed critics who attack anyone who disagrees with their point of view, and keep working on an issue that I strongly believe in.

I am a first-generation American. My parents met in a refugee camp in the American-occupied sector of Germany in 1946. My mother grew up in Nazi Germany. She was only 10 years old when World War II started in 1939, but she had already seen the brutality of the Nazis and the transition of the Weimar Republic into a murderous dictatorship.

Her parents were looked on with suspicion because they refused to join the Nazi Party and had a Jewish-sounding last name. During World War II, she and her three sisters experienced starvation, bombing raids, and looting, pillaging, and worse by Russian troops in the town where they lived.

She was arrested by the Gestapo toward the very end of the war after she went looking for her grandparents and ventured into a part of the city that had been banned to civilians. She was only released after a young army officer, a draftee who was a friend of the family, managed to have her freed by threatening the local Gestapo head.

My father was Russian and considerably older than my mother. He was born in St. Petersburg when it was still St. Petersburg and had not yet been renamed Leningrad by the Bolsheviks. He was a very young Russian Army officer when he fought in the Russian Revolution against the Bolsheviks—a fight he believed strongly in, because, as he said, it didn’t take long to realize that the Bolsheviks had no interest in establishing a democracy when one saw their brutal tactics.

As he once told me, there is no point in trying to debate political issues with individuals who would rather show up in the middle of the night at your home and kill you rather than engage in civil discourse about how to direct the course of the nation. That is the way the communists dealt with any political opposition.

My father managed to get out of the Soviet Union at the end of the civil war and settled in Yugoslavia. There, he completed school, became a college professor in Slovenia, and lived a good life until the Nazis invaded. In 1946, he was forced to flee—once again—his homeland when Josip Broz Tito and the communists took over Yugoslavia. He literally got a phone call from a friend telling him his name was on a list to be arrested and shot, so he packed a suitcase and walked out of his front door. He ended up in the same refugee camp as my mother.

They were married in 1948 and immigrated to the U.S. in 1951. They arrived with a 3-year-old daughter, my oldest sister who had been born in the refugee camp, and almost nothing else. It is the same American story of so many other immigrants before them and since.

It was hard at first, but my family eventually prospered. My parents became citizens, had four more children, and were married for more than 40 years.

The point of this story is that America gave my parents and my family refuge. This wonderful republic gave my family the opportunity to prosper. We love this country and everything it represents—liberty, freedom, opportunity, and a limitless future for those who are willing to get an education and work hard.

Throughout my childhood were the stories from my parents, and my German grandmother, who joined us in America in 1953, of what life is like in a dictatorship. The three of them experienced firsthand how quickly freedoms can be lost, and I learned from them how fragile democracy can be.

Their stories made me realize how dependent our freedom and liberty is on preserving a secure, fair, and safe election process. As President Ronald Reagan once said, “Freedom is a fragile thing and is never more than one generation away from extinction.”

My first instance of witnessing this fragility myself occurred early in my legal career, when I volunteered to be a poll observer for a general election in Atlanta. I was shocked when I arrived at my assigned polling place to see the poll officials who were checking in voters at the registration desk asking the voters if they were Republicans or Democrats.

This was an overwhelmingly Democratic precinct. The only reason to ask that improper question was to intimidate the few Republicans in the precinct and discourage them from voting. I reported it to county election officials, who sent someone to the polling place to stop the illegal and threatening behavior of the local poll workers.

At almost the same time, there was considerable news about a widespread investigation of election fraud in Dodge County, Georgia. Eventually, 27 individuals were convicted, including the local sheriff and two county commissioners. They were involved in a widespread scheme to steal the election that included vote buying, double voting, and at least one fraudulent vote cast in the name of a dead person.

Since my first experience as a poll observer, I’ve served as a local county election official in two different states, enforced federal voting rights laws that protect the right to vote at the U.S. Department of Justice, sat as a commissioner on the Federal Election Commission, and worked on virtually all of the issues that affect how we vote and how our political campaigns and elections function.

I will keep working to guarantee that every American who is eligible to vote is able to do so—regardless of their party affiliation or partisan view—and that their vote is not stolen, diluted, lost, or rejected due to intentional misconduct or administrative mistakes by the election officials and other people responsible for ensuring a safe and fair election process.

And I will continue to do so despite the malicious and rancorous attempts by critics to prevent that work. After all, as President Theodore Roosevelt once said, “it is not the critic who counts,” but “the man who is actually in the arena” who strives to do the right thing.

Working to preserve the integrity of American elections is the right thing to do, and I won’t back down from this worthy deed anytime soon.