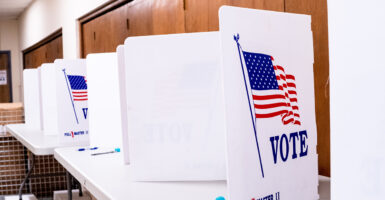 A polling station with the American flag ahead of the 2020 presidential election in Pittsburgh, Pennsylvania, Nov. 2, 2020. (Photo: Aaron Jackendoff/SOPA Images/LightRocket/Getty Images)

The right to vote is one of the most sacred rights that we as citizens can exercise. We select the individuals who will lead us and the policies we will live under in our daily lives. Yet the system is broken.

Growing up as a black teen during the 1960s, I knew of the tremendous sacrifices and the dangers that my friends and relatives endured to secure the right to vote for black people.

So before I go any further, let me be clear: I have zero interest in disenfranchising or suppressing the vote of any portion of the population. I am keenly aware of our country’s history of doing just that—from poll taxes to literacy tests and other obstacles that were constructed in the South to prevent blacks from voting.

I am also painfully aware of how both political parties have used our electoral system to gain and maintain power in our country, from gerrymandering to creating election laws that favor one party over the other.

In 2016, I watched with dismay as some on the left questioned the integrity of the process that elected Donald Trump as president. They boldly declared that he was illegitimate, promptly launched the “Resist” movement, and called for the end of the Electoral College.

Now I watch as the fraud, mismanagement, and last-minute election rules changes that occurred in 2020 have caused those on the right to question the electoral process and Joe Biden’s legitimacy as president.

In other words, hardly anyone—Democrats, Republicans, and independents—trusts the process anymore, and legitimate concerns exist about the fairness and accuracy of our elections.

Citizens are demanding that their elected leaders do something. Yet a bill currently in Congress, ironically called the For the People Act (H.R. 1), would only make things worse.

It would create a federal takeover of elections and force changes to election laws that would actually allow for greater fraud and election tampering.

Firstly, federalizing elections is a bad idea. Placing more power with the federal government just makes it easier for fraud, corruption, and abuse to be housed in one place.

At least with 50 states controlling their individual elections, we have a better chance of avoiding near-universal corruption, and the people of each state have greater access to their governors and legislators and can more easily demand reform of their election laws to ensure fairness and accuracy (and people can more easily vote those politicians out of office who refuse such reforms).

Secondly, H.R. 1’s proposed changes to election laws do exactly the opposite of creating trust. Under H.R. 1, no one has to prove they are who they say they are in order to vote.

It essentially outlaws voter ID laws and other identity verification procedures. It severely restricts the ability of states to check the eligibility of individuals registering to vote. It prevents states from participating in programs that compare state voter registration lists to detect individuals registered in multiple states. And it keeps them from removing many ineligible voters from their voter rolls.

Commonsense election integrity measures such as requiring voter ID, not allowing noncitizens to vote, and making sure people can’t vote more than once in an election have nothing to do with suppressing the vote.

Instead, they’re about ensuring that every single American’s legally cast vote gets counted, isn’t lost to some glitch or human error, and isn’t canceled out by an illegal one.

Biden says he wants to unify us. One of the biggest ways he can do that is to get Republicans and Democrats working together on ways to reform our election system. Unfortunately, H.R. 1 will only make the uncertainty and division over our elections grow.

Free and fair elections are the cornerstone of our constitutional republic, and every citizen, no matter their political persuasion, must be able to trust the voting process and its results. Otherwise, our democratic system itself breaks down.

For every American to have the assurance that his or her vote means something—indeed, for our republic to survive—we must do better to restore confidence in our elections.