Trump on Presidential Race: ‘They’re Trying to Steal an Election’ 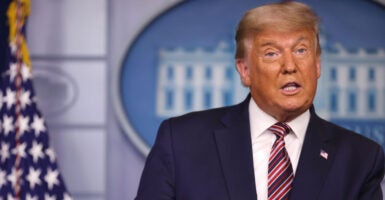 In remarks Thursday night, President Donald Trump argued that the outcome of the 2020 presidential election could be affected by voter fraud.

“Detroit and Philadelphia, known as two of the most corrupt political places anywhere in our country easily, cannot be responsible for engineering the outcome of a presidential race,” the president said.

Alluding to states where ballots are still being counted and the race is tight, Trump said, “The voting apparatus of those states are run in all cases by Democrats.”

“We were winning in all the key locations by a lot, actually, and then our numbers started miraculously getting whittled away in secret, and they wouldn’t allow legally permissible observers,” Trump added.

In Pennsylvania, the Trump campaign pursued, and won, a court case to allow closer observation of vote counting.

“They want to find out how many votes they need, and then they seem to be able to find them. They wait and wait and then they find them,” Trump said, adding, “It’s amazing how those mail-in ballots are so one-sided, too.”

A Pew Research Center poll, conducted in late July and early August, found that 60% of Trump voters and 23% of Biden voters wanted to vote in person. In contrast, 56% of Biden supporters and 17% of Trump supporters preferred to vote by mail.

The president was also critical of pollsters, saying, “Media polling was election interference, in the truest sense of that word, by powerful special interests.”

“These really phony polls … were designed to keep our voters at home, create the illusion of momentum for Mr. Biden, and diminish Republicans’ ability to raise funds,” Trump said. “They were … suppression polls.”