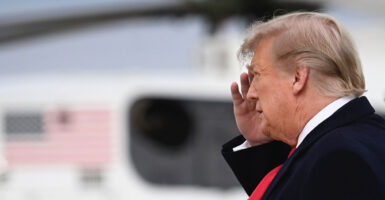 Additionally, Sen. Ted Cruz, R-Texas, and 10 other Republican senators are asking for an “emergency ‘audit’ of results in battleground states where President Donald Trump disputes the outcome,” according to DallasNews.com.

Tommy Binion, vice president of government relations at The Heritage Foundation, joins “The Daily Signal Podcast” to discuss that and more.

Binion: Sure, this is the final stage of the election process. What happens as part of the Electoral College is, each state submits their electors and certified election to the United States Congress. Then, the Congress counts the votes. The law governing that process allows for one senator and one member of the House of Representatives together to object to the counting of one state’s slate of electors in writing.

It turns out, that is what’s going to take place on Wednesday, at least one, but in the case of the House, 140 or so, and in the case of the Senate, upwards of 12 or so members have said that they will object to the counting of the electors from six of those states.

So, on Wednesday, when Congress goes to count these Electoral College votes, those objections will be made. Then, the debate and the vote in the respective chambers will take place. This is obviously related to the allegations of fraud and irregularities in the six contested states in the 2020 election.

One other thing to point out: I think that that debate that’s going to happen on Wednesday is going to be really consequential. Those that are making these objections are going to be given a chance to make their case, to present the evidence and make a compelling case that the fraud in this election did change the outcome, and those who believe it didn’t will be able to make their case.

So, I think this will be a process that has a certain amount of value. Then also, it’s a finite process. When this is over, it will conclude, the Congress will certify some electors, and someone will be sworn in as president on January 20th. So, there is some finality that will come with this as well.

Del Guidice: Well, The Washington Post has called Congress’ voting to certify the Electoral College vote a formality. Is it a formality, Tommy, or is it more than that?

Binion: It is very formal, but it is very consequential. The Electoral College, it didn’t happen until Congress certifies the vote. So, it is a very important step in the process. Perhaps The Washington Post thinks that the outcome is a foregone conclusion and that’s what they meant.

But I think there are a significant number of Americans who’ve lost their faith in our election system and a significant amount of members of the House and Senate that want to air their concerns, that want to examine these allegations.

Del Guidice: Well, Tommy, can you take us behind the scenes a little bit? We talked about how Congress counts the votes. Is there any physical counting that occurs, or is it more of just a review of the records that states have submitted?

Binion: It’s a review of the record. So, you can think of it as these certifications and records have been submitted by mail, actually, to the United States Congress. You can think of it as those envelopes being opened and counted. It isn’t as if [Senate Majority Leader] Mitch McConnell is going to be down there, using his fingers and toes to count up to 270, but this is the way that the Electoral College vote becomes official.

Del Guidice: We did talk about how, Tommy, that lawmakers can challenge the results. Can you walk us through what happens when someone challenges a result?

The two bodies will break up into their respective chambers, the House and Senate, and there will be a two-hour debate on each state.

So, let’s say the objection takes place on Pennsylvania’s electors. Then, the House and the Senate will have a debate about whether or not to count Pennsylvania’s electors. That debate will be, I think, equally divided between the Republicans and the Democrats, and members will have a maximum of five minutes each. So, we will see 12 members per side, if each of them uses the maximum amount of time, making their case that either the elector should or shouldn’t be counted.

This is the moment where all of the evidence is going to be seen. There is no more time. There is no further opportunity for evidence to impact the election. So, certainly, any evidence that President Trump has compiled or his legal team, or his staff in those states, that evidence will be given to the members of the House and Senate that are conducting this debate, and it will be put on display.

So, the American people will have a chance to look at it all in its totality and assess for themselves what they think about it.

Del Guidice: Well, Senator Ted Cruz of Texas and 10 other Republican senators, per a press release from Senator Cruz’s office, are asking Congress to immediately appoint an electoral commission with full investigatory [powers], and fact-finding authority to conduct an emergency 10-day audit on the election returns in disputed states.

Tommy, what is your perspective on this request from Senator Cruz and will it hold any more water? How would this work?

Binion: Well, I think any effort to take a look at the facts and inject transparency into this process is a welcome one.

What Senator Cruz is proposing is as close as he could find to a historical precedent. This is similar to what took place in the aftermath of the 1876 election in 1877. So, what they have said is that they will vote against the counting of the electors from the six states unless and until this commission takes place.

It also means that they are going to propose this commission and have a vote on the commission, whether or not that commission shall come to be.

So, essentially what they’re asking for is a 10-day pause and some official body to take a look at this. Again, I mean, I think the goal of Americans and this process and the goal of policymakers and the goal of groups like [The Heritage Foundation] should be to restore America’s faith in our electoral system and transparency and sunlight.

If we are ever going to restore our faith in our election system, transparency and sunlight are going to be two of the most important medicines we’re going to use in that treatment. So, that is what would happen if this commission came to be, and that’s why Senator Cruz is proposing it.

Del Guidice: Sen. Tom Cotton [R-Ark.] and Sen. Lindsey Graham [R-S.C.] have pushed back against contesting the Electoral College vote certification. In the House, Congresswoman Liz Cheney [R-Wyo.], who is in leadership, also objects. Tommy, do you think there will be long-term splits among conservative lawmakers due to this issue?

Binion: No, I don’t think there’ll be a long-term split. I mean, I think on the right, there is a healthy diversity of opinion. We have robust debate, and we challenge one another, and we subject ideas to scrutiny. There are perspectives on both sides of this issue and, by the way, the motives of both sides are completely reasonable.

The motives of both sides are to stick to the Constitution and have election results we can count on. There are very smart people and very patriotic conservative Americans on both sides of that debate, and I think it’s OK that there is a butting of heads, that there is some debate about what the right way to go about this [is]. This is what we want.

We want the Congress to debate about what its role under the Constitution is. So, I think that’s a good thing as well.

Del Guidice: Well, believe it or not, Democrats have in past years objected to Electoral College certification. Fox News reported that the last three times a Republican has been elected president—so, Trump in 2016, and George W. Bush both in 2000 and 2004—Democrats in the House brought objections to the electoral votes in the states the GOP won.

And in 2005, [then-Sen.] Barbara Boxer, a Democrat in California, along with another House member objected to Bush’s 2004 electoral votes in Ohio. So, Tommy, are Democrats being hypocritical to Republicans who have questioned the election results, given that they have done the very same thing in the past?

Binion: Well, yes and no. I mean, this has happened before, as you pointed out, and it is a feature of the statute that governs this process that there is an opportunity for the House to debate and vote on these things. It’s a pretty high hurdle to clear that you need a member of the House and a member of the Senate together to object in writing, and then both chambers need to debate and vote on that.

So, yeah, I mean this has been used by Democrats before, and I expect it will be used again. So, in a sense there is some hypocrisy in that, but I just think we all need to take a step back and realize, this is part of the process and in order for these results to be final, the process needs to take place, and we shouldn’t be afraid of that.

Del Guidice: Well, Tommy, thank you so much for unpacking this and for joining us today on “The Daily Signal Podcast,” it’s always great having you.

Binion: It’s great to be with you. Happy New Year again, and let’s all pay attention to what happens over the next few weeks. It’s going to be a wild ride.