The Latest, Fast-Moving Developments in the 2020 Election Season 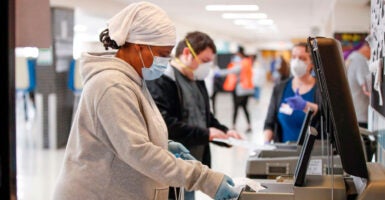 The Centers for Disease Control and Prevention have approved in-person voting so long as local election officials implement the same safety protocols we are seeing in retail establishments. Pictured: A woman casts her ballot in a presidential primary election in Milwaukee, Wisconsin, on April 7. (Photo: Kamil Krzaczynski /AFP/Getty Images)

I often write about the latest developments in the election area, including court decisions and legislative and regulatory changes. An unprecedented number of lawsuits have been filed by the radical left (at last count over 150 and counting) trying to use the COVID-19 health crisis as an excuse to nullify state requirements like voter ID laws.

They are also trying to force states to make numerous unwise changes, such as taking away the ability of voters to vote in person by forcing them to vote by mail.

The Heritage Foundation has published a new case study, “Four Stolen Elections: The Vulnerabilities of Absentee and Mail-In Ballots,” that demonstrates the risks of voting by mail.

So all of the groups pushing mail-in voting are also pushing to have more voters disenfranchised in November.

Developments are coming so fast it is hard to keep up with them. So here is a quick summary of just some of the most recent election-related news:

Those who constantly claim there is no election fraud were no doubt chagrined to learn that a former Democratic congressman, Michael “Ozzie” Myers, was indicted on July 21 by the U.S. attorney in the Eastern District of Pennsylvania, William McSwain.

Myers was charged with ballot stuffing, bribery, and obstruction of justice. It is alleged that he bribed a Philadelphia polling official to stuff ballot boxes with fraudulent votes in the 2014, 2015, and 2016 primaries, for Democratic candidates running for local, state, and federal offices, including judicial offices.

What we don’t know yet is whether any of the candidates who hired Myers knew what he was doing or that the consulting fees they were paying Myers were being used to buy fraudulent votes.

In the same vein, the New Jersey attorney general, Gurbir Grewal, has filed voter fraud charges involving absentee ballots against four individuals in Paterson, including a city councilman, over the May 12 municipal election that local authorities had foolishly changed to an all-mail election. The results of the election have been thrown in doubt.

The Heritage Election Fraud Database, which contains a sampling of proven fraud cases from around the country, is now up to 1,290 cases.

Do You Want to Trust Your Ballot to the Mail?

For those of you who think it is a good idea to trust your ballot and your vote to a postal service that regularly delivers your neighbor’s mail to you, you may want to read the report of the U.S. Postal Service’s inspector general on the problems encountered in the April 7 primary in Wisconsin.

This included over 3,500 absentee ballots never delivered to voters, as well as hundreds of other ballots mailed back to election officials by voters that were never postmarked by postal authorities, making it impossible for election officials to determine if they had been mailed in time to be counted.

Still not convinced? Then check out the latest report from the Public Interest Legal Foundation that analyzed official reports published by the U.S. Election Assistance Commission.

In the last four federal elections, more than 2 million absentee ballots were misdelivered; 1.3 million were rejected by election officials; and over 28 million were categorized as “unknown” by state election officials, i.e., they don’t know what happened to the ballots after they handed them over to the U.S. Postal Service to deliver.

Why Can’t We Vote in Person?

If we are all going to our grocery stores and pharmacies, why can’t we vote safely in person? We can, according to the latest guidelines from the Centers for Disease Control and Prevention, which were issued on June 22. Local election officials just need to implement the same safety protocols we are seeing in retail establishments, everything from making sure that voters “stay at least 6 feet apart” to disinfecting “surfaces that are frequently touched” in the polling places, such as “registration tables, pens, and clipboards.”

Other jurisdictions have already safely conducted elections with in-person voting during this and prior pandemics without spikes in infections, as explained in another Heritage study, “COVID-19 and Ebola: What We Can Learn From Prior Elections.”

Apportionment and Future Elections After the Census

President Donald Trump issued a memorandum on July 21 directing the Commerce Department (where the Census Bureau sits) to exclude illegal aliens from the U.S. population being counted as “inhabitants” for apportionment purposes.

The number of members of the House of Representatives that states are entitled to is reapportioned after every census based on the population of each state in comparison to the total population of the country.

Including illegal aliens in that count (as well as aliens here temporarily on business, as tourists, or as diplomats) dilutes the votes of American citizens and perversely incentivizes states like California to encourage more illegal immigration in violation of U.S. law in order to gain more congressional representation.

The law here is on the president’s side, including a Supreme Court decision, Franklin v. Massachusetts, as is fundamental fairness and equity.

Court Decisions in Tennessee and Alabama

On the litigation front in Phillip Randolph Institute v. Hargett, Tennessee got some good news for election integrity. On July 21, a federal judge refused to grant an injunction sought by liberal groups that would have prevented election officials from complying with the signature comparison requirement of state law for the upcoming August 6 primary.

This is one of the only security checks on absentee ballots to ensure they have been completed by the actual voter, and yet these groups wanted that protocol thrown out—something that has absolutely nothing whatsoever to do with COVID-19 despite the lawsuit being cloaked in the COVID-19 mantle.

They also wanted to eliminate Tennessee’s ban on vote harvesting and force the state to allow third-party strangers—like campaign staffers, party activists, and political consultants who have a stake in the election outcome—to show up at voters’ homes to collect their ballots. Talk about a way to spread the COVID-19 infection.

Alabama also got a double dose of good news when a divided three-judge panel of the 11th U.S. Circuit Court of Appeals upheld the state’s voter ID law in Greater Birmingham Ministries v. Alabama on July 21.

According to the majority, no reasonable fact finder could conclude that Alabama’s law, which applies to both in-person and absentee ballots, is discriminatory under the Voting Rights Act or the 14th and 15th Amendments. The burden on voters is minimal given the wide variety of IDs that satisfy the law, as well as the fact that the state will provide a free ID to anyone who doesn’t already have one.

And on July 2 in Merrill v. People First, the U.S. Supreme Court stayed an unjustified decision by a federal district court, saying that Alabama couldn’t enforce its ID or witness/notarization requirements for absentee ballots, despite the fact that a rule had been issued allowing notarization through videoconferencing—the same technology all of us are using every day.

Finally, we have an example of how one of the big social media platforms may be trying to influence elections in a way that may violate federal campaign finance law.

A very interesting complaint has been filed with the Federal Election Commission, where I used to be a commissioner, as well as with the U.S. Department of Justice, which is responsible for prosecuting criminal violations of the law.

Laura Loomer is running for Congress in Florida against incumbent Rep. Lois Frankel, D-Fla. Loomer was banned from Twitter for supposedly violating Twitter’s “hateful conduct policy” for saying that Rep. Ilhan Omar, D-Minn., is “pro-Sharia” and “anti-Jewish.” Yet Frankel has not been banned from Twitter and thus is able to use it for campaigning.

Loomer claims that Twitter is making a prohibited corporate contribution to Frankel by allowing one candidate to use its site but not the other candidate in the same race.

She says that “just as a radio or television station may not sell time only to a candidate’s opponent, Twitter may not do so either without providing equal access to all candidates running for the same office.”

Loomer complains that “Democratic officials have repeatedly made comments substantially similar to Loomer’s about Republican politicians without facing repercussions from Twitter.”

Overall, this is turning out to be a very eventful election year. Between the fights in the media and in the social platform world and between all of the candidates, along with the litigation and regulatory battles going on in almost every state over how to conduct the election in the face of COVID-19, this may end up being one of the most chaotic presidential election years we have had in decades.