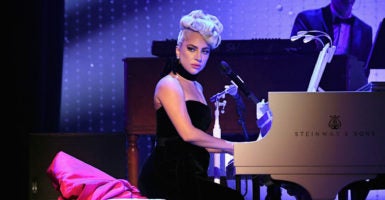 Hollywood is once again virtue-signaling to the rest of the country.

This time famous singer-songwriter Lady Gaga is calling Vice President Mike Pence the “worst Christian”—because he supports his wife’s decision to teach art at a Christian school in Virginia.

“You say we should not discriminate against Christianity—you are the worst representation of what it means to be a Christian,” Gaga said over the weekend in Las Vegas during a show. “I am a Christian woman and what I do know about Christianity is that we bear no prejudice and everybody is welcome.”

Gaga, who was nominated Tuesday for a Best Actress Oscar for her role in “A Star is Born,” should be better than this.

I find it completely ironic that Gaga is labeling Pence the “worst Christian,” because his wife, Karen Pence, announced earlier this month that she has chosen to resume teaching elementary art at a Christian private school.

By condemning Pence as the “worst Christian,” Gaga is coming off as both judgmental and intolerant.

It should come as no surprise that the Christian religion hasn’t changed its over 2,000-year position on marriage, namely that marriage it is a union between one man and one woman—or that a private school has the right to ask that attendees, employees, and those affiliated with the school respect and adhere to its statement of faith. Furthermore, those beliefs don’t only affect LGBT people; straight people, too, would be expected to follow Christian sexual norms.

What is shocking and disturbing is that people like Gaga in Hollywood, and elsewhere, think it is OK to tell the rest of society how to live their faith and deeply held religious beliefs, demeaning those convictions if they don’t fall in line with their own.

In 2011, Lady Gaga said, “I think tolerance and acceptance and love is something that feeds every community.”

But true tolerance presupposes that one’s understanding or position on something might conflict with the another person’s. What makes someone tolerant isn’t having no areas of disagreement with anyone, but having mutual respect even amid differences.

That’s something that Gaga, at least in this instance, is missing.

Gaga’s remarks about Karen Pence blatantly fail to include any recognition that women should be able to think, act, and work for themselves—no matter who their husbands are.

“To Mike Pence, who thinks it’s acceptable that his wife work at a school that bans LGBTQ,” she said, “you are wrong.”

Since when do liberals think a husband should control his wife’s career choices?

Gaga seems to fail to recognize that Karen Pence has a right to work two days a week wherever she pleases, including, yes, at a Christian private school.

If it’s her choice to work at a socially conservative private school, then it’s her choice, and all women, both on the left and right, should support that.

People like Gaga shouldn’t diss the career choices that Pence has made simply because those choices fall outside of their social or political views.

But once again, a celebrity is making clear that tolerance only veers to the left, not the right.