What Are Mike Pence’s Prospects for a 2016 Presidential Run? 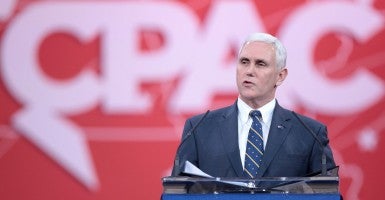 Now some believe Pence has bounced himself from the Republican presidential bracket.

A compelling speaker with a record of balanced budgets and broad support from social conservatives, Pence had been floated as a dark-horse candidate for the GOP’s 2016 nomination. Then the religious freedom debate erupted.

On March 26, Pence signed into law the Religious Freedom Restoration Act, which prohibits the state from “substantially burdening a person’s exercise of religion,” unless the government can demonstrate a “compelling interest” to violate this right and does so only by “the least restrictive means.”

Proponents called the law good policy, and opponents labeled it a license to discriminate against gays and lesbians. Quin Hillyer of National Review saw it as a political opportunity.

This was “Pence’s moment to shine,” he said. It was a chance to explain, “Reagan-like, above the heads of the media, directly to the people.”

But before a national audience, Pence came under intense scrutiny. On ABC News’ “This Week,” Pence sparred with host George Stephanopoulos and pledged “not to change the law.” Five days later, he did.

Daily Caller columnist Matt Lewis said Pence “essentially angered everyone.” Now Pence’s opponents have “branded him a bigot” and “his social conservative defenders now see him, at best, as a poor communicator, and at worst, as a wimp.”

Most of the potential 2016 Republican hopefuls quickly voiced their support for Indiana’s religious freedom legislation. On the Democratic side, only Hillary Clinton publicly opposed the law.

Tony Perkins, president of the Family Research Council, said this provides a glimpse of the national presidential election.

“Candidates were so quick to jump on this because they’re out there every day talking to people … and they know where Americans are when it comes to religious freedom,” Perkins said.

John Lewis of Marriage Equality USA agrees gay marriage and religious liberty will play a central role in the next election.

“In the last 10 years, we’ve seen that America has awakened and Indiana has awakened” to the fact that the “LGBT community is part of the fabric of America just like everybody else.”

Although he disagrees with Republican candidates’ support for the legislation, “someone in opposition isn’t an enemy,” he says. “They’re a future ally. We’re seeing more and more allies and future allies.”

After signing the new legislation Thursday, Pence departed for Europe to vacation with his family for the Easter holiday. When he returns, he’s likely to need to make a decision about a 2016 campaign or return to life in the governor’s mansion.

Unlike other potential presidential candidates, Pence hasn’t aggressively courted donors or lined up out-of-state supporters. Instead, he has hired mostly Hoosier campaign staff and kept an otherwise low profile. But even if Pence had made serious plans to run for president, Matt Lewis says the religious freedom controversy “effectively closes that option.”

Perkins agrees Pence no longer fits the presidential profile. “Conservatives are looking for a candidate with an aura about them that doesn’t say retreat.” They want someone, he says, “who will move forward, who won’t look back, and unfortunately, Mike didn’t do that.”