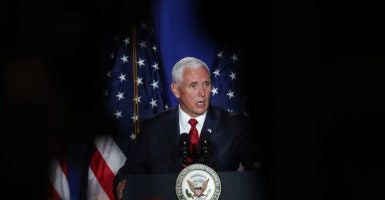 Vice President Mike Pence criticized Democratic lawmakers Monday for diminishing the atrocities of the Holocaust in order to promulgate their own political narrative.

“We can never allow the memory of those lost in the Holocaust to be forgotten by freedom-loving people around the world. We must teach our children and our children’s children the truth of what happened. We must preserve the memory of those lost for future generations,” Pence told the crowd while speaking at the Christians United For Israel Summit.

“In that same spirit, we must never allow the memory of those lost in the Holocaust to be cheapened as a cliché to advance some left-wing political narrative. But sadly, in recent weeks, that’s exactly what some Democrats have done in the national debate,” he continued. “Last month, a leading Democrat in Congress actually compared our U.S. Customs and Border Protection detention facilities to concentration camps. And her allies in Congress, the left, and the media shamefully came to her defense.”

Democratic New York Rep. Alexandria Ocasio-Cortez ignited a firestorm in June after she said during an Instagram livestream that the U.S. government is “running concentration camps on our southern border” to hold immigrants.

“That is exactly what [holding facilities] are. They are concentration camps,” Ocasio-Cortez said at the time. “I want to talk to the people that are concerned enough with humanity to say that ‘Never Again’ means something. The fact that concentrations camps are now an institutionalized practice in the home of the free is extraordinarily disturbing and we need to do something about it.”

“Never Again” is the phrase Jews worldwide use to make sure that the extermination between 1939 and 1945 never happens again, and the phrase signaled she was referring specifically to Nazi concentration camps.

The comments received massive backlash over historical inaccuracy and insensitivity to the millions of Jews who were slaughtered in concentration camps during the Holocaust. Ocasio-Cortez doubled down on the claim and a host of liberals in the media and in Congress tried defending the freshman congresswoman.

“As recently as yesterday morning, one of [Ocasio-Cortez’s] allies in Congress was asked if they agree with comparing the noble and compassionate work done by U.S. Customs and Border personnel at detention facilities to the concentration camps of Nazi Germany, and she answered, ‘absolutely,’” Pence said, seemingly referring to Democratic Michigan Rep. Rashida Tlaib, who defended Ocasio-Cortez’s comments while appearing on ABC’s “This Week.”

“To compare the humane work of the dedicated men and women of Customs and Border Protection with the horrors of the Holocaust is an outrage. The Nazis took lives. American law enforcement saves lives every day,” the vice president continued. “This slander of law enforcement was an insult to the 6 million killed in the Holocaust and it should be condemned by every American of every political party everywhere.”

Pence reminded the crowd of his trip to Auschwitz-Birkenau in February, where he toured the memorial site and paid respects on behalf of the United States.

The tour included viewings of crematoriums and a freight train that was used to displace the majority of the 1.3 million Jews held in Auschwitz, as well as an exhibition displaying inmates’ suitcases, shoes, and locks of their hair.

“As we gazed down at the remains of those gas chambers, as we walked past the personal effects—the piles of little shoes that were gathered there,” Pence said, “it merely reinforced our resolve that our answer to that unspeakable tragedy for this and every generation must be: Never again. Never again. Never again.”

Ocasio-Cortez’s office did not respond to a request for comment in time for publication.