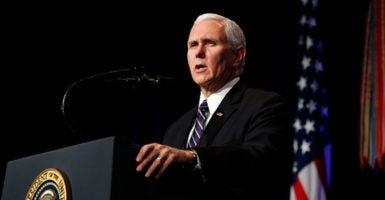 Vice President Mike Pence vowed Thursday that regardless of what happens in Congress, the administration will secure the southern border—and that includes a wall.

After a briefing on drugs at the southern border by senior officials from the Justice Department and Drug Enforcement Administration, Pence spoke to about 60 DEA employees at the DEA Museum in Arlington, Virginia.

“Let me assure you, as the debate goes on on Capitol Hill, one way or another, this president and this administration is going to secure our southern border, for the sake of the American people and all of you who enforce our laws,” Pence said.

After President Donald Trump signed a bill to reopen the government for three weeks, House and Senate leaders named members of Congress to a joint select committee to develop funding solutions for border security.

Trump insists that must include a physical barrier on the southern border, but the Democratic leadership oppose a wall.

DEA employees applauded the vice president, who is traveling to Miami on Friday to meet with officials about the crisis in Venezuela—where a freedom movement is seeking to depose the regime of Nicolas Maduro.

“I would particularly point to the DEA’s extraordinary work in Venezuela, a nation in crisis even as we speak, where your investigations have targeted the corrupt narco-dictatorship of Nicolas Maduro and helped bring drug-trafficking indictments and convictions against several of Maduro’s family and inner circle,” he said.

“The DEA has played a role, and now we see an interim president in Venezuela and freedom is rising in Venezuela, and your efforts have made a difference in empowering the people of Venezuela to reclaim their liberty,” the vice president added.

“The vice president heard directly from DEA about how you’re working to combat drugs, but also how we need to do more to secure our border,” Rosenstein said. “If we keep the drugs out of the country, we’ll save American lives.”

Most of the remarks were about drugs coming into the United States from across the southern border.

“Your jobs are more difficult and dangerous today than ever before—largely driven by a crisis on our southern border and the criminal syndicates and drug traffickers that you are dedicated to fighting,” Pence said.

“Transnational criminal organizations in Mexico and Central America represent one of the greatest national security and public health threats in America,” he said. “Every day that our southern border remains unsecure gives these criminals another day to peddle their poison and spread their violence to communities large and small across this country.”