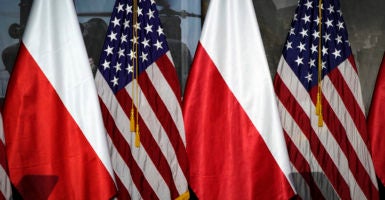 American and Polish flags are seen ahead of the visit of U.S. Vice President Mike Pence at the Army Transport Logistics base in Warsaw, Poland, Feb. 13, 2019. (Photo: NurPhoto/Contributor/Getty Images)

Vice President Mike Pence will travel to Poland this weekend in place of President Donald Trump, who canceled his three-day visit on account of Hurricane Dorian’s looming arrival in Florida.

During this visit, Pence is expected to announce measures that further solidify the U.S.-Polish bilateral relationship, the revitalization of which has proven one of the administration’s most important policy achievements.

In a marked shift from his predecessor, Trump has embraced Poland, a crucial U.S. ally in Europe. The U.S. and Poland have worked together to strengthen NATO deterrence, improve European energy security, and moving forward possibly to enact measures to mitigate risks associated with next-generation telecommunications infrastructure.

Poland was one of Trump’s first overseas destinations in July 2017. In a speech in Warsaw’s Krasinski Square, Trump delivered a seminal foreign policy address stressing the need for a robust Western response to Russian aggression, and delivering a vigorous defense of the Western values that underpin the transatlantic bond.

“Our own fight for the West does not begin on the battlefield—it begins with our minds, our wills, and our souls,” he said. “ … Our freedom, our civilization, and our survival depend on these bonds of history, culture, and memory.”

Poland has proven itself a valuable ally.

In 2018, Poland was one of only seven NATO allies who spent 2% of gross domestic product on defense and one of 16 allies that reached the benchmark to spend 20% of their defense budget on equipment.

Poland has prioritized the purchase of American equipment, including a $4.75 billion deal for two Patriot missile batteries, and a $414 million deal to purchase 20 high-mobility artillery rocket systems.

In May, Poland submitted a formal “letter of request” to purchase 32 F-35s to replace its aging Soviet-era fighter force.

The Trump administration has maintained U.S. troops in Poland, serving as the framework nation in the country for NATO’s Enhanced Forward Presence, a set of deployments agreed upon at the 2016 Warsaw Summit to deter further Russian aggression.

Furthermore, under Trump, funding for exercises, infrastructure, training, and increased U.S. presence in Europe through the European Deterrence Initiative has nearly doubled from the final year of the Obama administration, with more than $6.5 billion in funding enacted for the initiative in fiscal year 2019.

In June, Trump and Polish President Andrzej Duda signed an agreement strengthening security cooperation, and laying the groundwork for an additional rotational deployment of 1,000 American troops to Poland.

The two nations are expected to sign a more detailed memorandum regarding the new U.S. deployment, which the vice president could sign while in Warsaw.

Warming U.S.-Polish relations in recent years has extended to the vital realm of energy security. Like the United States, Poland has firmly fought against the Nord Stream II pipeline, which would further entrench Russia’s position in Europe’s energy supply and geopolitical calculus for decades to come.

Additionally, Poland is working to diversify its own supply of energy, including with a liquefied natural gas import terminal in Swinoujsci , and a planned second LNG import terminal at Gdansk. Polish companies have also inked deals with U.S. companies to import American natural gas.

This weekend, the U.S. and Poland will begin addressing two glaring deficiencies in the bilateral relationship; the continued exclusion of Poland from the Visa Waiver Program and security concerns over China’s threat to telecommunications infrastructure.

The Trump administration will reportedly nominate Poland for inclusion in the Visa Waiver Program, a U.S. program in which participating nations share information on serious criminals, terrorists, and lost and stolen passports with the U.S. in exchange for visa-free travel up to 90 days.

Finally, in the coming days, the U.S. and Poland are expected to sign a 5G cooperation agreement. The threat from China to telecommunications infrastructure is a continued focus of the Trump administration.

In Poland, Chinese company Huawei already controls over half of the nation’s telecommunications infrastructure.

While the exact parameters of the new agreement have not been released, one Polish official was recently quoted as saying, “5G will be too important security-wise to give it away to someone we don’t fully trust.”

That Warsaw is showing signs of aligning with Washington’s thinking on 5G is a crucial policy victory, which could place pressure on other European allies to follow suit.

Trump deserves credit for repairing U.S.-Polish relations, the fruits of which will be on display in the coming days as the two nations agree on new avenues of cooperation regarding 5G, energy, security, and visa waiver.

The degree to which each side follows through on these positive steps will determine to what degree posterity views robust U.S.-Polish relations as one of the administration’s signature foreign policy achievements.