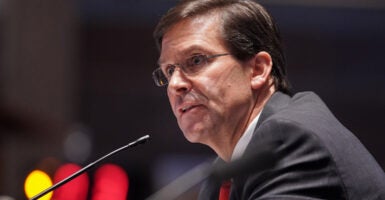 “Today, our strategic competitors China and Russia are attempting to erode our hard-earned gains as they undermine international rules and norms and use coercion against other nations for their own benefit,” Defense Secretary Mark Esper says. Pictured: Esper testifies July 9 during a House Armed Services Committee hearing in Washington. (Photo: Greg Nash/Pool/Getty Images)

The readiness of the nation’s military has grown in the past few years, but only congressional support for annual increases in defense spending will ensure that trend continues, Defense Secretary Mark Esper said Thursday in a speech at The Heritage Foundation.

“I would like to see 3 to 5% annual real growth in the Defense Department to stay ahead of the challenges we face, especially from China,” Esper said in remarks at the think tank’s virtual event focused on the topic of readiness.

Esper outlined what he called the challenges of implementing the Trump administration’s 2018 National Defense Strategy.

“Today, our strategic competitors China and Russia are attempting to erode our hard-earned gains as they undermine international rules and norms and use coercion against other nations for their own benefit,” he said.

“The U.S. has maintained military superiority for so long that many take it for granted. But it’s far from guaranteed,” Heritage Foundation President Kay C. James said in introducing Esper at the think tank’s Capitol Hill headquarters.

“If we don’t continue to invest in replacing decades-old ships, planes, tanks, and other equipment, we’ll soon fall behind,” she said. “And then it may be too late to catch up.”

Under Esper’s “stellar leadership,” James said, the Defense Department not only pledged to rebuild military readiness but “made great progress” despite challenges that include COVID-19.

Esper, an Army infantry veteran who became defense secretary in July 2019 after serving as secretary of the Army, said the “irreversible implementation” of the National Defense Strategy is his No. 1 priority.

He described the document as guiding the Pentagon’s work to protect America’s competitive advantages and “defend free, open global order.”

The National Defense Strategy’s three main prongs, he noted, are improving the lethality and readiness of U.S. forces; strengthening allies and building partners; and reforming the department for greater efficiency and accountability.

“The question we must answer is this: If called upon to fight tonight, are we ready?” Esper asked. “Today, given our efforts over the past few years, I am fully confident that the answer to that question is a resounding yes.”

He said years of “insufficient budgets” caused “significant damage” to readiness until President Donald Trump’s inauguration in January 2017 saw the nation begin to reverse course by adding over $200 billion to the defense budget through fiscal 2019.

The Pentagon has made strides in the categories of policy, people, and performance, Esper said.

In policy, he said, the Defense Department has made the biggest changes in global force management since the aftermath of the 9/11 terrorist attacks to improve both readiness and unpredictability.

He said the two major policy shifts were to allow rapid repositioning of forces, designed to enhance deterrence and introduce uncertainty for adversaries, and to increase the number of immediately available forces as well as “contingency response” forces.

Most Americans saw this change in action in March, when the Navy rapidly deployed the hospital ships USNS Comfort and USNS Mercy to the East and West Coasts to provide doctors and beds as the COVID-19 pandemic unfolded.

As the new coronavirus began to spread early in the year, Esper said, the Defense Department moved to minimize the impact on its own personnel while supporting other government agencies. The department’s 140-plus labs have conducted more than 1.2 million COVID-19 diagnostic tests, he said, and now perform more than 40,000 a week.

As for personnel in general, Esper said, the Pentagon is providing better training for military competition between great powers.

He said he directed the National Defense University, which trains students in setting national security strategy and is funded by the Defense Department, to devote 50% of coursework to China by the next academic year. He also tasked the services to make the communist regime’s People’s Liberation Army the “pacing threat” in military schools, programs, and training.

The number of military personnel has grown by 30,000 since 2016 and more service members are able to deploy quickly, he said.

At the same time, the Pentagon gives servicemen and servicewomen longer to recover between deployments, including time for training and family. It has expanded child care and support for spouses, improved housing, and offers better mental health and other assistance, Esper said.

As far as performance, Esper said, the Defense Department has improved equipment maintenance.

“As a result,” he said, “we now have more ready aircraft on the flight lines and pilots with greater proficiency and experience.”

Thanks in part to more hiring, he said, the Pentagon has improved maintenance rates for the Navy’s ships. The Navy plans to devote $20 billion in the next 20 years to modernize public shipyards on the way to a fleet of more than 500 ships by 2045, Esper said.

He said the Defense Department also has enhanced troops’ capability in ground combat with a new emphasis on armored vehicles.

Better performance in the cyber realm is key, Esper said:

We know adversaries and malign actors are attempting to attack and jeopardize the networks that our platforms, weapons, and formations rely upon to operate. The tremendous investments we have made in our most lethal capabilities could be rendered ineffective in a high-end fight unless we treat cyber-capability readiness with the same seriousness as we do material or personnel readiness.

Esper appealed for a long-term commitment from Congress toward the end of his 20-minute speech, after which he took related questions for another 20 minutes from Thomas Spoehr, a retired Army lieutenant general who directs Heritage’s Center for National Defense.

“The success of our efforts relies on the support of Congress,” Esper said, adding:

In the face of rising strategic threats, we depend on steady fiscal commitments to sustain our current force and prepare for tomorrow’s challenges. The past few years of funding allowed us to rebuild our readiness after years of insufficient budgets, yielding significant results. Fifty-two percent of our major combat force elements are able to generate more combat power during the initial phases of a conflict today than they could in 2017. …

It is a vision in which we have more planes in the air, more ships at sea, more units prepared to go into combat at a moment’s notice, more cyberwarriors online, and more space assets ready to defend the high ground.