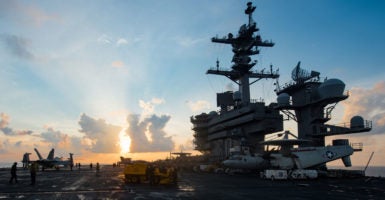 The House Armed Services Committee last week unanimously approved its version of the National Defense Authorization Act, with all 56 members who were present voting in favor of the legislation.

The July 1 action was an important bipartisan show of support that eluded the House of Representatives last year, when the committee lost all Republican members by setting a lower level of defense expenditures and emphasizing divisive issues.

This year, the House stayed at the budgetary caps negotiated last year at $740 billion, which were also followed by the Senate. This falls short of the growth recommended by Defense Secretaries James Mattis and Mark Esper to rebuild the military to meet the challenges outlined by the National Defense Strategy. Nevertheless, it advances important priorities for the Department of Defense and the nation.

The House panel also avoided many of the progressive measures that were in discussion in last year’s bill, such as altering the rules to allow transgender individuals suffering from gender dysphoria to join the military, or reducing our nuclear deterrent capabilities.

These and other ideas might still reemerge when the National Defense Authorization Act is considered by the whole House of Representatives. But hopefully the House leadership will seek to nourish and protect the impressive bipartisanship started in the committee.

When it comes to substance of the authorization, the bill contains some important provisions that will help advance America’s national security and defense. The legislation would constrain the removal of U.S. troops from Germany by requiring certification that it will not harm American interests or weaken the U.S. response to challenges posed by Russia in Europe. This is largely aligned with The Heritage Foundation’s recommendation on the issue.

Additionally, the House version fully funds the European Deterrence Initiative, which further emphasizes the importance of having an American presence in Europe to deter Russia. The initiative is an important tool that enhances cooperation among European allies and the United States in presenting a strong and unified front against Vladimir Putin’s expansionism in the region.

The House uses the model of the European Deterrence Initiative to create the Indo-Pacific Reassurance Initiative. The important aspect of this new initiative is that, following Heritage’s recommendations, it would serve to augment American presence in the Indo-Pacific region by providing better infrastructure and positioning for our assets.

The Indo-Pacific region is marked by large distances. This will push the Department of Defense toward developing a better logistical infrastructure. It will enhance U.S. presence and deterrence against the challenges currently posed by China and its growing naval, air, and missile forces.

Lastly, as a touching gesture for a public servant who dedicated much of his career to national defense, the bill will be named after Rep. Mac Thornberry, R-Texas, currently the committee’s ranking member and a former chairman. It is a fitting tribute for a man who is retiring from Congress at the end of this session.

A long road lies ahead for the National Defense Authorization Act. Both the full House and the full Senate have to consider and approve it so it can go into conference. Only then will it go to President Donald Trump for his signature.

However, the process thus far has garnered strong bipartisan support. This shows that a shared understanding exists on the importance of maintaining a strong national defense. America needs to continue nurturing that understanding.