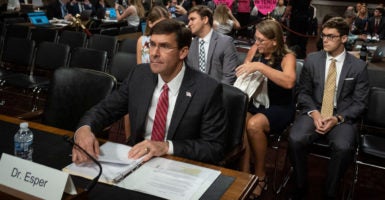 Secretary of defense nominee Mark Esper prepares to testify before the Senate Armed Services Committee during his confirmation hearing on July 16. Esper has been acting secretary of defense since Patrick Shanahan stepped down due to revelations about his past. (Photo: Pete Marovich/Getty Images)

The Senate Armed Services Committee confirmation hearing Tuesday on Mark Esper’s nomination to serve as secretary of defense was overdue, as was the panel’s vote Thursday in favor of sending it on to a vote of the full Senate, possibly next week.

That America needs a presidentially nominated, Senate-confirmed secretary of defense should be obvious. We have been without one since Jim Mattis left on Jan. 1, more than six months ago. That’s not useful—much less wise—during a period of intense competition with China, Russia, and others.

That Esper is extraordinarily qualified for the position should also be obvious.

He was an Army infantryman, with service in the 1991 Gulf War. He served in uniform in the active-duty Army, National Guard, and Army Reserve, giving him a unique perspective to understand the challenges of military service, an important consideration for a secretary of defense.

Esper understands how Congress works, having served in a number of key Senate staff positions in national security. He also understands the Pentagon, having successfully served as secretary of the Army for two years now, leading a renaissance in Army modernization.

Experience in the defense industrial base is extraordinarily useful for a prospective secretary of defense, as it provides a strong basis to understand how to get the most value from our precious defense dollars from our private-sector partners.

Today, it’s essential that the Pentagon partner with industry, as the Defense Department absolutely depends on its commercial partners for cutting-edge innovation and technological expertise. Such capabilities have all but dried up in the government.

It’s that experience in the defense industry that created the only controversy at the hearing.

Despite a long history of defense industry executives successfully serving in the Pentagon, and the nearly complete absence of any associated misconduct, a select few look on experience in the defense industry as automatically “tainting.”

She also demanded that Esper recuse himself from any decisions involving Raytheon for an additional two more years than the already highly restrictive laws require.

When Esper correctly declined to do so, Warren stated that Esper’s position “smacks of corruption, plain and simple,” and went on to say that absent his agreement to accede to her demands, Esper “should not be confirmed as secretary of defense.”

Fortunately, others on the committee were quick to condemn Warren’s outrageous statements. Sen. Rick Scott, R-Fla., apologized for Warren’s conduct, explaining that she probably just needed a “moment for her presidential campaign.”

Esper himself defended his position, pointing to his years of service in uniform and that he has led a life guided by the values of duty, honor, and country he learned at West Point.

Clearly, there are already plenty of barriers to getting the best people to serve in the U.S. government.

Salaries typically top out around $170,000 a year, which is a lot of money, but to a successful and accomplished executive, it looks anemic.

But many are willing to make that sacrifice to serve their country.

Before taking a position in government, ethics rules normally require individuals to divest any capital investments, often requiring taking a loss due to timing. For those with substantial holdings, that can often mean a loss of millions.

Similar ethical restrictions govern post-government employment—meaning that someone who spent a lifetime becoming an expert in a field must wait at least two years before re-entering that field in the private sector, resulting in a large loss of earnings in an individual’s peak earning years.

Warren’s aformentioned proposal to extend that two-year period to four further disincentivizes anyone considering serving their country, except for the independently wealthy.

That’s despite the fact that there’s no contemporary history of any evidence of corruption or influence-peddling between the defense industry and Pentagon officials.

Some would say that if you’ve led an ethical life, why fear such examination? The answer is, because all too often, fairness or perspective goes by the wayside when someone’s private life is exposed to the toxic world of politics and partisanship.

Confirmation hearings often resemble grand theater, as when a petulant Warren asked to be recorded voting “no” on the voice vote in closed session. Defense News reported that she intends to deny unanimous consent for a vote on Esper in the full Senate.

So, there are many disincentives to attracting the best people to serve in key government positions. Fortunately, however, despite all these obstacles, there are still some patriots willing to come forward and serve.

Given Esper’s experience and record, it looks like he is headed for confirmation, which is good for the country, given all the challenges that America faces.  Let’s hope that confirmation is swift.