How China Is Overtaking the US With World’s No. 1 Navy 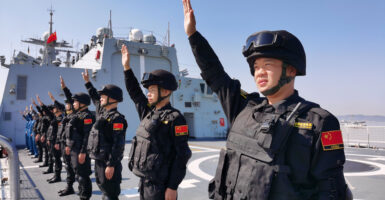 The Chinese navy is already the largest in the world with an estimated 350 ships and submarines, but Beijing is not stopping there. Pictured: Special operation troops of the Chinese naval fleet wave farewell at a port in Zhejiang province, China, April 28. The 35th Fleet of the Chinese People's Liberation Army Navy that day left the port city of Zhoushan for the Gulf of Aden and waters off Somalia to escort civilian ships. (Photo: Jiang Shan/Xinhua/Getty Images)

Chinese shipbuilders have produced more than 100 warships in the past 10 years, a build rate easily outstripping that of the U.S. Navy.

The Chinese navy is already the largest in the world with an estimated 350 ships and submarines.

The speed with which China’s first aircraft carrier was built is the fastest in the history of aircraft carrier construction. It took only two years from the laying of the hull to its launch. It was delivered to the Chinese navy nearly a year ahead of schedule late last year.

Three nuclear-powered supercarriers are now under construction and are expected to form the center of carrier battle groups in the 2020s.

The Chinese navy is augmented by a shadow fleet of more than 2,000 fishing boats fishing illegally in other countries’ coastal domains. Some of those boats are not fishing at all. Disguised as fishing boats and called “sea phantoms,” they are fire-support vessels equipped with 16-tube rocket launchers and anti-aircraft guns.

These sea phantoms also resupply the People’s Liberation Army offshore garrisons and perform such functions as intelligence gathering and countersurveillance.

Four of these newer subs are already operational and are expected to be equipped with the new, longer-range JL-2 submarine-launched ballistic missiles with a range of 5,281 miles.

China is engaged in a significant effort to upgrade its mine warfare prowess. Relying heavily on sea mines, the Chinese navy is already fully capable of blockading Taiwan and other crucial sea lines of communication in the western Pacific area.

Taiwan’s relative trade dependence, the inherent difficulty in clearing mines, and the extreme weakness of American mine-clearing capacity, particularly in the Pacific theater, all make blockading Taiwan a tempting strategy for China.

Sea mines, used to complement a variety of other capabilities, constitute a deadly serious challenge to U.S. naval power in East Asia.

Most of China’s 1960s-era aircraft have been replaced, and the People’s Liberation Army Air Force is now dominated by fourth-generation fighter aircraft. They include the domestically designed and produced J-10 and the Su-27 fighter, which are comparable to our F-15 or F-18 and dominate both the fighter and strike missions.

China is also thought to be preparing to field two stealth, fifth-generation fighter designs. The J-20 is the larger aircraft, resembling the American F-22 fighter. The J-31 appears to resemble the F-35, but with two engines rather than one.

China’s pursuit of a range of advanced weapons with disruptive military potential is part of its plan to seek dominance in the high-tech weapons area. They include maneuverable missile warheads, hypersonic weapons, laser and beam weapons, electromagnetic rail guns, space weapons, and artificial intelligence-directed robots.

We do not have any defense against hypersonic missiles, estimated to have a speed of Mach 20 (about 15,000 mph).

It’s also developing its own advanced SAM, the HQ-9, which is deployed both on land and at sea.

China has used cyberwarfare to save billions of dollars in research and development costs. Chinese hackers stole massive amounts of highly sensitive data related to undersea warfare, including secret plans to develop a supersonic anti-ship missile for use on U.S. submarines.

The hacks took place in January and February 2018 and targeted an unidentified contractor working for the Naval Undersea Warfare Center in Newport, Rhode Island. Taken were 614 gigabytes of material relating to a closely held project known as “Sea Dragon,” as well as signals and sensor data, submarine radio information relating to cryptographic systems, and the Navy submarine development unit’s electronic warfare library.

On Oct. 6, Defense Secretary Mark Esper rolled out a new 25-year road map with a goal of about 355 manned ships and half as many unmanned surface and subsurface ships. His plan calls for fewer large carriers and more submarines in a Navy of 500 ships or more. He also wants an attack submarine force of 70 to 80 boats, up from today’s 55.

Six years ago, General Dynamics was awarded a $17.8 billion contract to build 10 Virginia-class submarines to replace the Los Angeles class, which has been on station since 1976. With nuclear power giving them limitless range, attack submarines can prowl the globe, shadowing Russian and Chinese ICBM submarines or delivering devastating missile barrages. They covertly collect intelligence that cannot be obtained in any other way.

“We are at a point where we must chart a new path to a future fleet that will maintain our naval superiority long into the future,” Esper said, adding:

Cutting-edge technologies are altering the character of warfare and expanding the geometry of the battlefield in multiple ways. Artificial intelligence, autonomous systems, ubiquitous sensors, and long-range precision weapons will play an increasingly leading role in a future high-end fight.

Whoever harnesses these technologies first will have a clear advantage on the high seas for years to come. Getting there ahead of everyone else demands a whole-of-nation effort.