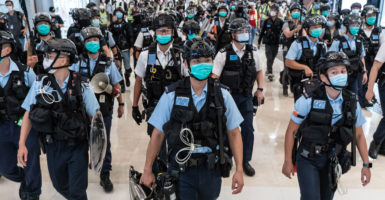 The U.S. should lead an international effort to investigate the origins of the new coronavirus. Pictured: Police wearing face masks move into position Tuesday in response to a protest at the International Finance Center shopping mall in Hong Kong, China. (Photo: Anthony Kwan/Getty Images)

The growing chorus to “punish” China for how it has handled the COVID-19 crisis is understandable and justifiable. We need to be smart about how we do this, building up American strength even as we hold China accountable.

If the challenge of our era is a multidecade great-power competition with China, the United States can do a range of things to win.

And although this competition is going to require compromise, none of the following 10 suggestions unnecessarily undermines economic freedom—the true engine of American strength. These are real, “shovel ready” ideas.

1. Get to the bottom of the Chinese Communist Party’s handling of the COVID-19 crisis.

The U.S. should lead an international effort to investigate the origins of the new coronavirus, which causes the disease COVID-19. This is going to require the Chinese government to provide access to facilities, records, and personnel it is unaccustomed to offering.

Every day, we live with the results of the Chinese government’s early cover-up of the coronavirus outbreak. The U.S. and the rest of the world should demand answers so as to avoid its happening again. How Beijing responds will say a lot about the nature of the competitor we face.

2. Expand the scope of America’s traditional commitment to free trade.

Expand partner by partner if necessary. Start with Japan and the seedling of a free trade agreement that the Trump administration signed with that nation last year. Resolve trade disputes with India.

This is a long-term endeavor. The U.S. can wait for a full-fledged free trade agreement with India. In the meantime, it should be looking for new partners that can be brought into the Quad, for their active collaboration and perspectives.

3. Commit to crafting the military we need in the Indo-Pacific.

Congress should support the key elements of the “Regain the Advantage” plan from Adm. Philip Davidson, commander of U.S. Indo-Pacific Command, to increase investment in America’s Indo-Pacific military presence.

In its annual Index of U.S. Military Strength, The Heritage Foundation proposes budgets that can support the U.S. in fighting two major wars at roughly the same time. That requires more ready ships, planes, and troops—a lot more.

This is going to be a difficult conversation to have as the U.S. grapples with the debt it has incurred in dealing with COVID-19. But right-sizing the military to protect American interests is not first and foremost a budget exercise.

Would-be budget cutters are going to have to identify what region of the world and what American interests they are willing to write off. It certainly cannot be the Indo-Pacific if the U.S. is going to compete with China’s rising military might.

4. Prepare the U.S. economy for a long competition with China.

This means standing firm in barring companies such as Chinese government-linked Huawei Technologies Ltd. and ZTE Corp. from supplying the U.S. government and participating in the build-out of our 5G network. It means encouraging our allies to do the same.

With technology generally, “protecting” is not the same as “protectionism.” We need to enhance export controls and investment approval processes to protect against specific threats.

Congress passed landmark legislation to do this two years ago—the Export Control Reform Act and the Foreign Investment Risk Review Modernization Act. Now, we need to properly execute those laws, especially to address the leakage of emerging and foundational technologies.

What “protecting” certainly does not mean is imposing tariffs on American consumers of foreign steel, aluminum, or automobiles.

In recent months, China has demonstrated a detrimental influence over the World Health Organization, an entity of the United Nations, but that did not spring out of nowhere. It has been building for more than a decade. And it’s not just at the leadership level that this detrimental influence is a problem. It’s at the working level.

Chinese in these organizations never adopt the interests of the organizations as their own. They continue to represent Chinese interests. We’re not going to change that disposition, but we can at least dilute it.

7. Work with the Europeans on our common concerns about China.

The U.S. and Europe should coordinate on export controls and investment regimes and on noneconomic issues such as compelling China’s respect for freedom of navigation. This is so much trickier than it seems.

The Europeans have enormous equities in their relationships with China, both inbound and outbound. They are not going to sacrifice that for geopolitical theories. But where there are concrete threats, we will find willing partners. “Willing” but complicated.

They, like us, are real democracies. Their publics and special interests will constrain the choices their governments can make if we try to bully them. So it won’t be easy, but doing the difficult diplomacy necessary to get on the same page with the Europeans will have greater payout than any other diplomatic investment we can make.

8. Use existing laws to counter Chinese economic espionage and theft.

We need to use the laws we have to their fullest extent, as the Justice Department is doing with its “China Initiative” to crack down on the theft of technology from American companies and universities. With regard to this theft, the answer is not preventing Chinese students from enrolling in U.S. universities.

We should want the best and the brightest from around the world attending our universities and contributing to their research. We just need to enforce the law governing their work.

Similarly, The Treasury Department already has the authority to sanction foreign entities that have used cyberattacks to pilfer the technology of U.S. companies. Use it. There is also more we can be doing in the World Trade Organization.

Steps to this end include conclusion of a free trade agreement with Taiwan, making available the equipment and expertise that it needs to contribute to its own defense, and vigorously advocating for Taiwan’s inclusion in international organizations.

If the debacle over the World Health Organization’s handling of Taiwan’s early COVID-19 warnings are not enough to bring home this need, it’s hard to know what will be. In truth, Taiwan is on the front line of the U.S.-China great power competition. The U.S. simply cannot afford to let Taiwan be absorbed by China.

The U.S. should use sanctions provided in laws such as the Global Magnitsky Act to punish Chinese human rights abusers in Xinjiang and Tibet, and everywhere else fundamental liberties are under assault. We need to stay focused on the struggle in Hong Kong and see that the Hong Kong Human Rights and Democracy Act is thoroughly enforced.

But sanctioning your rival is the easier part of global competition. The more difficult part is holding others in the region to universal moral standards.

We need to be smart about it. But if there is to be a truly values-based element to our Indo-Pacific strategy, the U.S. has to stand for something. And in the long run, a freer Indo-Pacific will be a region more friendly to American interests.

Strategic competition with China cannot be binge-watched. It is going to be a long and complicated fight with no clear historical analogy. The COVID-19 crisis may be the spur Americans need to gird themselves for that fight.

But we cannot overreact in the moment and set precedents that actually will undermine that long-term effort. We have to bank on the reality that China will remain, and grow, as a global economic and diplomatic presence.

We can do plenty to deal with that.