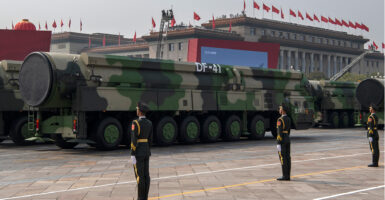 J. William Middendorf, former secretary of the Navy, says America must be prepared to prevail over China and other adversaries. Pictured: The Chinese military's new DF-41 intercontinental ballistic missiles, which reportedly can reach the U.S., are part of a parade Oct. 1, 2019, in Beijing. (Photo: Kevin Frayer/Getty Images)

Middendorf, author of the new book “The Great Nightfall: How We Win the New Cold War,” joins the show to explain the threat that China poses to America’s interests. Middendorf, a member of The Heritage Foundation’s Board of Trustees since 1989, also outlines what the U.S. military must do to be prepared to stand against our adversaries.

“The Daily Signal Podcast” is available on Ricochet, Apple Podcasts, Pippa, Google Play, and Stitcher. All of our podcasts may be found at DailySignal.com/podcasts. If you like what you hear, please leave a review. You also may leave us a message at 202-608-6205 or write us at letters@dailysignal.com. Enjoy the show!

Virginia Allen: I am joined by the former secretary of the Navy, William Middendorf. Sir, thank you so much for being here today. We really appreciate it.

Allen: Your bio is incredibly impressive. You served as the United States ambassador to the Netherlands before becoming the secretary of the Navy in the mid-1970s.

You also headed the CIA transition team for then-incoming President Ronald Reagan. And you served as the U.S. representative to the European Economic Community, now known as the European Union. We could go on and on about all of the various roles that you’ve served in.

You’ve also authored a number of books, including your latest, “The Great Nightfall: How We Win the New Cold War.” And you were serving in the Navy and positions of leadership in the American government, really all throughout the Cold War. Do you mind just taking a few minutes to tell us a little bit about what that was like to be serving on the front lines during the Cold War?

Middendorf: I was mainly in the shipbuilding side of that. Of course, the secretary of the Navy’s job is to provide the material and weapons and recruit the men and women for the Navy. So during the Cold War, I sponsored long lead time ships and planes that were needed to win the Cold War. Long lead time is about 10 years.

We also started the Aegis Missile program, building a fleet of 60 ships, the early work class cruisers with advanced radar that could detect advanced weapon systems from the Soviet Union and shoot them down.

And then finally, we built the F-18 advanced aerial attack fighter. Ten years later, they were front and center at the apagoge of the Cold War and [with them], along with advanced weapons developed by the Air Force and Army, we were able to win the Cold War. The Soviets had to stand down.

Based on that experience, I wrote the book “The Great Nightfall: How We Win the New Cold War,” which is basically against China. China … is building some very advanced weapons systems and they pose a threat today that’s exponentially greater than the threat we faced at the end of the first Cold War.

Allen: Can you tell us a little bit more specifically about that threat? Because I think many Americans, we view China as a threat, certainly economically, certainly technology-wise. But specifically, how is China a threat to America militarily?

Middendorf: Several ways, both conventional and unconventional warfare. Their Navy now exceeds ours. They have built 350 ships and ours is 293. Most people are not aware of that. And they’re building their certain force carriers and they’re proposing a fifth carrier, which will be nuclear.

The missile capabilities they have are very advanced. They and the Russians have developed hypersonic cruise missiles, 4,000 mile. And we have no defense. As [former] Secretary [of Defense James] Mattis said, “We have no defense against these.” This could be a checkmate in a serious altercation. They built some very competent advanced submarines and anti-submarine warfare capabilities.

In addition to that, they’ve gone heavily into nonconventional warfare systems, the EMP threat, the electromagnetic pulse threat to America is vital because we lay naked, so to speak, as they set off a nuclear blast a couple of 100 miles over Omaha.

It would incapacitate most of our electrical grid for many months. And the Defense Department a few years ago said that we would lose 80% of the population in six or eight months before that could be fully repaired. We’re working hard to correct that imbalance, but we’re not there yet.

In addition to that, if you consider warfare, a new form of warfare, cyber warfare is just as important, in that it downloads our intelligence and then our top secrets.

Two years ago in a very drastic action, the Chinese downloaded our top secrets, our nuclear submarine top secrets from a submarine facility in Newport, Rhode Island. This was 600 gigabytes, I think, something like that. It was a devastating loss to us. That’s an act of war if there ever was one in a nonconventional warfare capability.

So, we are well into the second Cold War by that very act. Plus, the fact that they’ve stolen everything else we have that’s sitting around on the computers.

Their new attack airplane looks remarkably like our F-35 and probably has almost as many capabilities, probably because he downloaded our top secrets.

In addition to that, they’ve developed a tremendously capable anti-satellite capability in space where they can damage our entire GPS systems. So we would be traveling by, and if we had to fire our missiles and what have you … The Russians are with them on that. And they both have those capabilities.

We’re setting up a Space Force and we’re trying to catch up in that area, but we have a long way to go. It’s not only kinetic warfare—that’s still World War II, heavy weapons system against heavy weapons systems warfare—but the nonconventional where we face our greatest threats.

Allen: We are talking with former Secretary of the Navy William Middendorf about his latest book, “The Great Nightfall: How We Win the New Cold War.” And secretary, you’ve just laid out so clearly why China is such a threat to America today. What is America doing about this? How are we preparing to be able to meet the strength of China?

Middendorf: Well, unfortunately, if a football field was laid out, we would be on the minus 10 yard line starting a couple of years ago, because for eight to 10 years, two previous administrations had what they call a sequester, which reduced our military spending, especially for advanced weapons systems. And they took $800 billion out of our military budget and diverted it to other programs.

And one of the advanced weapons systems … are really the Virginia-class submarines, which are very silent and have the Tomahawk and Harpoon missiles. We have to accelerate the development of those from two to three a year.

And aboard that Columbia will be subject to 80% of our entire nuclear arsenal. And that’s of course, the great peacemaker. It’s an extremely silent submarine. It’s 6,000-plus miles range and these terrifically powerful nuclear warheads, which should neutralize any potential adversary.

Allen: At this point in time, is America on track? Have we recognized the true threat that China poses? You mentioned all of these actions that are sort of in the works, are we moving swiftly on these things or does America really need to pick up the pace in order to truly beat China in this Cold War?

Middendorf: As I said, we have to move much faster if we want to maintain power against China, and Russia, and Iran, and North Korea.

Also, remember this, there are 50,000 nuclear warheads, probably eight, 10 countries that have those capabilities. And there are a lot of flashpoints that I talk about in my book where nuclear warheads have been used—like India, China, Pakistan, and India.

The problem with nuclear warheads being used is that once it starts, it proliferates very fast. It wouldn’t be any time at all before retaliation occurs out of control. And in war time, all of morality sort of disappears pretty fast.

My father and uncle both served in World War I and they were told, we were all told that gas warfare would not occur. It was too devastating, but it was used instantly. Both sides were using it to devastating effect willy-nilly and it had … heavy, heavy, heavy casualties everywhere.

The same thing would be true once the nuclear war has started to be used and they will be used by some of these rogue countries, possibly, which will proliferate to the larger countries. Many of the big cities, for example, Beijing, or New York, or Los Angeles, could be reduced very quickly to ice skating rinks.

Allen: Well, sir, it’s incredible, I think, that you have chosen to take the time just with your perspective and the leadership roles that you’ve served in to write this book and to weigh in on this really pressing issue. Why do you feel so compelled to write this book?

Middendorf: I had my 96th birthday three days ago.

Allen: Well, secretary, we thank you so much for your continued service throughout your entire life to this country, for your dedication to America. And we encourage all of our listeners to please visit thegreatnightfall.com to order your copy of “The Great Nightfall: How We Win the New Cold War.”

Secretary Middendorf, Thank you so much for your time today.

Middendorf: Thank you so much.