How We Will Ward Off 21st Century Adversaries 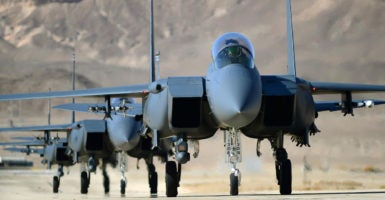 "I won’t stop fighting to protect Israel, and I will continue to do all that I can to stop attempts by liberals to weaken the country," Sen. Rick Scott writes. Pictured: A group of U.S. F-15E Strike Eagles taxi after a training exercise at Uvda Air Force Base in Israel. (Photo: Stocktrek Images/Getty Images) 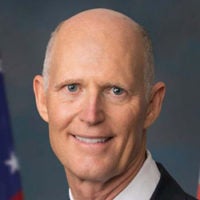 Rick Scott, a Republican, is a U.S. senator from Florida. He serves on the Armed Forces Committee and the Homeland Security and Governmental Affairs Committee

This article is part of a series on the importance of achieving peace through strength and keeping U.S. national security strong. Both long have been Heritage Foundation principles and a great foundation for America’s national power. Some voices call for reducing defense spending to focus on the response to COVID-19, but the need to fully fund our military never has been greater. Read previous entries in the series here, here, here, here, and here, and learn more about the state of our military in the 2020 Index of U.S. Military Strength.

Throughout history, nations have gone to great lengths to achieve their version of peace.

The United States, along with our many allies, respects democracy and the will of the people. We uphold individual and human rights. We value freedom above all else.

We have men and women in uniform overseas right now working tirelessly to defend our freedom and the national security of the United States and our allies from those who wish to harm us.

The United States continues to face increasing threats from dictatorships around the world that are violating human rights, stamping out freedom, and building their militaries in an effort to dominate the world stage. With numerous adversaries spanning the globe, including communist China, Russia, Iran, North Korea, Venezuela, and Cuba, there is only one way our great nation can maintain peace—through unwavering strength.

As President Ronald Reagan said in 1980, at the height of the Cold War: “We know only too well that war comes not when the forces of freedom are strong, but when they are weak. It is then that tyrants are tempted.”

The United States cannot cave to the will of our enemies. We must be clear-eyed and see our adversaries for what they are. We must be vigilant and we must be aggressive.

I want to be very clear: We are fighting for freedom and we are fighting against oppressive socialist and communist dictatorships.

My goal in the U.S. Senate is to shine light on these threats to the strength and security of the United States and our allies. We have to understand what we are up against, whether it is Iran’s aggression and hatred of Israel; Venezuela’s ruthless dictator committing genocide against his people; or communist China’s efforts to steal our technology, suppress individual freedoms—especially in Hong Kong and Taiwan—and detain more than 1 million Uighurs in internment camps because of their religion.

And we have to recognize that the freedoms we hold dear are worth fighting for.

It is my hope that freedom-loving countries around the world will stand up and defend peace as we know it, the right for commerce to flow freely and without intrusion, and the absolute need for the world’s democracies to defend freedom and human rights around the globe.

That starts with leaders in Washington who are committed to public service, committed to solutions, and committed to a prosperous and peaceful future for our country and for the world.

Over the past few years, we’ve taken significant steps to bolster defense spending.

We’ve invested record funding for our military and are well on our way to a 400-ship Navy.

We’ve recalibrated the relationship with communist China so the political class in Washington and the American people see that regime for what it is—an existential threat to the United States and our allies.

We’ve taken significant steps to reduce China’s influence in technology, infrastructure, and telecommunications in the United States and across the globe.

And we’ve shown terrorists around the world intent on violence that there will be no safe harbor, no cave that you can hide in, no respite from the watchful eye of the strongest military in the world. Qassim Suleimani would attest to that, if he could.

I won’t stop fighting until America’s economic and political future is secure from the threat of Chinese influence.

I won’t stop fighting for freedom and democracy in Latin America.

I won’t stop fighting to protect Israel, and I will continue to do all that I can to stop attempts by liberals to weaken the country by defunding critical security efforts with our greatest ally in the Middle East.

We have to stand together to make sure future generations have every opportunity to live in an America that stands for freedom and liberty here and around the globe.

We can’t forget that there is evil in this world, and it is incumbent upon all of us to stand strong and remember why it is so important that we invest in our military, stop buying products made in China, and stop trying to make nice with our enemies as politicians in Washington have done for decades.

Our safety, national security, and peace depend on our commitment to what Reagan called “our prime responsibility”—world peace.