US Can’t Be Negligent or Irresponsible in Military Funding Decisions 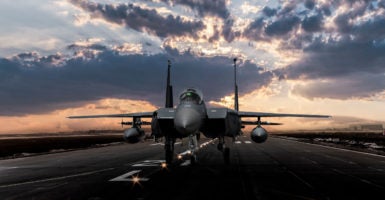 Rep. Vicky Hartzler, R-Mo, is a senior member of the House Armed Services Committee. She also is the ranking member of the Tactical Air and Land Forces Subcommittee.

This piece is part of a series on the importance of achieving peace through strength and a strong national security for the United States. Both have long been Heritage Foundation principles and a great foundation for American national power. Some voices are calling for a reduction in defense spending in order to focus on the national response to COVID-19, but the need to fully fund our military has never been greater. You can read the first piece in this series here, and learn more about the current state of our military in the 2020 Index of U.S. Military Strength.

Less than three years ago, the Trump administration announced to the world the reemergence of long-term, strategic competition. The administration asserted that the return to an era of great power competition is the central challenge to the future of American prosperity and security.

As a nation, we have allowed our competitive advantage to erode. We must reframe our perspective of national security.

China and Russia continue to challenge the United States and are exploiting what they perceive as American vulnerabilities. In the past, America has been able to project power and advance our interests globally, and we have been able to do so largely unchecked.

Today, that is an ability we can no longer take for granted.

In order to maintain our competitive advantage in the era of great power competition, we must modernize our forces. The need to recapitalize and modernize exists across all the services and in all military domains.

From nuclear to conventional, and from land to sea, we are relying on legacy platforms and weapons that must be updated to meet current and future threats.

Years of continuous combat operations and deferred modernization has created a significant crisis in military readiness in both capability and capacity.

Congress has worked diligently over the last several years to provide the funding required for modernization and to stop the downward trend in overall military readiness. We must continue this path forward in order to equip the services with the resources necessary to fight and win in their respective mission areas.

If we look at the Army, we can see how a renewed focus on modernization can drive the overall culture. The Army has taken great strides to update, modernize, and reform.

However, this has not always been the case. Army modernization funding declined by well over 50% from 2008 through 2018 as a result of the drawdown from two wars and the imposition of budget caps created by the Budget Control Act.

Across all the services, we must modernize key capabilities, recognizing we cannot expect success fighting tomorrow’s conflicts with yesterday’s weapons. Investments in space, cyberspace, missile defense, advanced autonomous systems, next generation air dominance, and hypersonics will provide our troops with what they need to win.

This investment in the future must also include funding to maintain a credible and reliable nuclear deterrent force. Our U.S. nuclear triad—bombers, submarine-launched missiles, and intercontinental ballistic missiles—are critical for our national defense. Together, they offer a flexible, visible, and, most importantly, credible deterrent to Russia and China.

The triad must be modernized. Our Ohio-class submarines and air-launched cruise missiles date back to the early 1980s, the Minuteman III intercontinental ballistic missile was first deployed in 1973, and our oldest bombers are 1960s platforms.

Even our newest component, the B-2 stealth bomber, requires attention. There are only 20 B-2 stealth bombers in our inventory. Congress must continue to support investments into the new B-21 bomber to ensure we have both capability and capacity to deter both nations.

While undergoing a complete modernization of all three legs of the triad is expensive, it is a bargain for what we get in return. China and Russia are watching what we are doing with our nuclear deterrent force and are reevaluating their war plans accordingly.

For too long, we have asked our military services to do more without providing them with the timely resources they need. Our services need to be able to buy the tools necessary to readily address the evolving security needs of our nation.

Take, for example, the F-15 C/D fleet. The health of this fleet is deteriorating at a rapid pace, and is well past its certified service life. The F-15Cs continue to fly despite serious mechanical and electrical issues. The Air Force has had to accept significant risk with this fleet as a result of the decision more than 10 years ago to cap the F-22 procurement at 187 aircraft instead of procuring the required 381.

This was a budgetary-driven decision that has had long-term strategic and operational consequences. Fortunately, Congress took steps last year to authorize the start of the F-15EX program to replace the F-15 C/D fleet as quickly as possible. It also provided additional funding to procure more F-35 Joint Strike Fighters to help improve our fifth generation fighter inventory.

There are members of Congress who have called for cutting defense spending in the wake of the COVID-19 pandemic. There is no question the pandemic has impacted the health and economic well-being of many Americans. Congress has provided more than $3 trillion to address this pandemic and is looking at future aid packages as our nation continues the road to recovery.

However, calls for cutting defense spending are not the answer. It is irresponsible, negligent, and puts the security of all Americans at risk.

China and Russia have continued their military activities and have used this pandemic to their advantage. Our enemies get a vote, and if we cut defense spending after barely swimming out of a major military readiness crisis, Congress will be failing its fundamental constitutional responsibility to provide for the common defense.

Gen. John Murray, commanding general of Army Futures Command, stated, “No service is able to go it alone, and as history has shown, joint teams win, and modernization is no exception. I’d say winning matters, but winning together matters most.”

We should not repeat the mistakes of the past. We must continue the path forward by investing in capabilities needed to ensure a credible deterrent posture now and into the future.

Congress, the military, and industry must all work together to make sure our adversaries think twice before attacking, because they know the United States has the strongest military in the world.