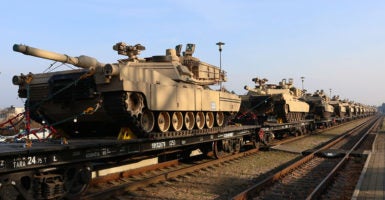 The Army has begun its Next-Generation Combat Vehicle program, which aims to replace older systems with more modern ones. Pictured: Members of the U.S. Army 1st Division 9th Regiment 1st Battalion unload heavy combat equipment at the railway station near the Pabrade military base in Lithuania Oct. 21, 2019. (Photo: Petras Malukas/AFP via Getty Images)

The U.S. Army is the world’s premier land force. Its primary role is to defeat enemy forces through conventional warfare, but it can perform an ever-widening range of functions.

But these additional capabilities require steady investment and recruitment to be effective.

In Iraq and Afghanistan, the Army engaged in thousands of operations and had to allocate resources accordingly. The conflicts began against traditional state forces, but they quickly dissolved into counterinsurgency and counterterrorism operations.

This gave the U.S. decades of 21st-century experience combating insurgencies, but it came at the cost of other vital Army functions.

That matters because, as the 2018 National Defense Strategy highlights, the current administration and Department of Defense leadership are focused on near-peer competitors such as Russia and China, and to compete with Russia and China, the U.S. needs to reinvest in the capabilities it was forced to neglect for the past 18 years.

Many of the core systems the Army uses, such as the Abrams Main Battle Tank and the Bradley Infantry Fighting Vehicle, were developed in the 1970s and ‘80s, and other nations have caught up or passed us in those areas.

The Paladin, the Army’s self-propelled howitzer, is outmatched by more modern Russian and Chinese equivalents. Our equipment is routinely maintained and replaced, but that is not the same as innovation.

Fortunately, The Heritage Foundation’s 2020 Index of U.S. Military Strength shows the news is not all bad.

The Army has begun its Next-Generation Combat Vehicle Program, which aims to replace older systems with more modern ones, and the army secretary, now defense secretary, Mark Esper has created the Army Futures Command, a new four-star command intended to oversee much of the modernization.

Those initiatives required large amounts of investment—the Army got $179 billion of the $716 billion in the 2019 defense appropriations bill, which has enabled it to improve readiness and begin to rebuild.

Procurements always will be at the mercy of political maneuvering and funding cuts, but the Army has taken some concrete steps to create new research, development, testing, and evaluation programs.

Only time will tell if they are substantial enough.