Despite COVID-19, US Can’t Afford to Cut Defense Spending 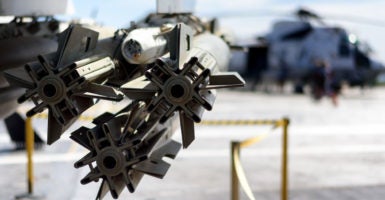 An attack helicopter armed with Hellfire missiles is parked on board the USS Midway. (Photo: Mark Thomas/Getty Images)

Rep. Elise Stefanik, R-N.Y., serves on the House Armed Services Committee and is the ranking member for the Subcommittee on Intelligence, Emerging Threats, and Capabilities.

This is part of a series on the importance of U.S. national security and achieving peace through strength. Both long have been Heritage Foundation principles and a great foundation for America’s national power. Some voices call for a reduction in defense spending to focus on COVID-19, but the need to fully fund our military never has been greater. You can read about the current state of our military in Heritage’s 2020 Index of U.S. Military Strength.

As countries across the globe struggle to cope with the human and economic costs of COVID-19, it is of grave concern that some in the United States have advocated for cuts to defense spending in order to focus on the response to the virus. This is a false choice.

COVID-19 is not the first or only global crisis that the United States has had to confront, and history demonstrates that America is able to respond simultaneously to crises without jeopardizing our national defense.

The United States has already responded with the largest economic rescue plan for individuals, families, and businesses in our nation’s history.

While we are 30 years removed from the Cold War, or 75 years from the last world war, the global landscape is more complex and increasingly dangerous. The war in Syria—or a virus in Wuhan—show that seemingly isolated crises have significant global consequences.

Similarly, state actors are no longer the sole threat to our security, as transnational crime, Islamic terrorist groups, and cyber criminals continue to threaten our national security interests.

There is broad agreement that we currently face a renewed era of “great power competition,” in which the United States’ superpower status is challenged by rising powers.

In the last few years, China has expanded its reach to the Arctic, and has built and militarized artificial islands in critical maritime shipping lanes.

An emboldened Russia annexed the territory of a sovereign state.

And the fanatical regime in Iran has at times controlled four separate Arab capitals and inflamed regional conflicts in their effort to attain regional hegemony.

Cuts to our defense spending at this time would signal to our allies, and our adversaries, that the United States in unprepared to face the increasing complexities and dangers around the world. Such a pullback would embolden our adversaries and further encourage destabilizing actions by bad actors like China, Russia, and Iran.

If our desire is to see freedom, democracy, and open economies flourish in the 21st century, we must not jeopardize our military readiness and diminish capabilities critical to protect our interests.

Recognizing this evolving global landscape, our adversaries are not pulling back and are taking steps to invest in their military capabilities. Global defense spending is on the rise, reaching a record $1.917 trillion in 2019.

Our adversaries are adding significantly to these yearly increases.

For example, China recently announced a 6.6% increase in defense spending, despite significant drops in gross domestic product due to COVID-19.

Not only are various adversaries increasing their defense spending, but they are spending that money on military capabilities that directly threaten our deployed troops and allies abroad, as well as the United States homeland.

Russia and China are both developing hypersonic missile capabilities that present significant challenges for our missile defenses.

This is why I continue to advocate for increased investment on U.S. missile defenses and an East Coast missile defense site at Fort Drum in my district in upstate New York.

In addition, these adversaries are turning to cyber operations and propaganda to harm U.S. interests at home and abroad. We must maintain adequate funding to challenge the asymmetric, or “gray zone,” capabilities as well.

Defense spending is not just for the purchasing of standard defense equipment like tanks and bombs. Our annual defense budget authorizes billions of dollars a year for critical research and development efforts that are critical to protect global health.

For example, the Defense Advanced Research Projects Agency, or DARPA, and other defense agencies and laboratories, are at the leading edge of vaccine research and development for viruses like COVID-19, as they were for Ebola treatments in the past.

Similarly, many ubiquitous everyday items and services have come from the military’s research, such as the internet and GPS.

In short, many of the things we use today are direct results of defense research, development, and innovation. When we consider our defense budgets, we must recognize how critical this investment is not just to our military, but our overall society as well.

The United States will continue to allocate resources for fighting COVID-19 in the months and years ahead, as we undoubtedly will when we confront global crises in the future. Therefore, we must spend our taxpayer dollars in a smarter, more efficient way, while addressing opportunities for savings.

Thankfully, Secretary of Defense Mark Esper was doing this before we were confronted with COVID-19. In a four-month span in late 2019, the Department of Defense found more than $5 billion in savings among the department’s 27 individual agencies, and the secretary has committed to continuing these efforts to maximize every dollar of funding across the department.

I have the privilege of serving on both the House Armed Services Committee and the House Permanent Select Committee on Intelligence in Congress, and I believe that the United States must continue to have the strongest national defense and military in the world. There is no other option.

We must not take critical resources from our men and women in uniform and those serving to strengthen our national defense to keep Americans safe.

The COVID-19 pandemic has shown us that our adversaries—like China—are simply not up to the job of being a world leader. We cannot allow them to become one.