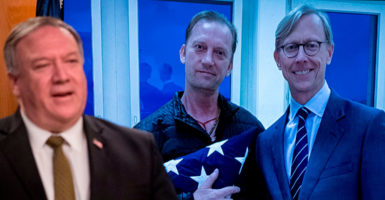 As Secretary of State Mike Pompeo speaks Wednesday at a press conference in Washington, a photo of newly released Michael White with U.S. special envoy Brian Hook, right, is displayed behind him. (Photo: Andrew Harnik/Pool/AFP/Getty Images)

The Trump administration’s lead official on Iran policy is underscoring its determination to relentlessly prosecute a “maximum pressure” campaign against Iran, which he says has yielded “excellent results.”

In a Heritage Foundation webinar Tuesday, special envoy Brian Hook criticized the “Marxist-theocratic regime” in Tehran for acting as the “principal driver of instability” in the Middle East and for what he called terrorist campaigns on five continents.

Hook also discussed the recent release of Michael White, an American jailed for two years by Iran on false charges.

Hook said the 2015 Iran nuclear agreement had failed to address those threats and actually made them worse by handing Iran sanctions relief that enabled the Islamist regime to boost its support for regional proxies and terrorist groups.

He asserted that by exiting the flawed nuclear agreement, the Trump administration had returned to long-standing U.S. nonproliferation goals that the Obama administration initially proclaimed but later abandoned in a rush to seal a deal.

But now, time is working against Iran because of the Trump administration’s willingness to escalate sanctions to unprecedented levels.

Hook referred to Secretary of State Mike Pompeo’s speech unveiling the “maximum pressure” strategy at The Heritage Foundation in May 2018, and said Iran’s regime is in a much worse situation today.

“I promise you it is crystal clear to the supreme leader of Iran,” he said.

He cited an Iranian estimate that U.S. sanctions have cost Iran $200 billion.

Hook emphasized President Donald Trump’s willingness to negotiate a more effective nuclear agreement, but added that Iran was stalling on diplomatic negotiations, hoping that Trump will not be reelected.

He said the administration is comfortable with the current situation, which is increasingly painful for the regime in Tehran.

Hook expressed a much greater sense of urgency on the need to preserve the U.N. arms embargo on Iran, which expires Oct. 18 under the terms of the 2015 nuclear deal.

“Russia and China want to sell arms to Iran, and the embargo does not suit them,” he said.

Hook predicted that if no agreement is reached at the U.N. Security Council to extend the arms embargo, then Washington would trigger “snapback” U.N. sanctions against Iran.

Hook said that White’s release, which he negotiated indirectly through Swiss diplomats, was a sign that the administration’s “maximum pressure” campaign is working.

Both Washington and Tehran deny that White’s release was the result of a prisoner swap, although he regained freedom after the U.S. deported Sirous Asgari, an Iranian scientist acquitted of violating sanctions, back to Iran.

Hook said White’s release came with no sanctions relief, no change in U.S. policy, and no “pallets of cash”—a reference to the $400 million in cash that the Obama administration transferred to Iran shortly after the release of three American hostages held in Iran in January 2016.

The Obama administration insisted that the cash was delivered to Iran as part of a $1.7 billion settlement of a decades-old legal dispute related to U.S. arms purchased before Iran’s 1979 revolution but never delivered.

The timing of the cash transfer, however, raised suspicions that the payment was a ransom for releasing the hostages.

Hook’s comments came after the release of new reports documenting Iranian cheating on its nonproliferation commitments.  Over the weekend, two closely held reports by the International Atomic Energy Agency were leaked to the press, exposing Iran’s escalating nuclear challenge.

According to the Institute for Science and International Security, that quantity is more than enough to build one nuclear weapon if it’s further enriched, a process that would take about three months, if Tehran proceeds at maximum speed.

A second International Atomic Energy Agency report confirmed that Iran also has not complied with its Nuclear Non-Proliferation Treaty Safeguards Agreement. It also expressed “serious concern” that Iran has blocked inspectors from visiting two sites and failed to cooperate with the agency’s probe into undeclared nuclear material and nuclear-related activities in the country.

Fred Fleitz, a prominent nuclear proliferation expert who formerly worked at the CIA and the State Department as well as the House Intelligence Committee, has said the International Atomic Energy Agency investigation exposed indisputable evidence of Iranian cheating on its nonproliferation commitments that was first uncovered by Israel’s Mossad intelligence agency in 2018.

The bottom line is that Iran has never complied with the nuclear deal and continues to deny extensive evidence about its clandestine program that developed plans in the late 1990s to build five nuclear weapons as early as 2003.

Although the Trump administration has left the door open for diplomacy to resolve the nuclear issue, there can be no return to the 2015 agreement.

A much more restrictive agreement is required to permanently and indisputably end Iran’s nuclear weapons ambitions.