Time Right for More Freedom of Navigation Operations in the Arctic 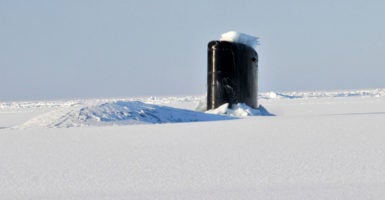 A Heritage Foundation report recommends that the Navy increase activities in the Arctic to improve its ability to operate in harsh conditions and to ensure freedom of the seas. Pictured: The Los Angeles-class submarine USS Annapolis breaks through 3 feet of ice during an exercise in the Arctic Ocean on March 21, 2009. (Photo: Tiffini M. Jones/U.S. Navy/Getty Images)

Because of the unusual nature of this patrol, the U.S. alerted Russia in advance “to avoid misperceptions, reduce risk, and prevent inadvertent escalation.”

The May 4 patrol was a much-needed freedom of navigation operation in the Arctic. These operations by U.S. naval and air forces “reinforce internationally recognized rights and freedoms by challenging excessive maritime claims,” as a report by Harvard Kennedy School’s Belfer Center for Science and International Affairs put it.

The specific mission was significant for two reasons.

First, although freedom of navigation operations are somewhat common in the South China Sea, one has not occurred in the Barents Sea since the Cold War.

The timing also was noteworthy. While the world is dealing with the COVID-19 pandemic, the Navy’s Barents Sea operation demonstrated that the U.S. military remains capable and ready.

The second reason that the operation was significant is that it was performed jointly with the United Kingdom. Although the U.K. is not an Arctic nation itself, it is the closest non-Arctic country to the Arctic Circle, making it a key player in the region. In recent years, the U.K. has been increasing its Arctic focus.

By participating in freedom of navigation operations with the United States, the U.K. showed it also takes the Arctic seriously and sent a message it remains a major power after exiting the European Union. The U.K.’s participation is also another great example of the Anglo-American “special relationship,” which has its origins in U.S.-U.K. military cooperations during World War II.

The 2017 National Security Strategy focuses on the return of big-power competition. That’s why China’s and Russia’s actions in the Arctic need to be watched.

In its official Arctic strategy published last year, China claimed to be a “near-Arctic state,” despite the fact that at the closest point, it is more than 800 nautical miles from the Arctic Circle. Creating opportunities for scientific research, military capability, and access to more natural resources are important factors in China’s recent interest in the Arctic, but its biggest motivation is economic growth.

A term also coined from the official “Arctic strategy” is the “polar silk road,” insinuating significant economic prosperity from the creation of new Arctic shipping routes and infrastructure projects. As of now, it appears that China’s interests and actions in the Arctic are solely economic, rather than for security.

Russia, on the other hand, has its eyes on militarization. The past few years have seen a heavy increase in Arctic bases, nuclear icebreakers, and military training activities.

In May 2017, Russia announced that its buildup of the Northern Fleet’s nuclear capacity is intended to phase NATO out of the Arctic.

Perhaps the next U.S.-led freedom of navigation mission above the Arctic Circle could take place along the northern sea route in international waters. France did that in September 2018 in response to increased Russian militarization in the region.

As the ice reduces for the summer months, another good opportunity for those operations will arise in the northern sea route.

The recent freedom of navigation operation is a step in the right direction, but more needs to be done, especially considering Russia’s and China’s increasing role in the region.