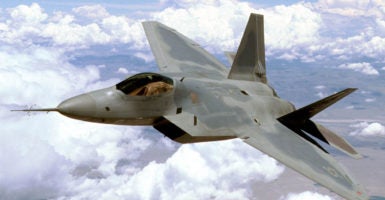 The Air Force can bring firepower to bear much faster than its sister services and can take out targets in the air, on land, and at sea. But just how much air power does the nation need?

The National Defense Strategy directed all services to prepare for a large-scale, high-intensity conventional war with China or Russia, and shortly thereafter the Air Force released “The Air Force We Need,” a report identifying the capacity and capabilities it would need to do just that.

Based on thousands of war game simulations, the plan revealed that winning such a war would require about 75 additional squadrons—including one strategic airlift squadron, seven squadrons of fighters, five of bombers, and 14 of tankers.

Since its inception during World War I, the Air Force has developed more than 40 strategic plans for putting America in good shape to win the conflict on the horizon. Unfortunately, almost none of them came to fruition. Some plans never received the necessary funding. Others were well-funded, but found to be conceptually flawed.

The plan for how the U.S. would employ air power in World War II was one of the latter type of plans. Developed in the opening days of the war, “AWPD-1” was built around expectations for the B-17 Flying Fortress. The revolutionary bomber was considered all but invincible, and its demonstrated bombing accuracy of 75 feet of the target convinced planners that the B-17 could bring Nazi Germany to its knees without the need for a major ground campaign.

Unfortunately, actual battle conditions drastically reduced bombing accuracy, and the Flying Fortress proved to be anything but invincible. Ultimately, more U.S. airmen would die in combat over Europe than Marines in the Pacific. Still, the force detailed within AWPD-1, coupled with adequate wartime funding, helped the allies win the war—the last one the U.S. has fought with a peer-competitor.

In the years since, only two strategic plans successfully improved U.S. air capacity and capability. Both plans were paired with an administration willing to fund them—and those funding periods were relatively short-lived. The Eisenhower surge in the 1950s delivered a fleet of aircraft that sustained the Air Force through the Vietnam War, and the Reagan budget surge in the 1980s delivered the vast majority of fighters in the inventory today.

Funding surges in the years beyond went to wage the Global War on Terror, leaving insufficient funds to recapitalize our air forces. As a result, the average plane in today’s Air Force is 28 years old, and our fleets of F-22As and B-2 bombers are crushingly small.

With the planning details of “The Air Force We Need” in hand, and the Trump administration’s surge in funding, it would appear the Air Force has everything it needs to do a much-needed fleet refresh. And yet, the Air Force’s plan to acquire aircraft over the next five years has actually been cut by 12 planes.

Since “The Air Force We Need” was published in 2018, procurement funding has risen by just $1.1 billion while funding for research and development has increased by almost $10 billion.

Perhaps Air Force leadership believes it can skip this cycle of technology and recapitalize when the next one comes around (assuming it does come). Based on the history of the last 60 years, hoping that next cycle coincides with an administration that’s willing to fund it may prove to be too clever by half. Deferring recapitalization is a high-risk proposition, not only for the service, but for the Joint Force and, ultimately, the nation.

The Trump administration and the Congress have provided the funding needed to start bringing Air Force capability and capacity up to expectations outlined in the National Defense Strategy. The Air Force needs to move to do just that before the current surge of funding ends—or one of those peer competitors decides to test our mettle.