It’s Not Wise to Depart From Decades of Bipartisan Agreement on Our Nuclear Triad, Mr. Chairman 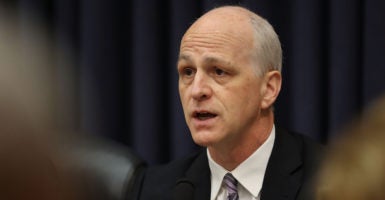 The chairman of the House Armed Services Committee demonstrated a scary lack of understanding of nuclear weapons policy Wednesday during a hearing seeking outside perspectives on the U.S. nuclear posture.

Chairman Adam Smith, D-Wash., jumped at the opportunity to attack the U.S. fleet of intercontinental ballistic missiles, known as ICBMs, calling them unnecessary for deterrence and easily identifiable targets.

Smith misunderstands the value that ICBMs bring to U.S. national security and that of our allies, which is scary given the importance of the role he plays.

Combined with bombers and nuclear-armed submarines, intercontinental ballistic missiles provide the bedrock of our nuclear triad.

Each leg of the triad has its own valuable attributes. They are complementary and together assure allies and deter adversaries. That is why both political parties have supported them for decades, before and after the end of the Cold War.

Initially skeptical, then-Defense Secretary James Mattis said in September 2017 in defense of ICBMs: “I have questioned the triad, and I cannot solve the deterrent problem [by] reducing it from a triad.”

Although ICBMs are identifiable targets, they were not meant to be stealthy. That does not mean they are not valuable.

While each of the other two legs of the nuclear triad can be destroyed with conventional weapon systems, an adversary would have to spend an inordinate number of nuclear warheads to destroy our ICBMs. Those would be warheads that would not be available to destroy other targets in the United States.

Attacking our ICBMs also takes away all plausible deniability on the part of U.S. adversaries, as nuclear expert Frank Miller pointed out during the hearing.

We will know when the U.S. homeland is under attack if ICBM fields are attacked. We may not know with such a certainty right away if we lose a submarine or a bomber.

Eliminating the ICBM leg of the nuclear triad would allow our adversaries to focus their efforts narrowly on compromising other U.S. nuclear systems, including bombers and submarines.

Our bombers don’t even routinely fly with nuclear weapons. Some argue that the U.S. can upload additional warheads on our submarines to maintain the same target coverage. But adding warheads to submarine-launched ballistic missiles reduces their range because they get heavier.

That could have negative consequences for the survivability of our submarines, since adversaries would have to search a smaller area compared to when the submarines had fewer warheads.

Reducing the number of missiles would not substantively reduce costs associated with the ICBM program. The missiles are the least expensive leg of the triad to operate.

And even at the peak of nuclear weapons modernization efforts—for our warheads and delivery platforms—the U.S. will not spend more than 6.5 percent of the Defense Department’s budget on such efforts, an amount that is a decreasing portion of the entire federal budget.

Skepticism and debate are healthy. Interpreting opinions as facts is dangerous.

Today’s international environment demands that the U.S. modernize ICBMs, regardless of what Smith thinks.