The Challenge of Modernizing Nuclear Weapons 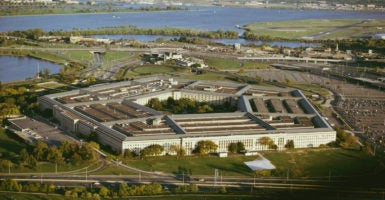 Gen. Robin Rand, commander of the Air Force Global Strike Command, offered a robust defense of the United States’ follow-on intercontinental ballistic missile. He argued that extending the life of the currently deployed Minuteman III ICBMs would not be cheaper than building a follow-on ICBM.

Reliability and survivability are increasingly challenged in the current system, which was developed during the 1960s and 1970s. Rand mentioned how U.S. ICBMs complicate adversaries’ targeting because of their quantity and geographic dispersion, also mentioning how they provide the president with a timely response option.

In combination with other elements of the nuclear triad, strategic submarines, and bombers, the system forces adversaries to spread their resources to take into account each of the legs of the triad as opposed to focusing on defeating one or two strategic systems.

Later, Robert Soofer, deputy assistant secretary of defense for nuclear and missile defense policy, argued that Russian violations of the Intermediate-Range Nuclear Forces Treaty are not sustainable and that the United States must take action and increase pressure on Russia on this issue.

He is correct. Russia has been using its violation to sow political discord within NATO in an effort to drive a wedge between the United States and its allies. Allies continue to be critical to U.S. national security interests.

Additionally, in the upcoming Nuclear Posture Review, the administration will have a unique opportunity to reassess a number of the Obama administration’s misguided nuclear weapon policies insofar as they were based on an assumption of a fundamentally different, and friendlier, relationship between the two countries.

The United States finds itself consistently underestimating North Korea’s ballistic missile capabilities and the speed with which they are developed.

The United States currently fields the ground-based midcourse defense interceptors, the only system to protect the U.S. homeland from the North Korean long-range ballistic missile threat. The program achieved a successful intercept last week, for the first time ever demonstrating a capability to shoot down an ICBM target.

Submarines are the most survivable leg of the strategic triad. To help manage cost concerns, the Navy and the Air Force are exploiting missile commonality. Additionally, the United States and the United Kingdom continue their cooperation on the Trident D-5 submarine-launched ballistic missiles.

Finally, James MacStravic, performing the duties of undersecretary of defense for acquisition, technology, and logistics, offered a strong defense on the need to continue nuclear weapons modernization and recapitalization of the nuclear triad.

If modernization efforts do not continue, the United States runs “the risk of creating critical capability gaps as legacy systems reach the end of sustainability—negatively affecting the credibility of the nation’s strategic deterrent.”

Stability of the supply chain and modernization of the command, control, and communications networks were other topics of a great interest to members of Congress. Rightfully so. The United States must ensure secure and reliable communications, including in crisis situations.

Similarly, it is essential that microchips and electronics in the upcoming modern systems are not compromised.

In sum, there is no shortage of challenges for the Department of Defense, the administration, and Congress as modernization of the nuclear enterprise continues.

The hearing outlined important challenges that the nuclear weapons modernization program will face in the future. The administration and Congress must work together to ensure the U.S. nuclear arsenal remains safe, secure, reliable, and militarily effective.