Uncertain Times Are When We Most Need Steady Defenders. So Why Hurt the Pentagon Now? 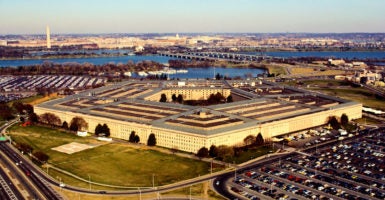 Despite the public health and economic fallout of the coronavirus pandemic, cutting funds to the Pentagon is neither the safe nor suitable response. (Photo: Glowimages/Getty Images)

This is one in a series on the importance of achieving peace through strength and keeping U.S. national security strong. Both long have been Heritage Foundation principles and a great foundation for America’s national power. Some voices call for reducing defense spending to focus on the response to COVID-19, but the need to fully fund our military never has been greater. Read the first and second entries in the series here and here, and learn more about the state of our military in the 2020 Index of U.S. Military Strength.

The usual critics of defense spending have now cited the coronavirus pandemic and domestic unrest as a new basis for reducing funds to the military. Reducing defense spending would make our country less safe, embolden our adversaries, and set a negative precedent for our allies to follow.

Now more than ever, it is important to remember that the internal crises our country faces do not diminish the many international issues that threaten the safety and well-being of American citizens.

Each day there are evolving, urgent threats to our national security. Our adversaries continue to grow in military power and increase their aggression.

Tensions between the United States and China are at an all-time high.

North Korea continues to test intercontinental ballistic missiles that are increasing in strength and accuracy.

Relations between Iran and the U.S. were so strained that many feared America was on the brink of war just a few months ago.

We face myriad outside threats, and the Department of Defense is an integral part in ensuring safety and peace through strength when confronted with such threats.

In 2013, automatic budget caps triggered a policy called sequestration. I voted against the Budget Control Act of 2011, which put these caps in place, and have been one of its fiercest critics on Capitol Hill since it went into effect.

Under the sequestration, the Pentagon faced serious, arbitrary, and lethal cuts to its funding. As a result, not only did the Pentagon fail to reach long-term modernization goals, but immediate military readiness was also hindered as training funds were slashed.

Even in 2020, the effects of sequestration still linger as the Pentagon races to maintain its international status as a military technology pioneer.

Sequestration is not the only experience that has taught us the importance of sustained defense funding. When the Pentagon is forced to operate under continuing resolutions, military readiness falters as well.

The world is not becoming a safer place. As new threats to national security appear and evolve, it is the military’s job to protect the lives and freedoms of American citizens.

The coronavirus has profoundly altered the nation, and we must adjust to those changes, but slashing the defense budget to fund adjustments is not the way to improve our country’s safety.

Budget cuts to the Pentagon in the past decade have made it abundantly clear that reducing military spending weakens the military’s ability to produce personnel and technology ready to protect the American people.

Reducing the military is neither a safe nor suitable response to the coronavirus pandemic. In these most uncertain times, it is important to have a sustainable source of protection for our nation. Maintaining steady defense spending will provide just that.