After a Lull, Islamist Terrorism in Europe Returns With a Vengeance 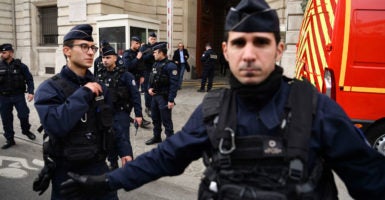 There’s lots of talk in Washington about the Islamic State and the Trump administration’s Syria policy.

That’s an important discussion to have, but it’s only one part of the counterterrorism discussion that America has to be engaged in.

Consider events in Europe over the past week. On Oct. 3, an information technology specialist, Michael Harpon, stabbed four of his colleagues to death and injured two others before being fatally shot.

Harpon, who worked at police headquarters in Paris and had a security clearance, was seemingly inspired by the Islamic State, known as ISIS.

He was a convert to Islam who, ironically, was employed in a department of the police that dealt with the Islamist threat facing France.

Harpon was known to have voiced extremist sentiments, including defending the deadly al-Qaeda raid on the magazine Charlie Hebdo in January 2015, and to have been in contact with radical preachers.

That naturally prompted questions in France as to why he was employed by the police.

Then, on Monday evening, a Syrian refugee hijacked a truck and plowed it into cars waiting at an intersection in Limburg, in western Germany. He injured eight people in what is being treated by the state as an act of terrorism.

The perpetrator, who arrived in Germany in 2015, had previously been arrested for a series of non-terrorism crimes.

Much about those attacks was unsurprising. While the Islamist threat in Europe has—for now—diminished from its 2016-17 peak, plots are still an alarmingly regular occurrence.

Terrorists have been willing to use a variety of different weapons, no matter how unsophisticated. Heritage research has specifically focused on how to stop vehicular attacks, which have been deployed frequently by terrorists and are among the toughest plots to thwart.

The events of the past week occurred in Europe, but they easily could have been in the U.S., the nation that symbolizes what Islamists loathe most about the West (manmade law, democracy, and individual liberty, for example) and is still the most appealing target.

There have been well over 100 Islamist plots against the homeland since 9/11. As recently as Aug. 30, a naturalized U.S. citizen originally from Pakistan was charged with planning an ISIS-inspired attack in New York.

That plot may been a dud, but attacks in recent years—such as those in San Bernardino, California (2015); Orlando, Florida (2016); and New York (2017, twice)—did evade the attention of U.S. counterterrorism authorities.

Safeguarding American security begins at home, but it certainly does not end there.

The U.S. cannot be everywhere and fight every war. Furthermore, the U.S. government is right to focus on great-power politics. North Korea, Russia, Iran, and China all require Washington’s attention.

But that doesn’t mean that the ongoing threat from global Islamist transnational terrorism can go unaddressed. Syria is an obvious concern. But then again, so are Afghanistan, Yemen, and Somalia, while other Islamist movements simmer across Africa, South Asia, and Southeast Asia.

Groups such as ISIS, and all those drawn to its nightmarish ideology, retain a willingness to kill innocents in as large a number as possible. The U.S. government must stand ready to help stop that from happening, both at home and abroad.